Legion Pizzeria in Kennesaw is serving unique pies that the owner says you can’t find anywhere else in the state. 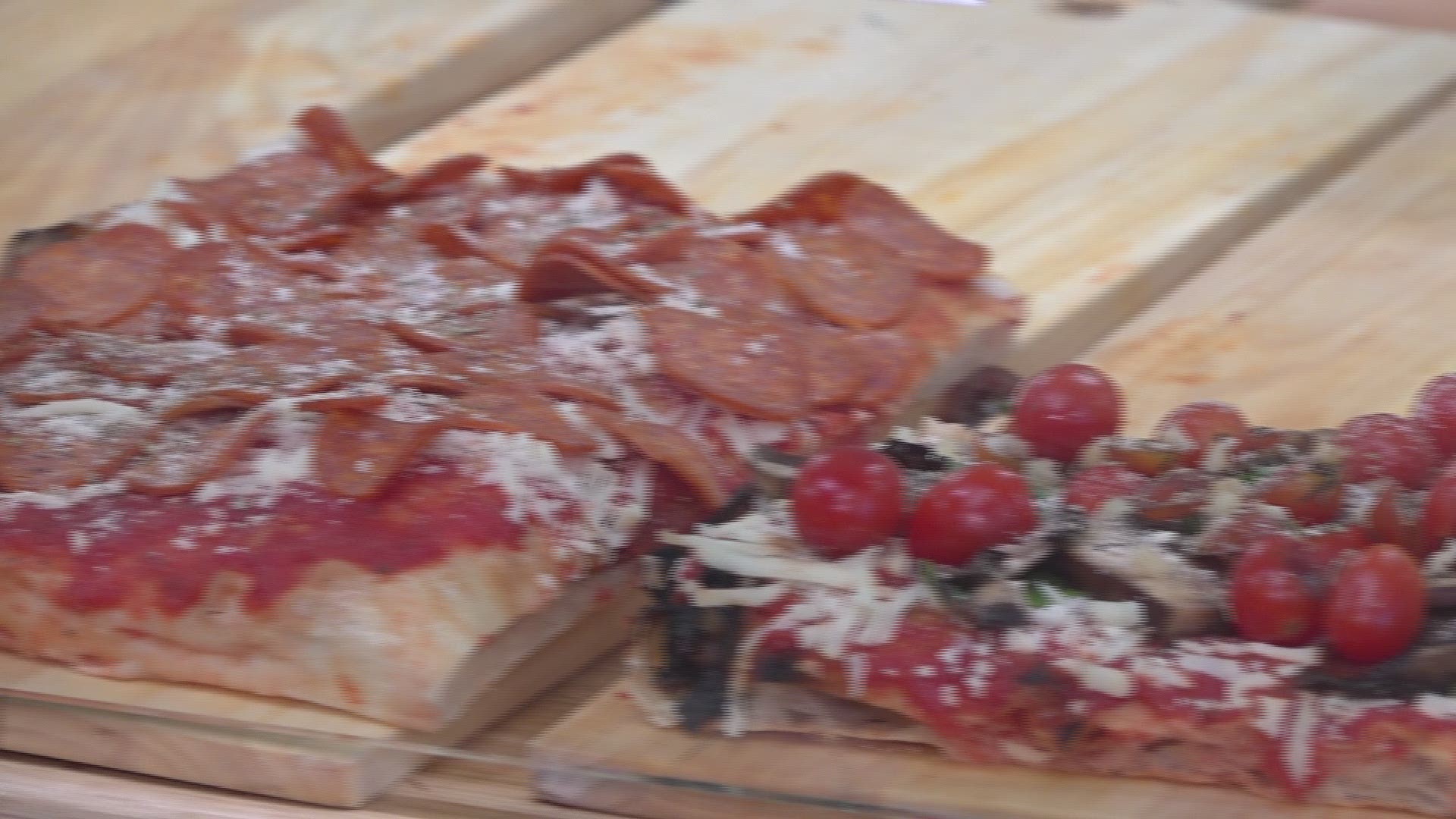 KENNESAW, Ga. — When it comes to pizza, there are many different types - Neapolitan, Chicago deep dish, and New York-style, just to name a few. But that only scratches the surface of the savory dish which is served in millions of restaurants worldwide.

“Roman-style pizza is something I discovered when I was a young man backpacking through Europe,” David DeSantis, owner and founder of Legion Pizzeria, said. “Italy has all these different varieties of pizza. They have the Neapolitan-style, the Sicilians-style, but Rome also has its own unique style of pizza, and it's a bit thicker. But even though it's thick like Sicilian, it's light as air inside, unlike Sicilian which is dense.”

The secret, he said, is in the fermentation process.

“Roman-style dough, we ferment it first in a bit batch for about 72 hours, and then for 24 more hours after it's divided in size, so a total of 96 hours of love and fermentation goes into this dough before it ever sees a customer,” he said. “Normal pizza dough is just proofed for about 11 to 20 hours. The other thing about Roman-style Pizza that makes it completely unique is it’s a high hydration dough. Most normal pizza dough per pound to flour has about half a pound of water, or 50% water to the flour. Roman-style dough is 80% or more hydration, water. And if you add all that water right into the batter, it turns into pancake batter, and I did not know about this.”

DeSantis said he uses a special flour that is imported from Italy.

“It's not grown under the same standards as the US crops are with all the chemical treatments,” he said. “In Italy, it's against the law for them to put all the chemicals on the fields.”

DeSantis said he kept experimenting with the dough and kept ruining bags of imported flour. Eventually, he sought help.

“I'm like ‘Jesus, I've made pizza for so long, why can't I get this?’ So I signed up and I went and I was actually professionally trained at the Roman Pizza Academy, and that's where I learned to put ice into the dough recipe,” he said. “The freezing cold ice with the cold water thickens the dough in the mixer so that it's manageable.”

That, he said, is the magic that goes into his pizza. But that’s not the only characteristic that makes Roman-style pizza so unique.

“Neapolitan and the other traditional styles of pizza require a wood-burning high-temperature oven, which has been around since the beginning of man,” DeSantis said. “The Roman-style pizza requires an electric oven, and we ordered a special oven that was handmade in Italy.”

Legion Pizzeria, which opened in November, has been well received, despite some customers requesting a thin crust, DeSantis said.

“I actually have to talk a lot of people into staying and trying it,” he said. “The funniest thing is the look on people's face when they first bite into it and they hear that and feel that crunch. The crunch is unbelievable. There's a little bit of char on it, which gives it a little bit of characteristic. I mean this is a very high-level pizza. This is grown-up pizza, you know what I mean? This is not pizza for your little kids, although kids do seem to like it too.”

The menu currently features 23 different varieties of pizza, all of which are available by the slice, in a half sheet, or in a whole sheet. And it’s not just pizza on the menu.

“We do a traditional cannoli in shell,” DeSantis said. “We have three different creams that we make based on my grandmother's recipes. We do a vanilla cream. Real lemon zest, vanilla, tons of powdered sugar. It will make you diabetic. We've got the pistachio cream. We make pistachio butter and fold into the recipe. And we have chocolate that we put Hershey's cocoa in with, then fold it into the cannoli cream.”

But, he said, traditional cannoli did not seem like enough. So Legion also offers a dessert based on something DeSantis said his grandmother came up with.

“When we were kids, she told us it was Italian ice cream,” he said. “She would take the cannoli cream and put it in a bowl, crush the cannoli shell over the top, and we would eat it with a spoon. So I made a recipe called the cannoli cup that's inspired by Nana.”

DeSantis said he stands by all of his food and is happy to refund a person’s money if they do not like what they order. Those who eat at Legion should know that a portion of the proceeds is used to save animals.

“Friends to the Forlorn Pitbull is our philanthropy. We even have a pizza named the Friends to the Forlorn Pizza. It's an all-vegan pizza because the owner is vegan,” DeSantis said. “We decided to actually pick philanthropy so that we could give sizable donations and that I could really feel like was making a difference in something, something we could see, something that was hands-on, and something that was local. I plan on trying to save a dog's life every week in this pizza shop, whether we sell the pizza and give that percentage to the rescue or not, the rescue is going to get the donation because it's the right thing to do.”

DeSantis said he does not care about making money. His goal is to bring joy to the community and make a positive difference in Kennesaw. And, if you’re wondering about the name of the restaurant, here’s a hint: it comes from a Ridley Scott film.

“The name Legion came from my love of Roman military history,” DeSantis said. “My very favorite movie is Gladiator. On the wall up there, it says strength and honor, and it's not just because I love the movie. I think that it's important to have those two things when you're an entrepreneur. You have to be strong to be an entrepreneur. You have to be able to saddle up a rhino and go for a ride because you never know where the day is going to take you. Being an entrepreneur means you're creating something from scratch, but you also have to have honor. And I believe, especially in Kennesaw, Georgia and really this whole northside of the Atlanta community, we have a very high level of standards in the community, in family, in honor. And there are a million people out there that are in business trying to make money that don't have any honor. All they're interested in is making a buck, and that's just not me.”

Pet of the Week: puppy with broken foot