Over one-hundred residents participated in the two-mile march that ended on the front lawn of East Point City Hall. 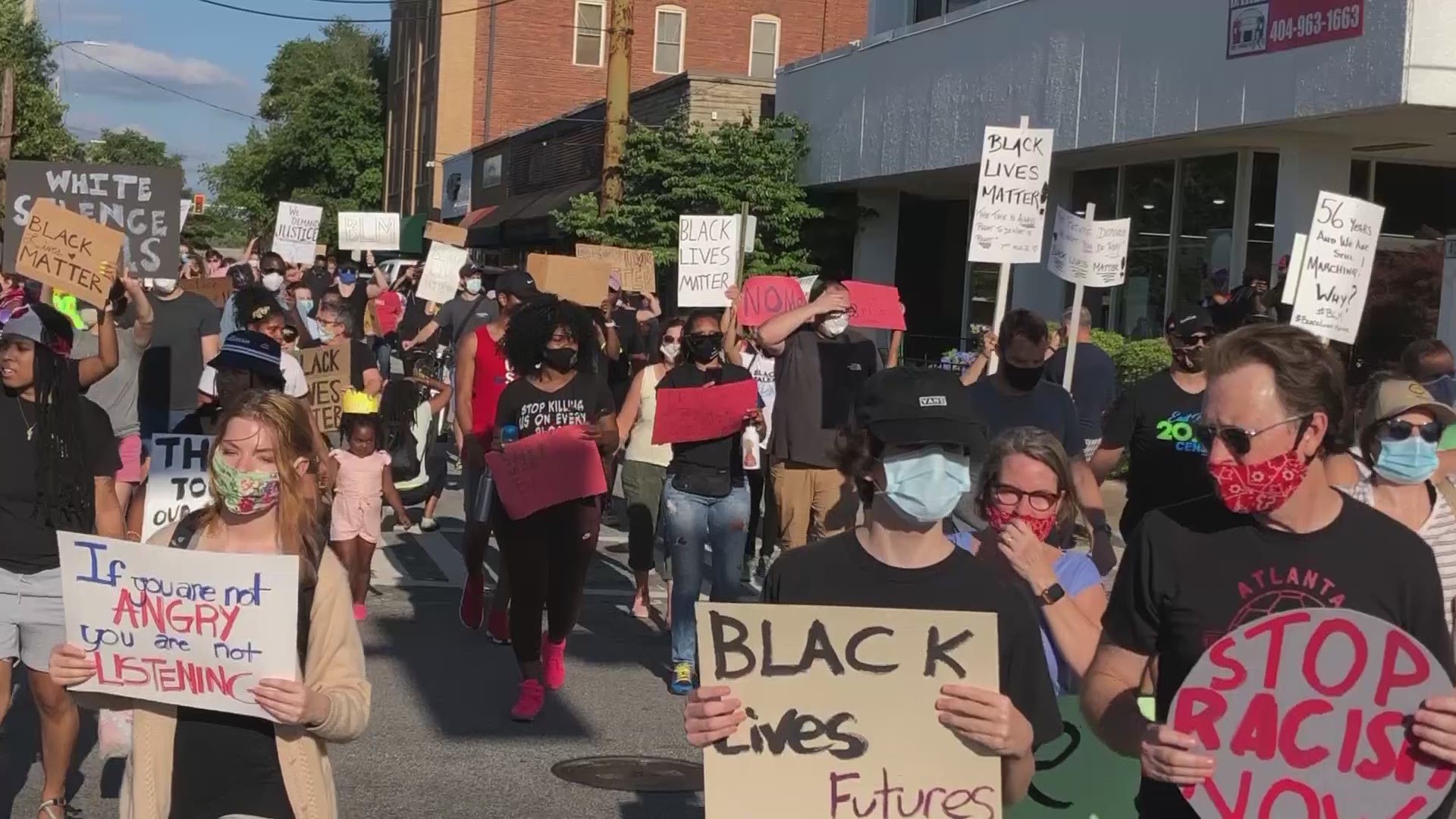 EAST POINT, Ga. — The pre-event congregated at Sumner Park off of Norman Berry Dr at 5 p.m. This earmarked the first community-wide march to occur in the city.

Dozens of residents were on hand, making banners and signage in a large grass field. There was an electricity in the air, but the mood was far from joyful.

For the majority of the residents in attendance, Thursday’s event probably consisted of the largest gathering many of them had been to in months.

Credit: Attendees at the East Point Step Up Protest & March Against Police Violence

The event organizers, Lacie Pierre, Jarrett A. Bell, and Liz Peña who are all East Point residents were compelled to coordinate the event in light of the recent incidents of Black men and women dying at the hands of law enforcement or would-be vigilantes.

“We organized this march because of a litany of recent violent events against unarmed black citizens and are marching for justice for those victims which include former East Point resident Jamarion Robinson,” said event organizers.

Before the march began at 6 p.m., Lacie Pierre and Jarrett Bell introduced themselves to the crowd. Both of them passionately restating the reason for the event.

Credit: Attendees at the East Point Step Up Protest & March Against Police Violence

The organizers even allotted a few minutes of open mic to allow the members of the community and community leaders, the opportunity to speak.

After a brief prayer from a local pastor, Monteria Robinson took the microphone. Robinson is the mother of Jamarion Robinson, the victim of police violence who was shot nearly 80 times during a warrant arrest back in 2016, right here in East Point.

Robinson’s speech was just short of a primal scream as she recounted the tragic events that befell her son nearly four years ago. She maintained her passion as she punctuated the importance of marches like this.

Jamarion Robinson was only 26-years-old when he was killed. He joined the continuing expanding litany of names that began back in 2012 with Trayvon Martin and continues to this day with Ahmaud Arbery, Breonna Taylor, George Floyd, Manuel Ellis, and Tony McDade.

The march began from the rear side of Sumner Park and traced the path that lead through the residential neighborhoods and they headed toward City Hall.

Credit: Attendees from the East Point Step Up Protest & March Against Police Violence

The passion and fervor of the crowd only continued to grow as they approached city hall without once ever spilling over into discourse. As the march concluded on the front lawn of East Point city hall, the crowd listened to final speeches from organizers and community members.

In a touching gesture of solidarity, the crowd took a knee for seventy-six seconds of silence, one second for every bullet that hit Jamarion.

The organizers reaffirmed to the crowd that their homegrown coalition would continue to plan events such as this for the community.

For more information about the East Point coalition, you can follow at @eastpointstepup on Instagram and Twitter or if you are interested in joining their coalition newsletter or volunteering for a future event, email them at eastpointstepup@gmail.com.