Neighborhood comes together to battle city over massive sinkhole

The hole, which looks at least 40 feet wide and 15 feet deep, can be spotted quickly when turning onto James Street. 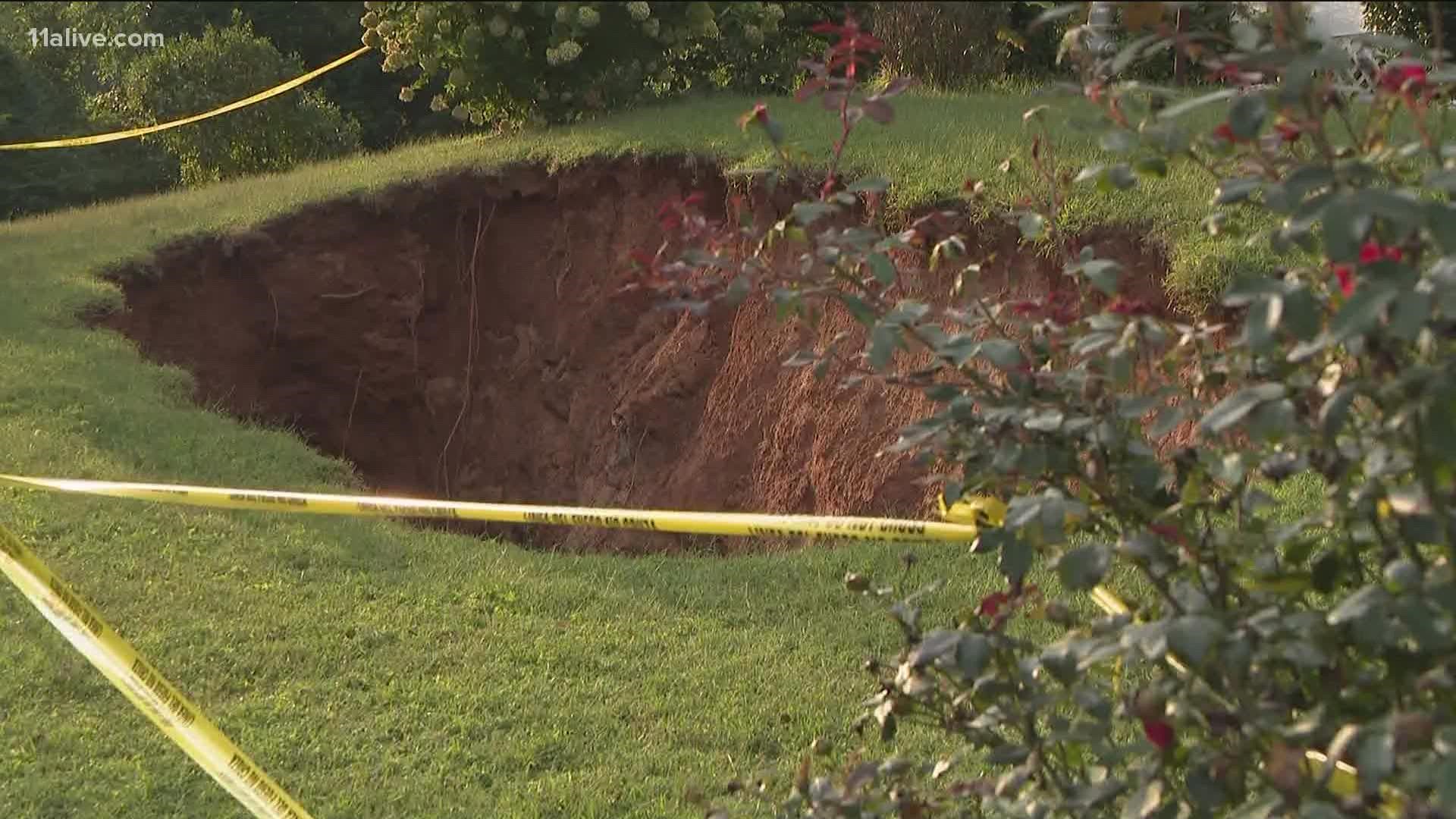 MARIETTA, Ga. — A large sinkhole opened up in the front yard of the Marietta home where Marian Tiller Chancellor lives. It turned up after the heavy rain from last week.

The city has said it's not responsible for fixing it so neighbors are coming together to try and find a solution.

"Wednesday morning on my way to work, I come out to go to work and look to my right, and there it was," said Tiller Chancellor. "Wow. That's all I can say. Wow."

The hole that's at least 40 feet wide and at least 15 feet deep can be spotted quickly when turning onto James Street. As of Tuesday, yellow tape was put up around it.

"I don't want anyone to get hurt because the hole was that big," she said.

Neighbors gathered around the sinkhole on Tuesday and told 11Alive they've been calling the city and councilmembers to get funding help for the homeowner who was out of town.

James Nelson's parents built a home in the neighborhood in 1957. He remembers when pipes were put in during the 1960s, to cover the creek.

"It used to be like this when I was growing up except it was all the way to the street. Cobb County fixed it, now it's falling in and the city is saying it's not its problem," he explained. “When I was a small kid we used to play in this thing, our parents were trying to get them to fix it, they wouldn’t do anything. Here we are again 52 years later."

In a statement, the city said:

“The City has met onsite with one of the property owners, Ms. Evelyn Baker, and explained that the sinkhole and related drainage pipe is on their private property. The pipe was not installed by the City, but was originally installed in the subdivision by a developer when it was located in unincorporated Cobb County in the 1960s. City staff is providing engineering assistance and checking to see if the homeowner is eligible for any federal or state funding relief. State law and local ordinances prohibit local governments from spending public funds to enhance or improve private property.”

James Dodd's father helped build the neighborhood decades ago. He lived off of Tower Road when he was just four years old.

"I think there is a responsibility on the city of Marietta because they own it – we were annexed into the city. So we bought into everything that was here. It's like buying a piece of property – whatever condition the property is when you buy it, it's yours," he said.

His father represented Ward 5 on the Marietta City Council from 1993 to 2001. He also remembers when the pipes were put in place.

"During many days when it’d rain hard, you’d have puddles here 5-6 inches. So to correct that – it had to be the county back then – they came in and why they would get it so far into private property to dig this ditch that deep, and put pipe in there that large... it's hard for me to understand that," he said.

He explained that years ago the City of Marietta had a program where it would pay 40% and the property owner would pay 60% for property damages like a sinkhole.

"That is no longer in existence so we're left ... we're left out in the cold," he added.

The sinkhole is just part of a neighborhood-wide problem. Other residents' homes flood constantly due to the piping and lack of shrubbery in some areas to keep water flow under control.

"They should make these solid, concrete pipes," said Nelson. "Over [by where the sinkhole developed], they put metal so after 52 years it's deteriorated and we don't want it to happen again."

"Once they got some grading done, you can understand what happens when the rain hits. It's a straight shot right down where the leafy area is," added Dodd.

Several neighbors have called the City of Marietta and council members for solutions. Councilmember Reggie Copeland, who is running for re-election, made it out there Tuesday.

“I was here for moral support and to see if there’s something possible the city can do," Copeland said. "As you can see it’s a large sinkhole. No idea how much it would cost but if I had to guess somewhere $75,000 north.”

Although the city explained that some ordinances prohibit local governments from spending public funds to improve private property, Copeland said there might be a community development grant the homeowner could apply for.

In the meantime, engineers and public works have been out to the property to assess the damage.

"We're seeking information to analyze and make predictions on which direction to go in," added Copeland. "We haven't made any promises."