He hid with his two kids and pregnant fiancée under a mattress. Now, they’re wondering what’s next after Newnan tornado

Some residents, like Michael Phillips, are still trying to adjust. 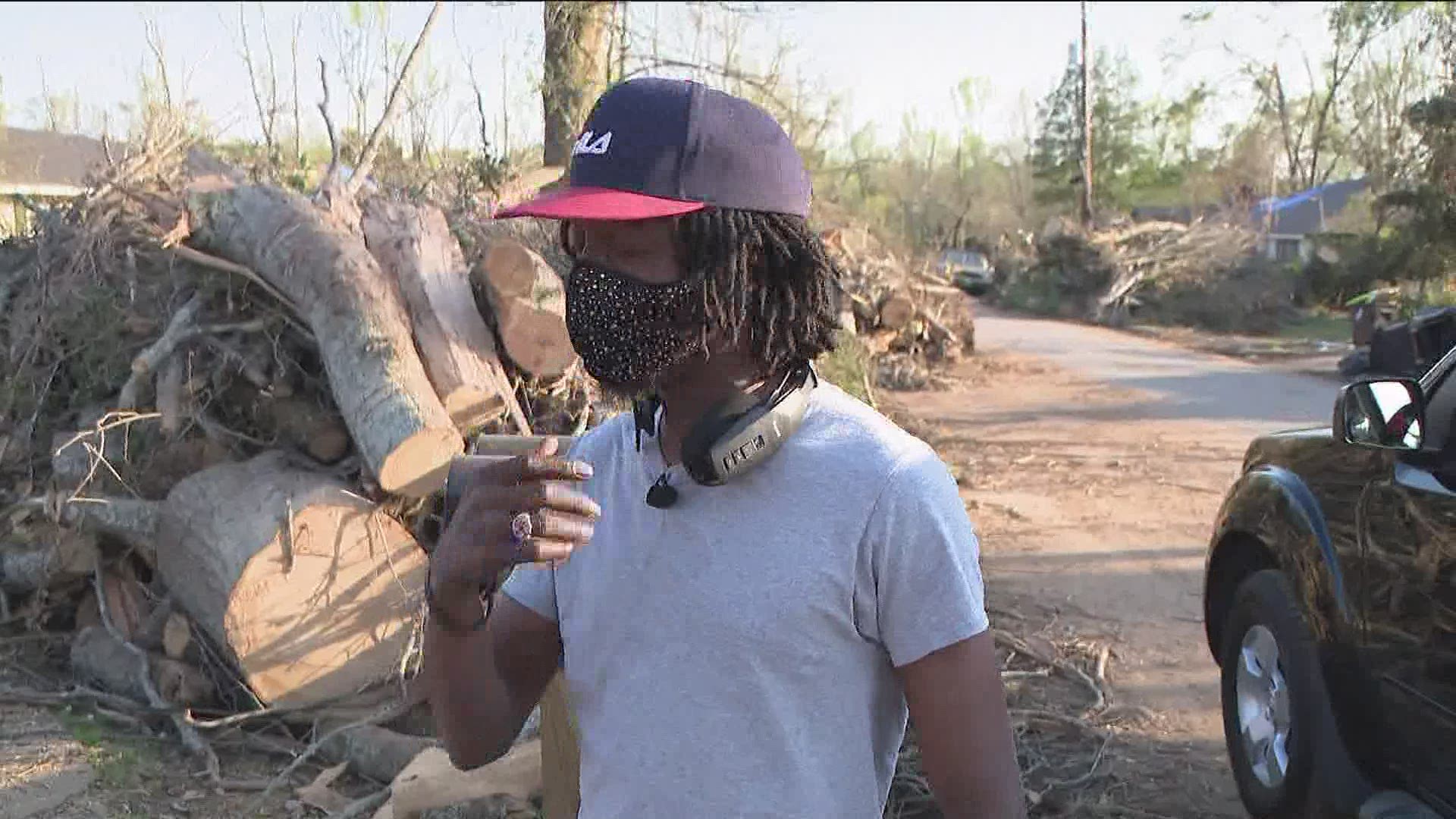 NEWNAN, Ga. — Newnan families are still recovering from the EF-4 tornado that wreaked havoc in the community.

Some residents, like Michael Phillips, are still trying to adjust. Phillips returned from work on April 6, but like so many in Newnan, going home isn’t that easy.

“Newnan‘s never went through a situation this bad,” Phillips said, watching his two young sons play with sticks in the backyard.

On March 26, when the tornado ripped through the city, Phillips could only think of protecting his family.

Walking over to the door of the duplex he rents, Phillips grabbed the door and mimicked  his actions that night.

“It was roll call, everybody in the basement. I was holding onto the door until I couldn’t hold it and when he got to the point where I couldn’t really hold it, a limb came down and hit the car.”

Pointing to a mattress sitting on top of a pile of trees, Phillips continued.

“The same mattress that sitting out there on the trash is the same one I used to cover my kids, my fiancée, and her mom, and my uncle with. First thing I say when I come out and it’s explicit, but [expletive]."

The days that followed meant Phillips was borrowing chainsaws to cut down limbs, welcoming the people that drove by and offered help. For four days, he relied on a generator and the generosity of organizations helping any way they could.

“I mean, for four days it was hard for them to even get food and water down this road,” Phillips said, who lives off Watson Drive near Newnan High School.

Phillips currently rents his home and didn’t have renter’s insurance, which he said was “naïve” of him. But, he also lost both of his cars, which he just paid off. And now has a brand new car note, on top of trying to figure out where to go next.

Currently, he, his pregnant fiancé, and two kids are staying in a hotel.

“It’s just a major setback not to have somewhere to go to," he said.

Phillips said conversations with his landlord have been unproductive, and his car insurance company is taking a while to help get him reimbursed.

“It’s been almost two weeks and I’ve talked to them three times.”

However, he’s grateful for the help he has received. Red Cross gave him and many others 12 days worth of vouchers for support. But when that runs out, he’ll be paying for everything out of pocket.

“When you have to take all your little savings that you think you got and spend it on something you gotta have, it’s a different story then.”

And, Phillip’s filled with questions. The same questions many on his street have: What to do next? Who do we go to now?

“Newnan definitely need some help there’s a lot of people that’s not going to be right for a while because they’ve lost almost everything," he said. "The city leaders, they probably have no idea what to do next. When you get to the point where it looks like a bomb dropped outside, what do you do?”

People continue to help each other, lending chainsaws that run late into the night, checking in to see what neighbors need. A donation drive will take place Saturday at the nearby Texas Roadhouse and organizations like Bridging the Gap continue to hand out food and supplies.

Soon, FEMA is set to start assessing damage of more than 1,700 homes and buildings that have some form of damage. It will take time for Newnan to repair and rebuild what was damaged.

And although the last few weeks have been a struggle for Phillips and his family, he’s happy he has a job and that his kids and fiancée are smiling. Everything else, he said, will fall into place eventually.