Authorities are reporting several injuries after a nine-car accident that sent one vehicle into a restaurant in Lumpkin County. 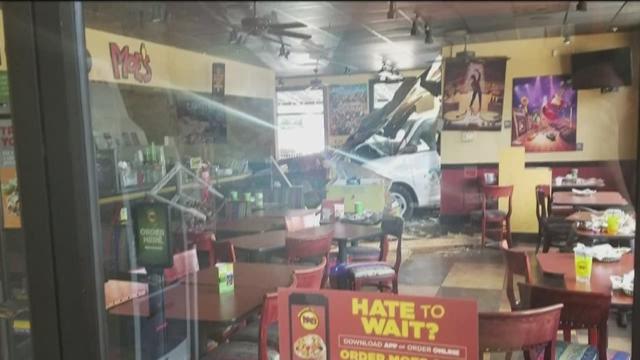 DAHLONEGA, Ga. -- Authorities are reporting several injuries after a nine-car accident that sent one vehicle into a restaurant in Lumpkin County.

The accident happened on Monday at around 1 p.m. in the area of Morrison Moore Parkway. Authorities said one of the vehicles involved, a large van, ultimately went through a wall at a nearby Moe's restaurant. Initially, Moore Parkway was shut down between South Chestatee Street and Alicia Lane but the roadway has since been reopened.

The accident has been turned over to the Georgia State Patrol (GSP) for investigation. The agency's preliminary notes updated the number of vehicles involved from seven to nine. So far, authorities believe the van that slammed into the restaurant was also the one responsible for the initial chain-reaction crash.

Lumpkin County Sheriff's Office Lt. Alan D. Roach reported several serious injuries. The GSP initial report later elaborated that two people inside the restaurant suffered minor injuries and one city worker was injured when he dove out of the way of the vehicles during the crash.

Two people were also taken to Chestatee Hospital while three others were sent to Northeast Georgia Medical Center in Gainesville, Georgia. Both Lt. Roach and the GSP report that none of the injuries appeared to be life-threatening.