A Notre Dame alumna spoke out against the school chaperones' decision to make the students leave a play after learning two cast members were playing a gay couple. 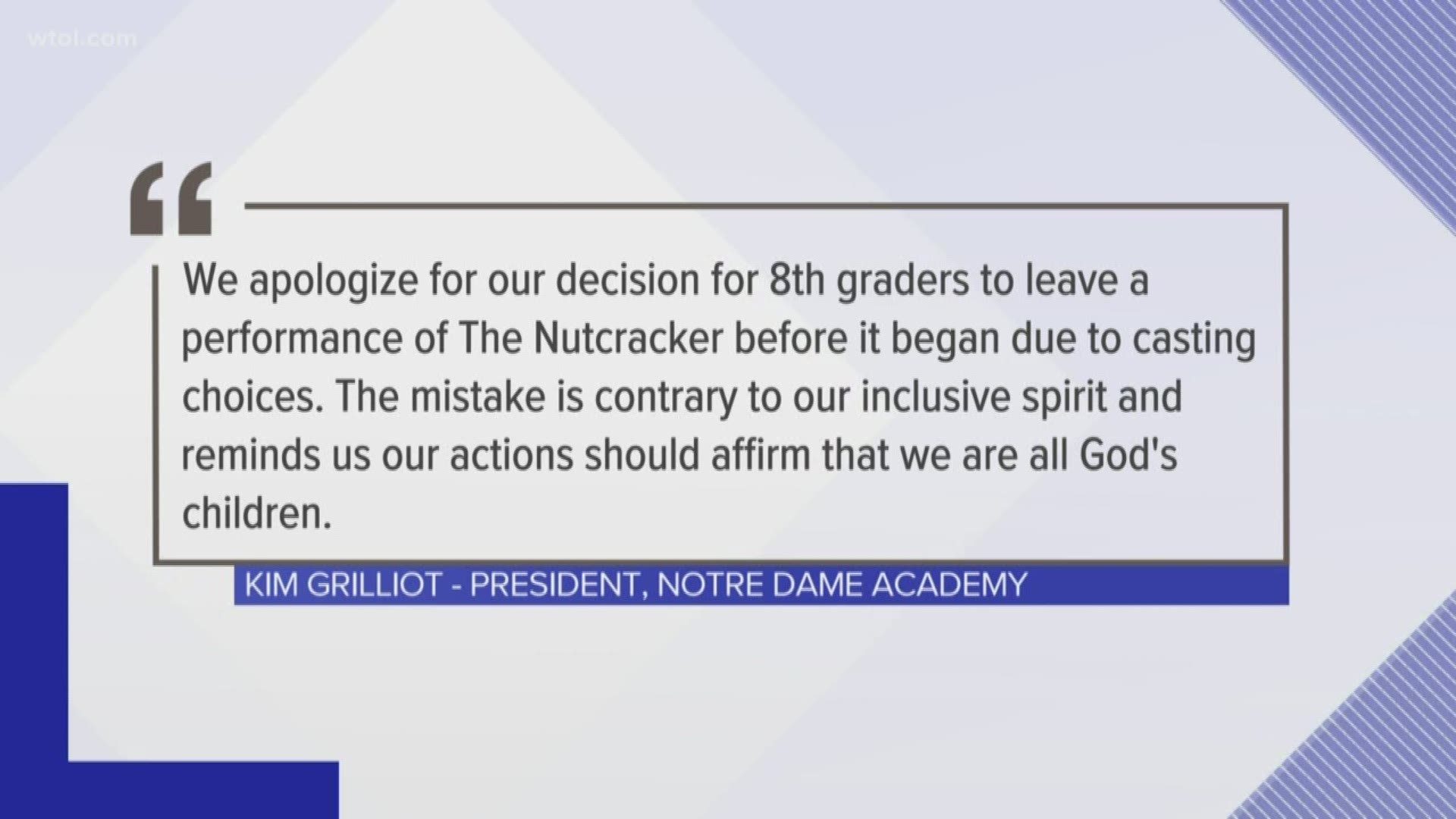 TOLEDO, Ohio — A Twitter post calling out Notre Dame Academy chaperones' decision to make eighth-graders leave a play in Chicago because two of the cast members were playing a gay couple has gained attention and even sparked a response from the institution's president.

In a series of tweets, Carly McGoldrick, who identified herself as a school alumna, said she was "waiting for NDA to refund the parents of their students for the cost of tickets and to issue an apology for embarrassing them in front of an entire auditorium."

In response Tuesday, NDA students painted the spirit rock outside of the school in rainbow colors with the words, "God Loves You" prominently displayed. 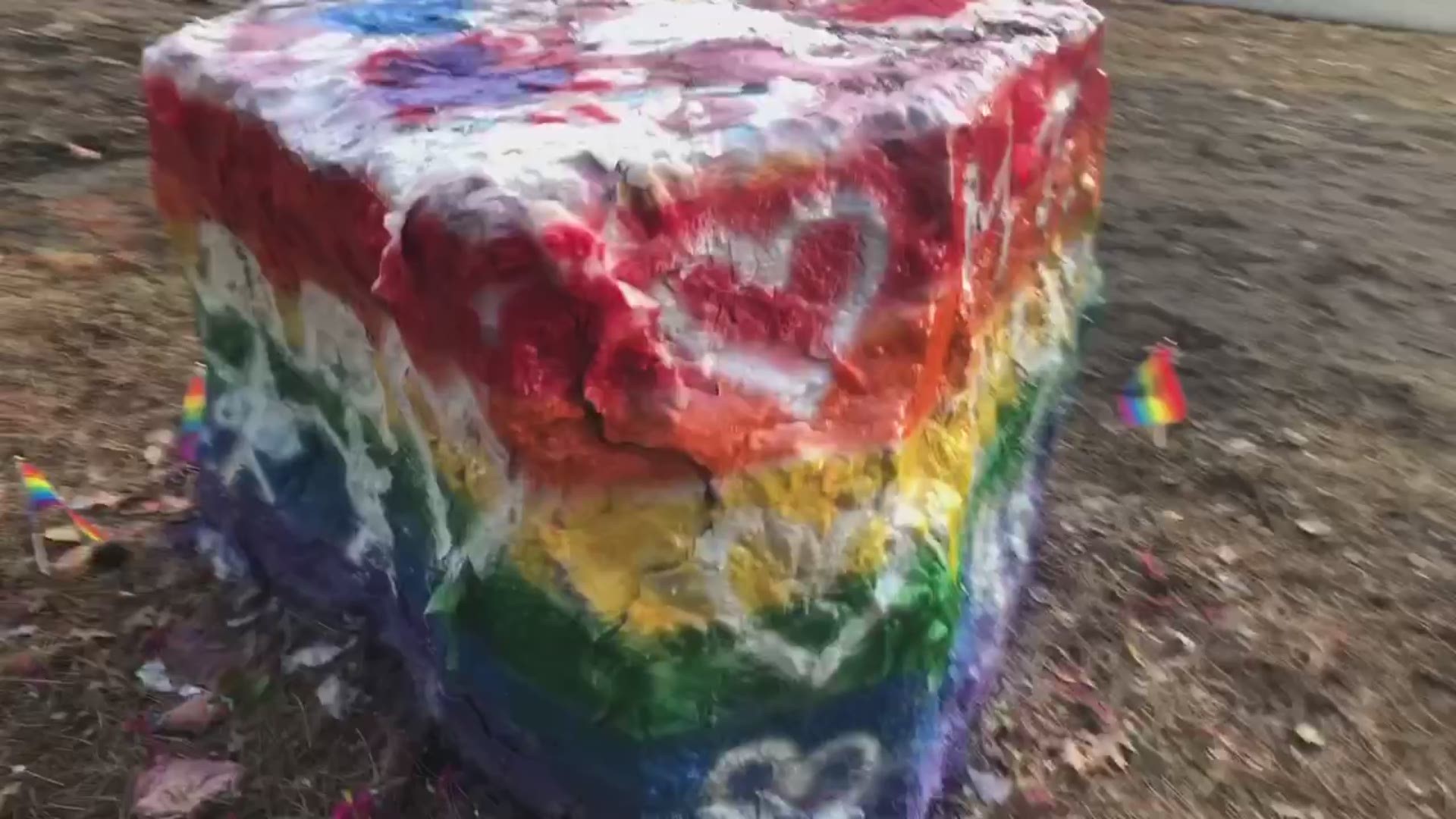 "I was contacted by a current student who was just sort of concerned, confused, asking for advice. And I felt that I  had a platform I could make an attempt to help in anyway I could. And it actually sort of sparked something big, which is amazing," McGoldrick said.

According to her, every year the school takes the eighth-grade class to Chicago around Thanksgiving time to watch a play. This year, the chaperones made the class leave The House Theatre of Chicago’s performance of The Nutcracker after learning the actors playing the main character's parents were portrayed as a gay couple, McGoldrick said.

A few hours after McGoldrick asked for the apology, the school posted a response on Twitter from Notre Dame Academy President Kim Grilliot saying, "We apologize for our decision for eighth-graders to leave a performance of The Nutcracker before it began due to casting choices. The mistake is contrary to our inclusive spirit and reminds us our actions should affirm that we are all God's children."

The school also posted the same apology on Facebook and in the comments section, the institution explained their version of what transpired on the trip:

"To clarify what happened, the decision was made for the NDA eighth-graders to leave a performance of The Nutcracker before it began because upon arrival they discovered that the producer had chosen to cast two men as the main character's parents. However, the spirit of inclusion statement adopted by the NDA Board of Trustees in 2014 affirms that we in the Notre Dame Academy community welcome all into our gospel community including but not limited to people of all colors, religions, ethnicities, sexual orientations, gender expression, abilities, economic classes and nationalities. We consider the decision to not attend the performance a mistake and sincerely apologize to anyone we offended. The action does not reflect NDA's true values. Rest assured we will redouble our efforts to live up to our inclusion statement.

Sometimes we teach our children as much from our mistakes as from our successes. We view this as a chance to teach our students the value of taking ownership of one's mistakes and to reaffirm that our community is committed to inclusion."

Ever since her post gained attention, McGoldrick received a lot of support online.

Facebook user Kelly Wingate posted a text Monday night saying she was "so incredibly proud of Carly McGoldrick for standing up for those too afraid to speak."

She went on to quote McGoldrick, who said two actors from the play reached out to her after her tweets gained attention in support of her initiative to call out the chaperones' decision.

"The amount of people speaking negatively about the situation has just been completely swamped by all of the positive reaction," McGoldrick said.

Equality Toledo issued a statement regarding the incident in Chicago. On Facebook, the advocacy group called the chaperones decision "upsetting to say the least," and that "actions like these are dangerous to LBGTQ+ teens who feel threatened and unwelcome."

The group also said they would be reaching out to NDA to offer LGBTQ+ education.

McGoldrick graduated from NDA in 2018 and said she was never exposed to anything remotely queer or having any kind of LGBTQ topic covered during her time there.

"I am so, so hopeful in this instance, seeing the response from the students and more recent alumni, girls that graduated a year after I did. It just makes me so, so hopeful because these are hundreds of people standing up against the actions of three, four, five people. Eventually something has to change and I think it will change and it begins by just having a conversation about it," she said.

The NDA director of marketing and enrollment management said that school officials will discuss what actions will be taken next.

"We believe we are called to love all of God's children. This is affirmed in our spirit of inclusion statement. Our inclusion committee will address the event, and make recommendations to a course of action to address it," Margaret Korfhage said.