One year later: Pain hasn't subsided for family of 3 killed on way to church

One year later, a family is still seeking answers and accountability a year after two generations were killed when they were caught in the middle of a police chase. 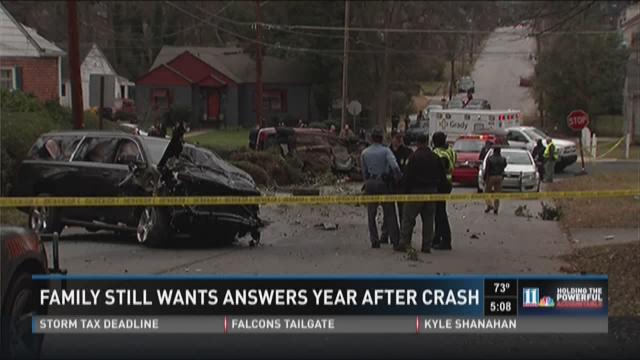 One year later, a family is still seeking answers and accountability a year after two generations were killed when they were caught in the middle of a police chase.

Dorothy Wright and her two grandchildren, 12-year-old Cameron Costner and 6-year-old Layla Partridge, were killed on Jan. 31, 2016 while on their way to church.

That morning, College Park police officers were chasing a man who stole a black Chevy Suburban from the Westin Hotel near the airport. The chase sped through a southwest Atlanta neighborhood when the crash happened at the intersection of Gordon and Rogers streets.

Police said they lost sight of the suspect's vehicle right before they came up on the crash.

The suspect ran away from the stolen suburban after the crash and has still not been captured. Georgia State Patrol investigated the crash and College Park Police, along with Crime Stoppers, offered a $10,000 reward for information that would lead to his capture. The only identifying information police provided was a sketch.

"I don't even know if anyone is still looking for this person that did all of this, so it is really, really tough," Joi Partridge.

Joi Partridge said that months have passed with no new information or communication from police.

"If anybody knows anything, please come forward," Partridge said.

The family and their lawyers have carried out private investigations and followed up on leads, but still don't know the identity of the suspect.

"We've exhausted nearly all the resources we know to be available," attorney Christopher Chestnut said. "We need more leads."

In August, the family filed a lawsuit against the department citing their own policy not to give chase unless the suspect had committed a violent felony. Lawyers for the family say that is not the case.

College Park police did not return 11Alive's request for comment on this story.

On Tuesday -- exactly one year after the tragedy -- the family created the Dorothy S. Wright Foundation to help funeral expenses and provide counseling for families dealing with similar incidents.

1 / 21
11Alive
Dorothy Smith Wright, 75, of Atlanta was behind the wheel of her car with her 12-year-old grandson Cameron Costner and 6-year-old Layla Partridge, both of Fayetteville, Ga., when a stolen Chevy Suburban crashed into them, killing all three.