He hid his art talent for 50 years. Now he's sharing it with the world as he fights brain cancer.

“I was ashamed and embarrassed," he said. “I would avoid showing my artwork to the public.” 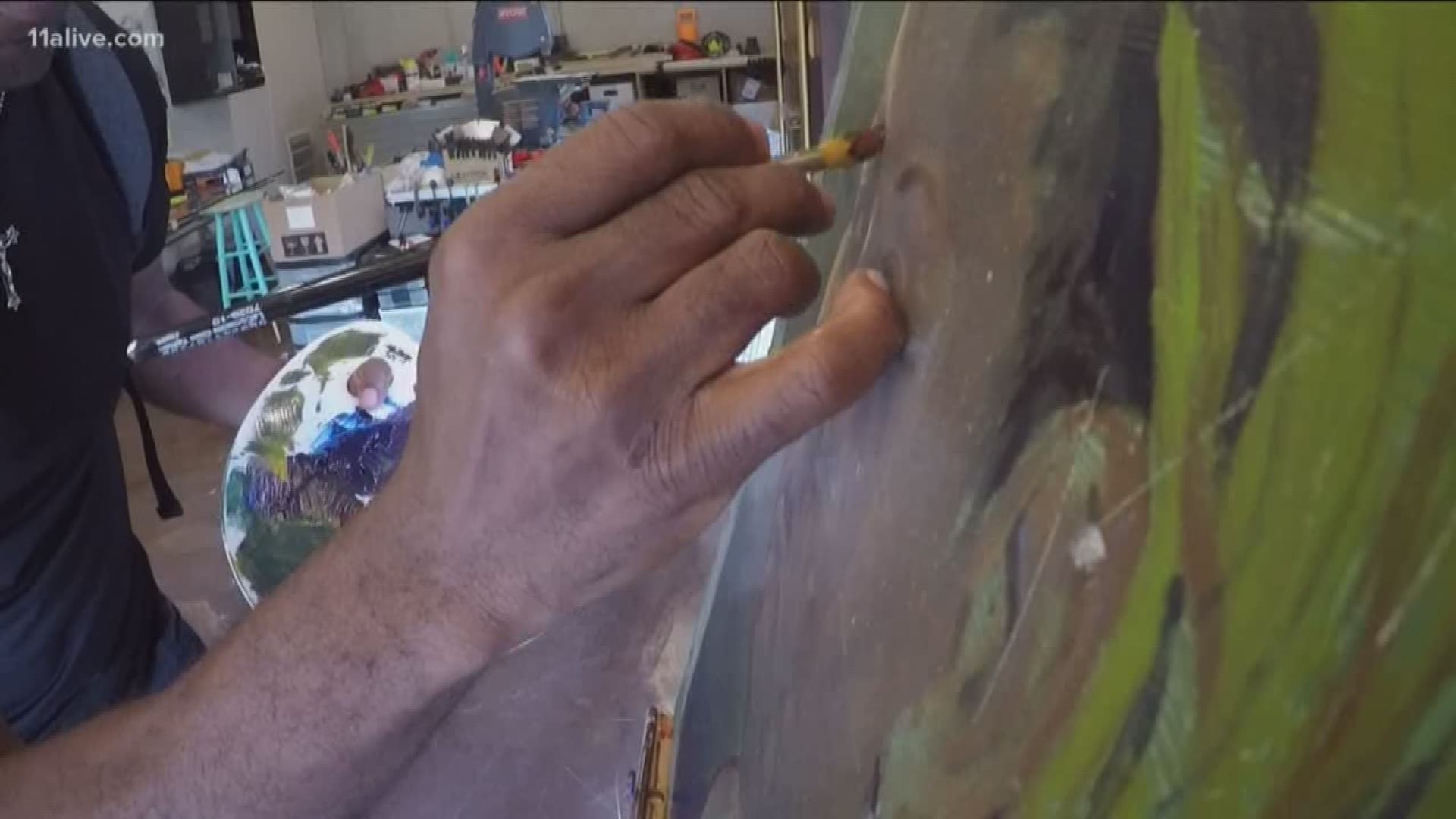 ATLANTA — Columbus Cook kept a secret for 50 years. He didn’t feel like he could openly share his talent, but for the first time, he's sharing his gift as an artist with the world.

It took him facing death to live fully.

“One of the things I’m most in love with about the art is being able to express myself," he said.

There are skills we practice in life, even master, but some talents are just given. People noticed Columbus Cook had an extraordinary gift by pre-school.

“I remember someone noticed it with me when I was 4,” he said. “I was able to draw and not draw like a kid.”

Someone told his family he was a savant, but he was made to feel it was a bad thing - that he was different from the other kids.

“I was ashamed and embarrassed," he said. “I would avoid showing my artwork to the public.”

He would always work behind closed doors in his house. Most people in his life had no idea the gift he had to create art. He went on to have a few different jobs and started a family. He has seven children.

He joined the military and served in Desert Storm. He is a Master Sergeant with the 116th Civil Engineering Squadron in Warner Robins, Georgia.

Eventually, he did illustrations for architects, creating some of Atlanta’s most recognizable places. Still, it wasn’t the kind of art he loved most.

Columbus Cook always thought that was something he might do late in his life.

“I figured I’d do it when I retired," he said. “It was always a thought that maybe I’d just do it later.

Then he found out, later was a luxury life would not offer him.

“When the brain cancer came up, it changed a lot of things," he said.

Someone at work was the first to notice some slight changes in Cook’s emails.

For a man who was so meticulous and detailed, something did not seem right in his communication. She told him he had to go check it out with the military doctor right away.  He was diagnosed with a form of brain cancer known as Glioblastoma multiforme, Stage 4.

It took a 6-hour brain surgery the next day to remove the tumor.

They had not seen this coming. In his early 50s, Columbus had seemed like the picture of health.

“At that point, he did not recognize me by name because the tumor was growing so rapidly. His wife, Val said.

There were two things still clear in his mind. His family and his art.

“He was disoriented but he had a complete moment of clarity,” she recalled. "He told me, ‘if I make it to the other side, I promise you I am going to do art.'"

He promised his wife he would finally do what he was put on this Earth to do. That meant no more hiding his gift and no more dreams deferred.

After surgery, Columbus had to learn to hold a pencil again, learn to write, and then to draw.

As he did, his wife noticed a dramatic difference.

“He started seeing the world in a different way," she said. “It was a real pivot point in his life, in all our lives.”

He shared his dream with a group of friends. They rallied and built an art studio in his unfinished basement. It is a place he finds peace and contentment.

“It has been about pursuing passion with everything in us," his wife said. "It’s been beautiful to see how his diagnosis has changed the way we see time and life.”

They are determined to make the most of every moment. The Cooks are grateful for the care they’ve received. Doctors at Emory Brain Health have him using an Optune device, which is a battery-operated device that sends signals into electrodes that cover Columbus’s head. He told 11Alive's Cheryl Preheim he wears it 18-hours-a-day.

“The best way to describe it is that it sends signals into his brain to confuse the cancer cells so they can’t multiply as quickly," Val said.

His prognosis isn’t good, but the device helps, buying him time.

Val said this journey has changed the way they both see the value of time.

“For everyone who is walking around taking it for granted that you’ll be here next year, you may not have it, she said. “Do it now.”

Art is a gift. Columbus Cook said cancer is too. It’s helped him see life differently.

“We both really started to look at the fact that life here on Earth is short whether you are 100, 50 or 30 years, it is still a short time.”

“What matters is how you spend that time," he added.

The Cooks hope people will hear their story and stop putting off their passions and dreams.

“This year has been not without its challenge," his wife said. "But beautifully surreal in that the person I love the most in the world now has space to create and finally live that vision he’s always had for his life.”

Columbus Cook said he will use his gift, openly, for as much time as he’s given.

His dream is to have a public art exhibit. He’s hoping someone will see this story and be inspired to help make that wish, come true.

Local stories of courage in the face of unimaginable obstacles

Amazing Grace Bunke passes away after brave battle against cancer