The discussion on climate change is happening across the country and in our state. Meet a few of the Georgians leading the charge. 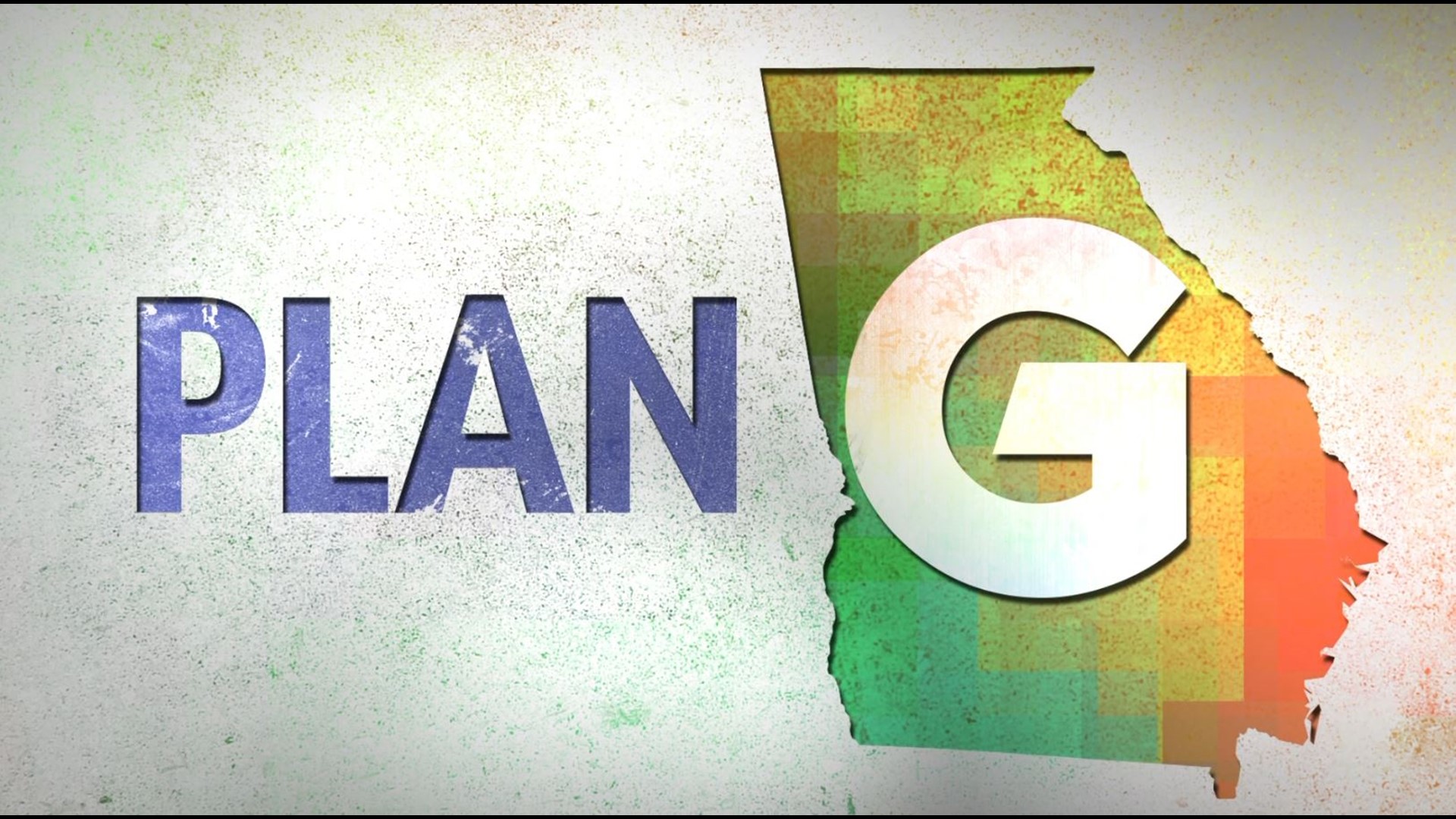 We’re all over the weather, but we generally avoid going beyond. Climate, as a subject, is deemed too toxic, too politicized, too daunting - too depressing.

It doesn’t have to be.

In Georgia, it’s solutions in unexpected places. It’s green business booming on brown soil. It’s challenges along the Atlantic coast and the Atlanta streets. Our new report, PLAN G, examines these ideas, using the stories of residents of Georgia who are uniquely affected by changing the climate.

During this report, you’ll meet a longtime Atlanta pastor who has become a leading voice in uniting the faith and science communities. You’ll meet a south Georgia farmer who grew peanuts and corn for years but recently sold a chunk of land to be used for solar. You’ll meet residents of Tybee Island, where officials on both sides are working together to protect the island against several major concerns. And you’ll meet the people behind an 18-mile stretch of I-85 that’s become a living laboratory for climate solutions.

These Georgians don’t all think the same way. They come from different backgrounds, bring different life experiences, and even hold different views on climate change. But they’re all part of how the climate is changing Georgia.

In 1963 a young man named Gerald Durley was among the hundreds of thousands who attended the March on Washington.

Nearly half a century later, Durley discovered what he believes to be the Civil Rights Movement of this era.

“At this stage of my life,” he told 11Alive’s Matt Pearl, “I thought I would join the rest of my friends in what they call retirement.”

Durley had served as pastor of Providence Missionary Baptist Church in southwest Atlanta for 25 years.

“I call it re-wire-ment. I’m taking all the things I learned in the Civil Rights Movement and the faith community and bringing them to bear in something that I think is so pressing today, the environment.”

► MORE ON THE REV | He marched on Washington in the 60s. Today he brings faith into the fight on climate change

In the past decade, Durley has become a leader in the faith community to provide awareness of climate change. He has written on the subject for numerous publications, including a 2013 piece for Huffington Post titled, “Why Climate Change is a Civil Rights Issue.”

He has spoken at countless venues, including the 2019 Climate Reality Workshop, an initiative run by former Vice President Al Gore that filled a Georgia World Congress Center auditorium with eager climate advocates.

“I mean, what did I know about a polar bear?” Durley said. “And what did I know about carbon dioxide and greenhouse gases? But when I saw how it negatively, disproportionately impacted African-Americans – those I was called to serve all my life – I said, ‘Someone has to articulate this.’”

Numerous reports and studies have been produced about this disproportionate impact, which was summarized in 2018’s Fourth National Climate Assessment, produced for Congress and the President by the U.S. Global Change Research Program.

A separate study from the American Council for an Energy-Efficient Economy (ACEEE) found that low-income, African-American, and Latino households spend up to three times as much of their income on energy as other, higher-income households. Atlanta had among the widest gaps.

Durley speaks to two communities that, he believes, don’t get associated enough with issues around the climate: minority communities and faith communities.

“When I first got into this, I would go to so many meetings impacting the minority communities. But I got tired of people talking about me rather than to and with me," he said. "People perish because of lack of knowledge. It’s important for me to let people in this community know that climate change is a part of your well-being.”

Steve Singletary has spent his life in Blakely, Ga. The town – and the massive amounts of farmland passed down through his family – has been good to him.

“Blakely’s an unusual small town,” Singletary said. “If you go on the street corner in Atlanta and holler about Blakely, somebody will answer you.”

It’s also a town synonymous with the crop found more in southwest Georgia than maybe any other corner of the country: peanuts.

“We’re the peanut capital,” he said as he drove by a sign that declared Blakely “PEANUT PROUD.”

Now, Blakely is known for a different kind of farming.

Earlier in 2019, Singletary sold 1,400 acres of his farmland to Silicon Ranch. They’re a solar provider. They plan to fill his former farmland with 355,000 panels.

► MORE ON THE FARM | For years he farmed peanuts on thousands of acres. then he sold land for solar

“People didn’t think we would ever do it,” he said. “But times change … so you change with it.”

The entire state has changed massively in the past 20 years in terms of its commitment to solar. According to the solar tracking map from Southface, Georgia held just two solar installations at the turn of century. By 2010, it held 300. And now? There are more than 2,000 spread across the state. Georgia once lagged behind in this area. But in 20188 it became a Top 10 state. Various projects have it staying that way over the next decade.

“It’s really a low-maintenance installation,” said Mike Perkins of Radiance Solar. The construction requires crews to put the panels in place, but, at that point, a solar farm requires far less care than a traditional farm.

“The big part of the story,” Singletary said, “is that the technology and the panels have gotten to the point that it generates enough electricity to make it a valuable enterprise. Ten years ago, they had [panels] and could generate electricity, but they couldn’t do it as cheaply as the others could.”

Now they can, which is why a solar provider could afford to outbid a traditional farmer for Singletary’s land. Singletary says climate change has “never been on my radar,” but he saw this decision in economic terms.

It’s an 18-mile stretch of I-85 that extends from LaGrange, Ga. to the Alabama border. Aside from a few small signs, it doesn’t advertise itself much along its stretch of the highway.

But on the margins, The Ray is a rolling test ground for green efforts.

Ray C. Anderson founded a carpeting company called Interface and was once called the “greenest CEO in America.” In 2012, around a year after Anderson passed away, his family re-launched the Ray C. Anderson Foundation to support initiatives that protect the planet like The Ray. Experiments and innovations dot the 18-mile stretch, from a solar-powered EV charging station – the first in the Southeast – to the first Wattway solar road pilot in the country.

Kelly said everything is scalable and available for other states and jurisdictions to use.

“A lot of what we’re doing on The Ray is not complicated,” she said. “What we’re doing is common sense. It’s low-hanging fruit. It’s motivating the little changes we can take right now, at scale, across the nation. If we have to be a solo act, for now, we’re running as fast as we can to do the most that we can.”

Their influence is slowly spreading. Kelly said The Ray has already inspired similar efforts in Colorado, Pennsylvania, and Florida. In June, she gave a tour to a lead asset manager from VicRoads – in Victoria, Australia.

“That’s the bar for The Ray,” Kelly said. “We will go anywhere if we have to, in order to inspire and give more people the tools to be safer and to change.”

Tybee Island is a regular destination for summer-vacationing Atlantans.

For Paul Wolff, it’s home – and has been for decades.

That beach – or more specifically the effects of being marshland surrounded by water – have begun to jeopardize the island’s future.

► MORE ON THE COAST | The more you raise a highway, the more it sinks: Tybee Island's climate change paradox

Five of Tybee Island’s highest ten tides have come in the last ten years. Two of them – the highest two – came from hurricanes: Matthew and Irma, nine months apart.

“We had storm surge from both Matthew and Irma that impacted people that had felt invulnerable for years," he said. "People who had never been impacted realized we are in fact vulnerable. We need to do something to become more resilient.”

Wolff was a longtime climate advocate while serving five terms on the Tybee Island City Council. He’s not on the council anymore, but he led the charge for many of the moves the city has made.

“When we did our climate change adaptation plan, the first thing we did was hold a town hall meeting where we said, ‘We’re not going to debate the causes of climate. We’re not going to worry about whether human activity is exacerbating it. Rather, we’re going to look at the things you see every day',” he said.

The island now holds dunes along its eastern border on the other side of which are the Atlantic Ocean and tide gates. This fall, the city will invest $18 million to connect the dunes into one tide-stopping force.

Efforts like these are taking place across Georgia. They are minuscule compared to the effects they counter, but advocates hope they add up.