A year ago, she woke up, started making cinnamon rolls ahead of a storm and never returned

Mitzy Moye says she hasn't been home since Hurricane Michael. 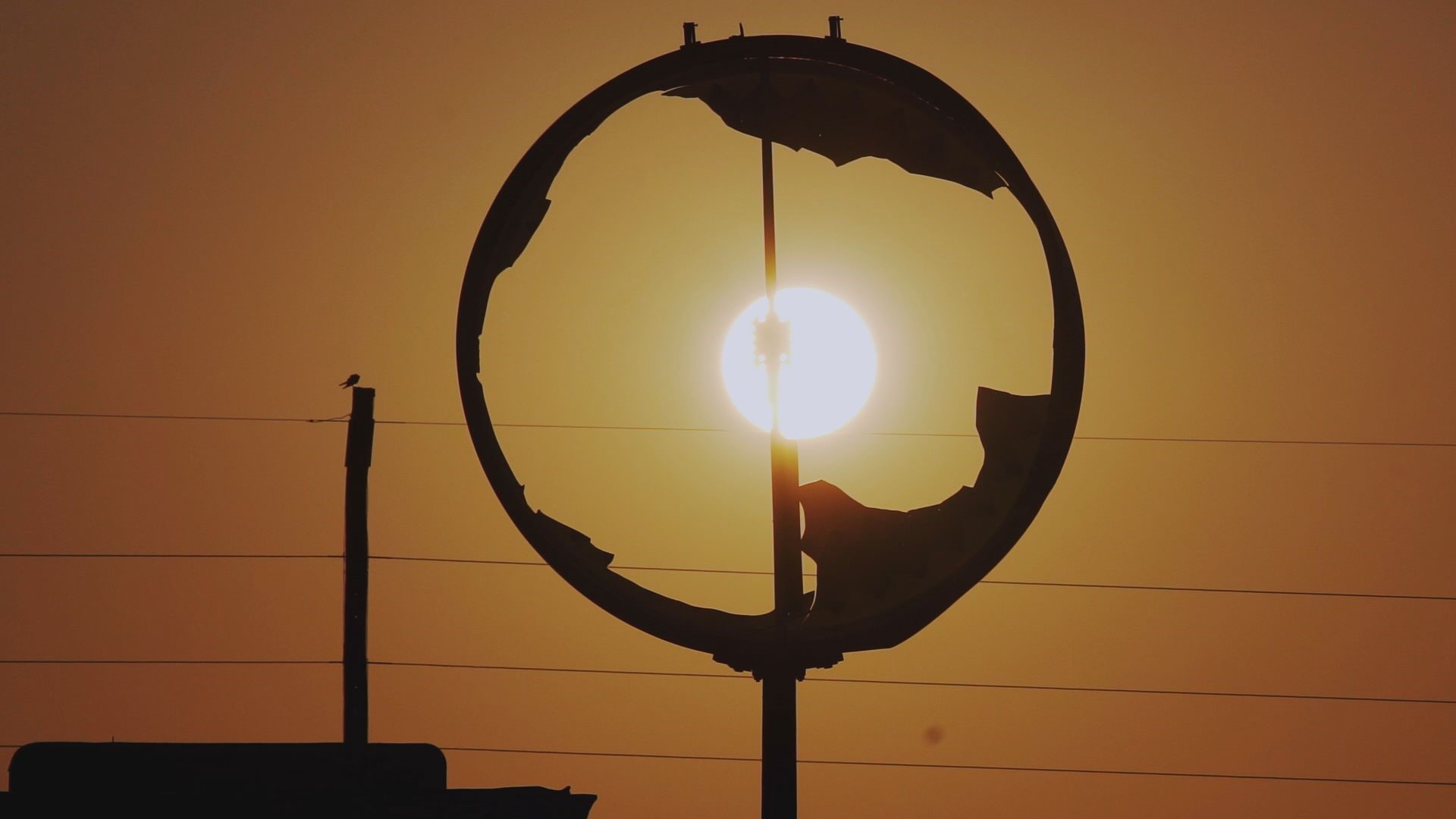 DONALSONVILLE, Ga. — It’s a question that, in the past, might not have meant much.

What do you think people think when they think about Donalsonville?

When asked, residents of Georgia’s southernmost city rarely hold back.

“A lot of times south Georgia’s been forgotten,” added Ronny Shindler, a hay farmer who lives in Early County, but prays at a church in downtown Donalsonville. “We’re kind of the ugly cousin.”

“When people finish school, they leave because there’s nothing here to do,” said Gwen Williams, a decades-long resident. She then chuckles and adds, “But I’d rather be home than in the big city.”

These days, those responses tend to include an extra perspective – insight earned in a year of enduring the worst storm in memory to hit Donalsonville’s streets.

Hurricane Michael left an immense amount of damage to homes, streets and businesses across south Georgia, particularly its southernmost city.

“A lot of the bigger organizations have done tremendous work,” said resident Billy Williams. “But they’ve come and gone.”

“A year later, people feel like we’re fine,” said Council member Mitzy Moye. “We’ve overcome a storm. But what does that mean exactly?”

The following are portraits of how recovery looks a year later. So many in this city of 2,500 – and in its surrounding cities and counties – find themselves feeling effects they hadn’t expected.

One year after Hurricane Michael, we reflect on the devastation it caused

Mitzy Moye says she woke up on Oct. 10 last year, pressed out some cinnamon rolls, and put on a big pot of chili. A storm was coming, and she figured she'd ride it out with her daughters and then make dinner.

She hasn't been home since.

One year since Hurricane Michael, Councilwoman Moye and her husband have lived out of an RV, and then, a Donalsonville Days Inn. She's also a city decision-maker, answering questions from residents about why recovery has taken so long.

"I can help them within the city," Moye explained. "But I can't put them back in their house."

Moye originally figured the city would get everything clean by the end of 2018. Now, she's frustrated with state and federal agencies that, she feels, haven't provided the necessary relief.

"You have FEMA come and promise all these things," she said, "and maybe a handful of people got something ... but nothing like what they had."

More than 35,000 Georgians made valid registrations with FEMA after Hurricane Michael. Fewer than 5,200 were approved.

"The system failed a lot of people."

RELATED: I spent a week covering the aftermath of Hurricane Michael. Here's how I coped.

“Recovery hasn’t done anything for us,” Williams explained.

She said she applied for aid with FEMA but was denied.

When she walks around her house, she spots nails coming up from the tin – which, she says, flaps nonstop during especially windy moments.

“We still have to pour out buckets of water ... I never had to do that before, but now I have to do that every time it rains," Williams said.

And when she looks next door, she sees blue tarp covering the home of her sister, who hasn’t been able to move back.

“They say by the next five years, we might be back where we were,” Williams said. “Five years? We might not be here in five years.”

That timeline has become a common refrain for many south Georgians, who admit they expected recovery to take maybe a few months.

While Williams laments the state of her roof, she still gets the most of her freezers. She uses 15 of them to store food that she grows, makes, and purchases for anyone who needs.

On this day, she unfolds a giant roll of tarp to reveal Triscuits, split peas, cans of beans, and various plates she plans to deliver later.

“I’ve been doing it all my life,” Williams explained. “When you do something all your life, you continue to do it.”

She then declares an identity that has become increasingly important since Michael.

WATCH | Repair and rebuild - One year after Hurricane Michael Special Sunday at 6 p.m.

On a scorching Wednesday afternoon, Wendy Turney and Marilyn Mason drive the streets of the city they’ve covered many times in the last 12 months.

“We’ll go to people’s homes and businesses and try to catch people where they’re at,” Turney said.

Turney and Mason are team leads for the Georgia Recovery Project, a federal grant program that has supplied south Georgia with crisis counselors who canvas a spread-out region for people in need.

“A lot of times, we hear we’re the first people that have come to check on them since the storm," Turney said. "I think it helps, in that people feel valued.”

On this Wednesday, Turney and Mason meet Kimberly Powell - a resident of neighboring Iron City - whose home is battered but still upright. Within minutes, Powell reveals stresses that have endured beyond the storm. She laments electric bills that have skyrocketed since Michael, and she describes increased strain on her marriage and general state of mind.

“Every storm that comes by, you have post-traumatic stress,” Powell said. “It’s just terrifying to think of another hurricane, because our house would be gone.”

As for the response from beyond the area: "We don't feel supported. We feel like we've kind of been abandoned."

It’s a familiar story for the team leads who hand Powell a page of possible resources.

“It’s disheartening,” Mason explained. “They just feel like they’re at their wit’s end.”

Ronny Shingler lives off the edges of Donalsonville, on the border of Seminole and Early counties. He drives south Georgia often – to his farm and neighboring farms that need occasional assistance.

On this drive, he admits the strain of this region’s most devastating storm.

“It’s somewhat depressing to look at the destruction every day when you know what it used to be like,” Shingler said.

“It was beautiful. It was like a big, beautiful garden," Shingler described. "Now it looks like a bomb went off in some places.”

Shingler drives past downed trees and torn-up terrain. Then he returns to his farm, where reminders of Michael spread across the land. He rips a bale of molded hay and shows a storage facility with painted red lines that indicate leaks.

Why hasn’t he fixed it? Because he’s waiting on insurance.

Shingler’s lawyer sent a letter to his insurer demanding payment. His son Billy is an attorney who says he has fielded multiple claims from residents who said they got ripped off by contractors. For many in south Georgia, recovery remain paused until lawyers and insurance companies make decisions.

“If your premiums are due, and you don’t pay them, they cancel you in 30 days,” Shingler said. “Now, here we are, eleven months later, and valid claims haven’t been addressed.”

What does that say to Shingler?

“They don’t care. It’s simpler to fight somebody than to pay him.”

Renea Pierce believes she works in the rare place not still reeling from the effects of Hurricane Michael.

But it took a while.

Pierce is the principal of Seminole County Elementary School, which suffered millions in damages from the storm. The back side of the school was torn up, as was the scoreboard of the football field and numerous areas around the campus.

Students didn’t return for weeks, and many shared space as classrooms and hallways underwent repairs. The school brought in extra counselors to deal with any emotional and mental strain on the children.

But since the start of the new school year, Pierce says the counselors haven’t fielded additional calls.

“Our kids sometimes have a tendency to be more resilient,” Pierce said. “They don’t have the cognizance or maturity to recognize the total impact it’s having. They’re in the here-and-now. They’re in today.”

As the one-year mark of Hurricane Michael approached, Pierce awaited the final piece of recovery: two bathrooms in a renovated wing. She plans to host an open house once everything is open.

“It seems like everything is back to normal ... or they have adjusted to create a new normal," Pierce explained.

The idea of a new normal doesn’t sit well with Billy Williams.

He stands across from a house on Martin Luther King Jr. Drive with a tarp flapping from its roof.

“A lot of these folks did not have insurance,” Williams said. “Resources are limited. And they need to find some hope moving forward.”

That’s why Williams teamed with community and faith leaders to create the Blue Tarp Project, aimed at removing every tarp in Seminole and the surrounding counties. As he watches, a crew chips off the slats and prepares to install a new roof, a process that Williams says takes 4 to 5 hours. This is the fourth house on the list.

The Blue Tarp Project is led by residents, spurred by an anonymous donation that provided initial seed money.

“We have fifteen to twenty percent of the homes in this area still with tarps on them,” Williams said. “It’s a call to get busy and realize that your fellow man needs help.”

It's a message he hopes spreads beyond Donalsonville, to those who may never have thought much of Georgia's southernmost city.

For years he farmed peanuts on thousands of acres. Then he sold land for solar