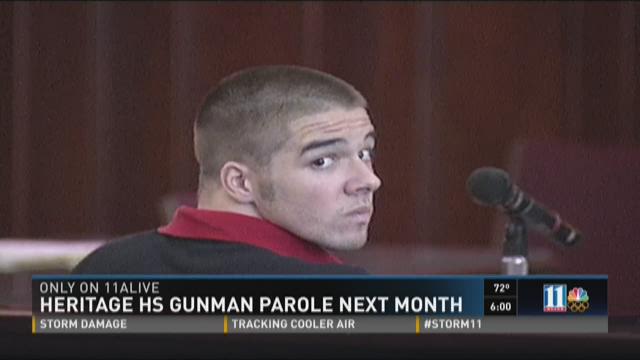 CONYERS, GA-- The state parole board is planning for the release of a gunman who shot six students at a Rockdale County high school 17 years ago. It happened one month after the massacre at Columbine High School in Colorado – the first of many such copycat crimes.

The gunman is TJ Solomon, who is already in a transition facility, pending release.

TJ Solomon was a 15-year-old student at Heritage High School when he walked into his school with a .22 calibre rifle and opened fire. The country was still reeling from Columbine, where two students had murdered 13 people and injured 21 more.

Classes hadn’t yet begun when Solomon fired the shots that wounded six of his classmates, one of them critically. Nobody died. Witnesses said Solomon appeared to aim low – then collapsed in tears when a school official subdued him.

Solomon pleaded guilty but mentally ill to aggravated assault. A judge sentenced him to serve 20 years – a sentence prosecutors deemed too light.

"We were aware through writings and documents we recovered at TJ’s home that he was focused on Columbine. He had been focused on Kliebold and Harris, the killers in that case," said Rockdale Co. District Attorney Richard Read, who prosecuted Solomon. "And I wanted to send a message that that kind of behavior is not going to be tolerated." Read recommended a sixty year sentence.

After serving 17 years of his 20 year sentence, the Department of Corrections has moved Solomon from a state prison to a transitional center in Clayton County.

The Board of Pardons and Paroles says Solomon has a “tentative parole month” of May 2016, subject to a “final review of the inmate's case file,” according to spokesman Steve Hayes. After that, Hayes said the board could ratify the release, change the date or reverse its decision.

The pending release caught Read off guard. Read told 11Alive News that he believes Solomon should serve every day of his twenty year sentence, based on the gravity of the crime. The DA acknowledges he is unaware of the extent to which Solomon has turned around his life while in prison.

"But even with that lack of understanding, the sentencing posed in this case was twenty years to serve. My belief is he should serve twenty years. Then at that point in time, the transition should begin," Read said.

Hayes says the parole board will set a release date, if appropriate, after it reviews Solomon's file.