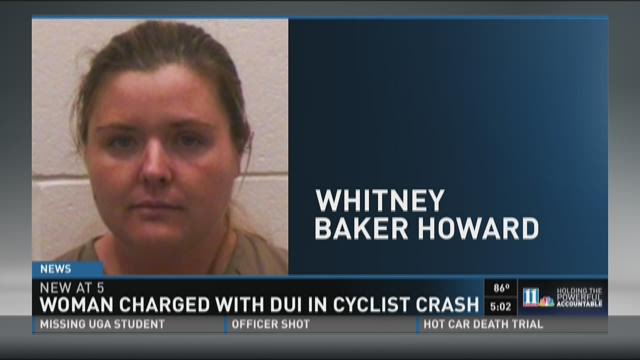 One bicyclist is dead while another suffered serious injuries after a driver under the influence of drugs slammed into them near Athens, police said.

According to the police report, Whitney Baker Howard was driving westbound on Athena Drive, near the intersection of Anderson Lane when she crossed the center lane and struck three cyclists, Ashley Block, Mitchell Eric Enfinger and Brian Molloy, who were traveling eastbound.

MORE | Photos from the scene

Block was pronounced dead at the scene. Police believe she was struck by Howard's vehicle head-on. Enfinger suffered serious injuries after being struck on the left side and ejected to the shoulder of the roadway. Molloy was struck by the vehicle's mirror, only suffering injuries to his left arm.

UGA released a statement Tuesday afternoon: "The University of Georgia community is deeply saddened by the tragic death of graduate student Ashley Elizabeth Block. The UGA family extends its most sincere sympathy, thoughts and prayers to her family in this time of need."

Howard was arrested and charged with First degree Homicide by Vehicle, Serious Injury by Vehicle, Driving Under the Influence of Drugs, DUI Endangerment, Failure to Maintain a Lane and Distracted Driving.

Police said Howard's toddler-age child was in the back seat of her vehicle when the accident happened.

According to municipal court documents, there was a pending DUI charge against Howard from June.

Molloy is the owner of The Hub Bicycles. He escaped the crash without major injuries. Cyclists dropped off flowers outside the store on Tuesday as a show of support.