A rally is set for Friday afternoon outside Atlanta’s Israeli consulate that will call on Mayor Kasim Reed to stop sending Atlanta police to the Middle East. 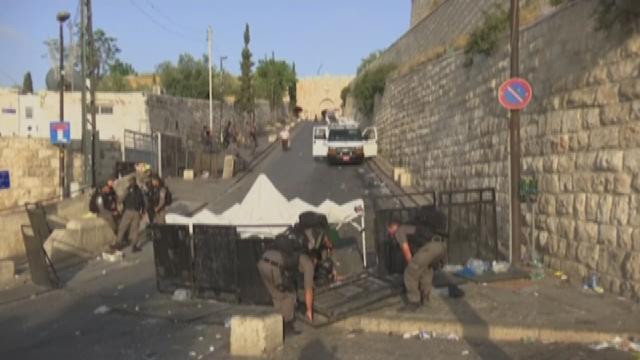 A rally is set for Friday afternoon outside Atlanta’s Israeli consulate that will call on Mayor Kasim Reed to stop sending Atlanta police to the Middle East.

According to USA Today, authorities in Jerusalem were on high alert as Israel banned men under the age of 50 from the shrine that usually draws tens of thousands of Muslim worshipers for Friday prayers.

Israeli Police spokesman Micky Rosenfeld said the ban was introduced after some Palestinians barricaded themselves inside the Al-Aqsa Mosque at the holy site -- which is known as the Noble Sanctuary to Muslims and the Temple Mount to Jews -- overnight so they could join protests later. Rosenfeld said the would-be protesters were removed.

Clashes erupted Thursday between police and Muslim worshipers shortly after the site in the Old City reopened following an 11-day prayer boycott over metal detectors and other security measures Israel installed at the site, which is administered by Jordan.

Israel placed the metal detectors at the entry gates to the Esplanade of the Mosques last week after Arab-Israeli gunmen killed two Israeli police guards near the shrine on July 14. The detectors sparked mass prayer protests by Muslims outside the Old City and protests by Palestinians elsewhere.

"When we saw Israeli soldiers targeting Palestinian demonstrators with gunfire, tear gas, batons, and attack dogs, the violence reminded us of the oppression that African-American demonstrators experienced during the Civil Rights Movement," organizers said in a statement. "The United States should not fund such injustice with taxpayer dollars, nor should Atlanta's police department receive training in these tactics."

The City of Atlanta sends Atlanta Police Department officers overseas to Israel to receive training as part of the GILEE program. Local activists, including Black Lives Matter Atlanta, have previously objected to this program.

"The city of Atlanta should no longer send its police officers to the Middle East for training from foreign nations that engage in brutality," organizers said. "Atlanta law enforcement must learn how to protect and serve our city, not how to occupy and oppress it. Tanks, rubber bullets, tear gas, and attack dogs have no place on the streets of Atlanta."

The rally is set for 6 pm outside the Israeli consulate on Spring Street.