Athens Police use of 'chemical irritants' to disperse protest crowd 'reasonable' and within policy: Internal investigation

The announcement was made during a press conference held by the Athens-Clarke County Police Department, on Friday. 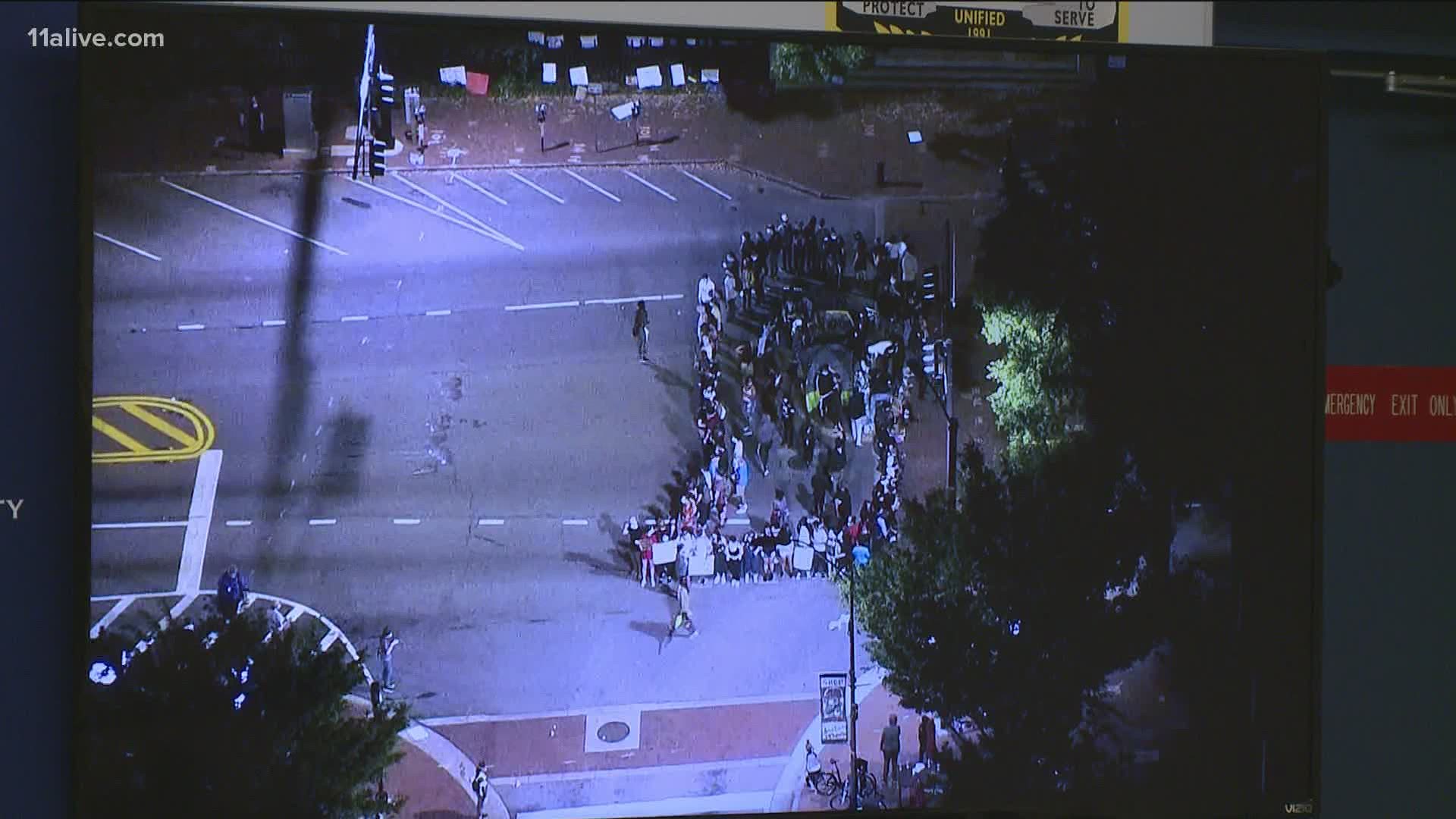 ATHENS, Ga. — The Athens-Clarke County Police Department announced that officers' use of "chemical irritants" and "impact emissions" to disperse a protest crowd during demonstrations downtown in May were "reasonable" and within the department's use of force policies.

The announcement was made during a press conference held by the department on Friday, during which the findings of their review were released. The department also released video footage of the incident.

The incident was connected to protests that took place in Athens on May 31 - the same weekend that massive - and at times violent - protests erupted in Atlanta following the death of George Floyd, the man seen pleading for air as a Minneapolis police officer knelt on his neck while he was handcuffed on the ground. Those protests, which cooled over subsequent days, gave way to weeks of largely peaceful demonstrations in communities across the metro area - and the nation.

Lt. Harrison Daniel, commander of the department's Office of Professional Standards, which is responsible for oversight and management of employee conduct, broke down the details of what happened.

According to Daniel, officers were aware of the protests that had been planned for Sunday, May 31 near the intersection of College Avenue and East Broad Street. He said that police were there during the day to support the crowd's right to protest.

Among the threats, he said, was possible targeting of government buildings and local gun stores.

Daniel said they also received information about possible "extremist groups and agitators" that would show up at the protest, which he said happened at around 7 p.m., when an "armed group of self-identified Boogaloos" arrived.

Daniel said the group began mingling with protesters from the larger demonstration and began "agitating the crowd," prompting many of those present to leave.

He said because of their presence - and the presence of other "agitators" - it "elevated the threat assessment" for possible impending trouble.

Around 9 p.m., Daniel said a smaller group of people were still gathered at College and East Broad, many of whom he said were dressed with full-face coverings, eye protection, rain jackets, heavy gloves and weighted down backpacks. He said they were also carrying a tent, a leaf blower and gallons of milk, "suggesting we have people who are potential agitators."

"The investigation found this was consistent with protest in other cities that had seen violence," Daniel said, explaining that it was "reasonable" to draw the conclusion that there was a public safety need to disperse the crowd.

Shortly after, Daniel said a curfew was issued for Athens around 9 p.m., but police did not move to enforce it for several hours. Instead, he said city officials posted notices on social media and websites, broadcast the curfew through Nixle alerts and relayed it via officers on ground - the message: that the crowd was now unlawfully assembled.

Daniel said shortly before midnight, police again broadcast a message to warn the crowd they were violating the law and force may be used and repeated it nearly a dozen times.

He said instead of dispersing, those who chose to remain assembled in a box formation and "tightened their ranks." Daniels said that led police to the decision that chemical irritants were the best course of action to disperse the crowd.

Daniel said police first used three canisters of plain smoke on College Avenue to show the department was serious about clearing out the intersection, allowing protesters extra time to leave. Video from body camera and street cameras played by Daniel, showed some of the protesters moving toward officers and the smoke, shooting off fireworks and throwing objects.

Daniel said the "totality" of the evidence - the reported threats, the "agitators" dressed in full gear, the violation of the curfew - showed that the "perceived threat" was reasonable and therefore, the department had the legal authority to disperse the crowd. He added that the chemical irritants was the best choice to do so, because a more hands-on approach that would have brought officers in closer proximity to the crowd could have escalated the situation to a physical level that could have ended with injuries.

Daniel explained that an internal investigation was opened shortly after, following the policy that requires one any time an officer has to use force, even without suspicion of wrongdoing. He said while the officers' actions were all within the department's guidelines, Daniel said the investigation did identify shortfalls:

1. Officers did not have adequate training in responding to incidents of "mass civil unrest." In such situations, they would have had to rely on state resources. The investigation recommended continued funding for a mobile field force to respond effectively to unrest.

2. While police initially had a line of communication with organizers during the day, Daniel said there was a failure "to establish viable communication with individuals who remained beyond events of the day." The investigation suggested police establish operational standards to remain in contact with protest organizers.

3. There was inadequate case development, which included the documentation and collection of evidence. The investigation recommended improving that in response to civil unrest.

Overall, Daniel said 18 arrests were made in the downtown area, with 13 additional people arrested for their alleged involvement in burglarizing local stores.