Here's a recap for the day. 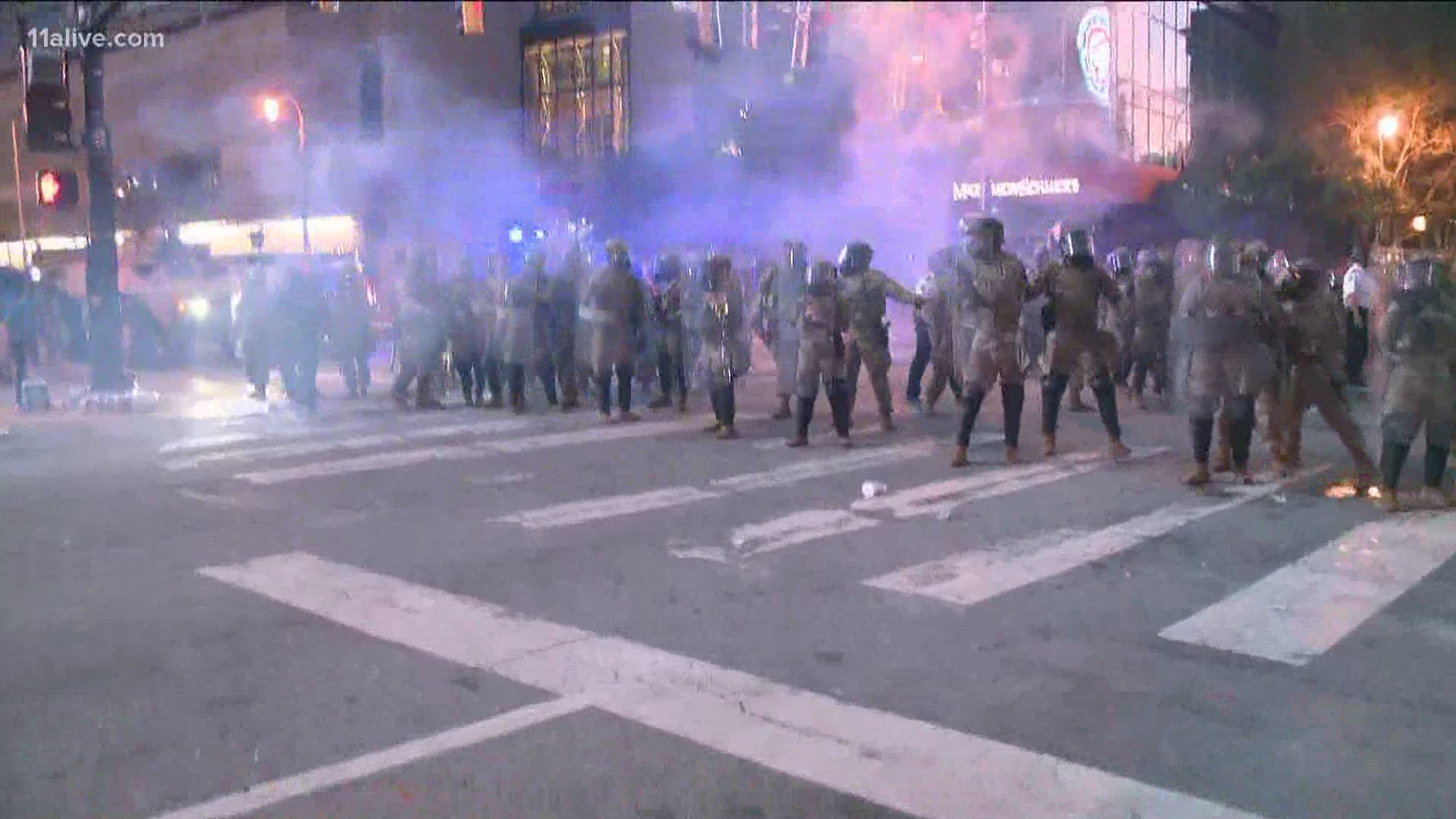 ATLANTA — Atlanta is seeing its fifth straight night of demonstrations against police brutality in America.

The protests in the city, which began Friday night, were sparked by the death of George Floyd in Minnesota - who died after a police officer knelt on the Floyd's neck for several minutes - the latest in a string of black American's deaths at the hands of law enforcement.

After weekend protests that started peacefully gave way to looting and vandalism, Atlanta Mayor Keisha Lance Bottoms imposed a 9 p.m. curfew for the city and Gov. Kemp called in the Georgia National Guard to help curb the violence that erupted on the first two nights of protests.

11Alive is following major developments. Scroll below for the updates from the day:

9:53 p.m. - 11Alive's Hope Ford discovered a memorial of 16 white crosses with flowers, bearing the names of black Americans who died at the hands of police.

9:02: p.m.  - Just seconds after the curfew, law enforcement used tear gas to try to break up the crowd.

8:49 p.m. - Law enforcement begins to move to clear the crowd, as fireworks burst.

Atlanta Councilman Antonio Brown @AtlDistrict3 telling crowd to go home before curfew. Said he is working with @KeishaBottoms to lift curfews moving forward but he needs crowd to work with him. #11Alive pic.twitter.com/coLq82mAfq

8:32 p.m. - 11Alive's Chenue Her reports an increased military presence near the epicenter of demonstrations.

8:24 p.m. - Hundreds of protesters dropped to their knee for almost a minute of silence.

This moment. Hundreds of protestors dropped to a knee for almost a minute of silence. #11alive #AtlantaProtest pic.twitter.com/unA36qsq59

8:12 p.m. - A flyover leaves a heart above the protest at Centennial Olympic Park

A flyover leads to a heart above the protest at Centennial Olympic Park. #11Alive pic.twitter.com/rvVUZigHxz

7:55 p.m. - 11Alive's Hope Ford reports the crowd gathered near Centennial Olympic Park says the crowd is continuing to grow, as a demonstration from the Georgia Capitol joins with them.

Witnesses said that there was tear gas used at the Capitol not too long ago.

And the crowd continues to grow a many people joining in from the GA Capitol- where witnesses say tear gas was deployed not long ago. Right now, it’s a lot of chanting, singing, and dancing from the crowd as they continue on Day 5 of #AtlantaProtests #11alive pic.twitter.com/8vdBNzSTfy

7:24 p.m. - A group of demonstrators that had been marching merges into a group outside of Centennial Olympic Park.

Two groups merged together at Centennial Olympic Park. One of the largest crowds I’ve seen since the weekend. It’s Day 5 of #AtlantaProtests but a lot of people I’ve talked to say today is their first time coming down #11Alive pic.twitter.com/0FaTvKrdXa

6:33 p.m. - A group of law enforcement officers in their riot gear is heading out to the protests.

We spotted this group of law enforcement officers in their riot gear heading out to the protests today. #11Alive pic.twitter.com/7f2P0rpamZ

6:10 p.m. - State troopers are blocking the entrances and exits to the Interstate to keep protesters from entering in.

State Troopers have the interstate entrance/exit blocked off so protesters can’t get on the interstate. For the most part, crowds have dispersed. Some are still standing here, talking to law enforcement. #11Alive pic.twitter.com/ExQFkPhXU4

5:58 p.m. - Protesters are marching along the BeltLine chanting, "no justice, no peace."

Peaceful protestors on the beltline in #Atlanta chanting “no justice, no peace.” @11AliveNews #AtlantaProtest #11Alive pic.twitter.com/qs9ykgz44D

5:35 p.m. - Georgia National Guard pose with protesters during the fifth night of demonstrations in Atlanta.

5:27 p.m. - The protest march is on the move, heading away from Centennial Olympic Park, according to 11Alive's Chenue Her.

5:22 p.m. - Demonstrators are calling on others to register to vote.

This woman is asking people to register to vote. #11Alive pic.twitter.com/8JIHnkkwXA

4:45 p.m. - State officials said they are working to make sure that they make testing available to protesters and the first responders working them, as they expressed real concern about a possible spike in COVID-19 cases.

"I think the situation is no different than any other situation that we had talked about," said Dr. Kathleen Toomey with the Georgia Department of Public Health. "When you have this many people gathered together in close proximity, you run the risk of viral transmission."

4:35 p.m. - During a briefing for the COVID-19 pandemic in Georgia, Gov. Kemp opened by addressing the current protests.

"Georgians are filled with fear, anger and righteous impatience," he said while he encouraged them to stay peaceful.

4:21 p.m. - Demonstrators are back in the area of Centennial Olympic Park for the fifth day in the row of protests.

4:12 p.m. - MARTA said that all bus, rail and paratransit services will operate as scheduled tonight.

MARTA added that it is working closely with the Atlanta Police Department and City of Atlanta and will adjust service to include bus reroutes or rail station closures if necessary for public safety. Streetcar services have been suspended for the evening due to protests at Centennial Olympic Park.

2:22 p.m. - The City of Atlanta has once again activated a 9 p.m. curfew to curtail potential looting or other negative actions during the overnight period.

The police department tweeted earlier this morning that they were aware of the demonstration and that the department "absolutely supports and encourages peaceful assemblies."

The added that they spoke to the organizers and hoped it will be "one of many peaceful events that helps bring our communities together."