Here's how things are developing in Atlanta after the announcement this afternoon. 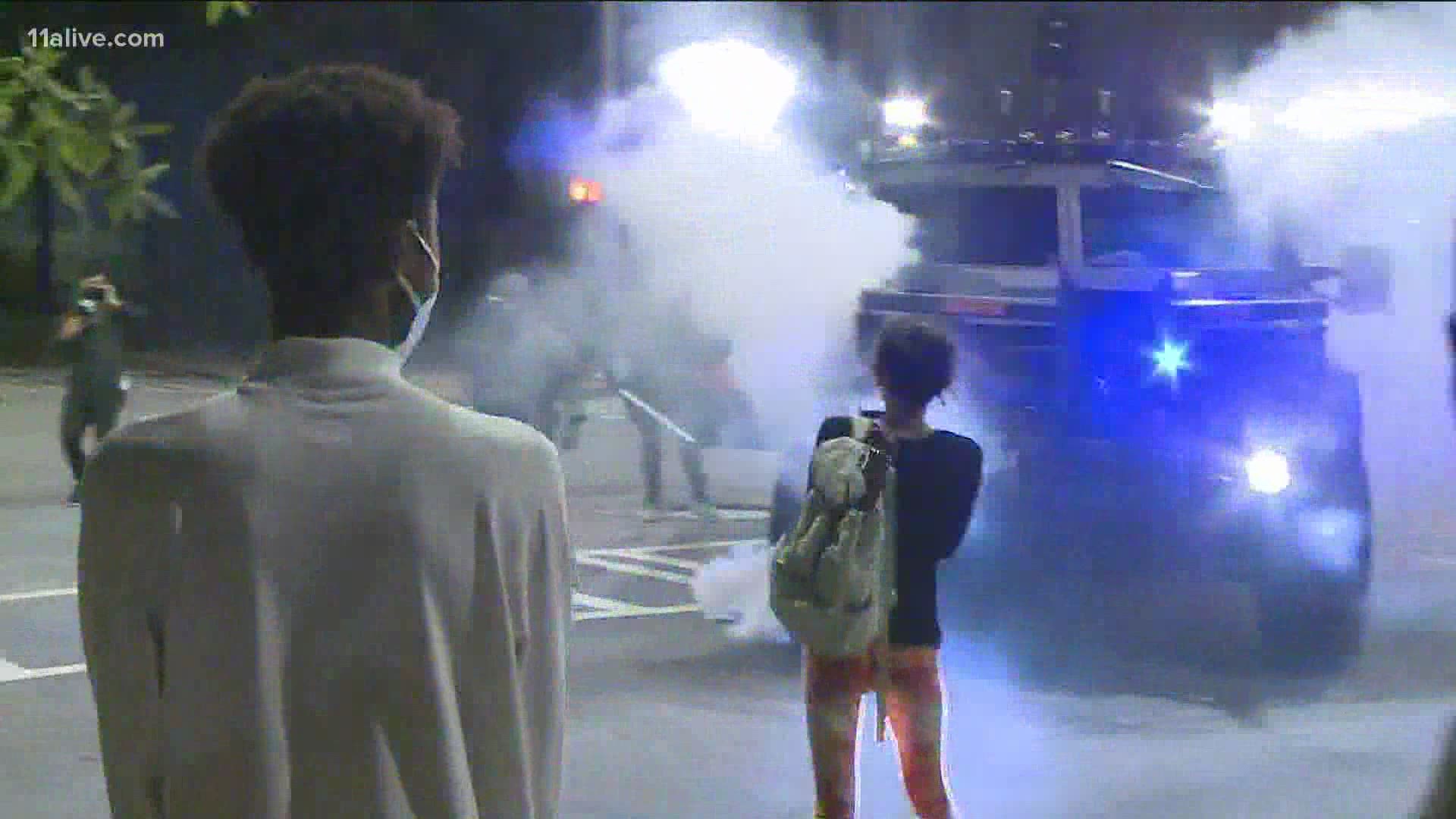 ATLANTA — Protests happened in Atlanta, following the announcement in Louisville, Ky. that one officer would be charged in the Breonna Taylor case, for shooting into a neighboring apartment.

Activists expressed disbelief after the announcement that there would be no charges for any officers directly related to Taylor's death.

The 26-year-old was shot and killed in her home by Louisville Metro Police Department officers in March, as the officers were executing a warrant at Taylor's apartment as part of a drug investigation.

Taylor did not have a criminal background. Attorneys said no drugs and no cash were found in her apartment the night of her death. Her family filed a lawsuit against the officers involved in the shooting on April 27. On September 15, the city of Louisville announced a $12 million settlement with Taylor's family -- the largest sum paid by the city for a police misconduct case.

RELATED: Charges in Breonna Taylor's death are for her neighbors

"We can confirm there have been a number of arrest made and will be able to provide a final tally for you tomorrow."

11 p.m.: 11Alive's Chenue Her gives a recap about a protest that happened earlier in the day at Johnson Park. Watch it below.

10:48 p.m.: 11Alive's Hope Ford spots a sign that says "Stop Killing Blacks".  Breonna Taylor's name and the names of other Blacks killed are listed on the sign.

There’s still some people outside the Capitol. Not as many. Some watching, some talking to State Police. Some walking around. But this is also what was left behind by protestors after hours of marches, chanting. #11alive pic.twitter.com/2aArJVsH7p

10:23 p.m.: It appears that some people are being taken into custody outside the State Capitol in Atlanta. 11Alive's Hop Ford saw some people tackled to the ground.

Several people getting arrested outside the Atlanta Capitol. Police and Guard blocked protestors in on both sides, funneling the direction people could get to. Saw at least three people tackled to the ground. #11alive pic.twitter.com/tr5cuSDO2g

10:10 p.m.: 11Alive's Hope Ford gives an update from the area where protesters are gathered by the Georgia Capitol. Watch it below.

9:51 p.m.: Tear gas has been deployed into the crowd as they return to the State Capitol.

Correction. This is not the Guard. It’s Georgia State Patrol. #11alive https://t.co/mC7M3xDtjW

8:56 p.m.: 11Alive's Hope Ford said something was fired into the crowd. A woman was helped by medics after she fell.

Something was fired into the crowd. A young woman tripped and fell, medics helping her. People said they tasted a peppery taste after whatever was fired. #11alive pic.twitter.com/DXbv1KzZkJ

8:49 p.m.:  The group has reached the Georgia State Capitol.

The group marched to the Capitol. Many chanting “the people United, will never be divided.” #11alive pic.twitter.com/mxKuppAOSZ

8:40 p.m.: Group continues to march and it's been over an hour after they started at Woodruff Park.

Over an hour. This ATL group has grown a bit as they’ve marched and chanted for over an hour now. #11alive pic.twitter.com/saLjQFy0uy

8:07 p.m.: The group continues marching Downtown. Activists tell them not to engage with people who want to antagonize them.

Marching continues. Activists remind the group not to engage with anyone who would want to antagonize the group. #11alive pic.twitter.com/sBxr0CPcMJ

Group chanting and marching now. Lots of Black women in the group who say they were particularly hurt when they heard the #BreonnaTaylor decision. #11alive pic.twitter.com/T0VEdjuhDv

.#BreonnaTaylor placed in the center on Woodruff Park in #atl #11alive pic.twitter.com/lNk7yD274s

7:16 p.m.: A group of people is starting to gather at Woodruff Park in Atlanta.

Group gathering to protest in ATL tonight after decision made in #BreonnaTaylor case. #11alive pic.twitter.com/J9cHInDWHH

.@AttorneyGriggs now on the mic saying he has a message for Kentucky Attorney General @DanielCameronAG. #11Alive pic.twitter.com/u1YlQNLEB2

Protesters in SW Atlanta have started their rally. “What happened to Breonna Taylor could’ve happened to my mother...sister...aunt...any Black woman in my life.” #11Alive pic.twitter.com/ZLvzhMNRvh

5 p.m.: The first demonstration is scheduled to start now at Cleopas R. Johnson Park, down the road from the Atlanta University Center and near the Castleberry Hill neighborhood. A flier indicates it is being organized by Pastor Jared Sawyer and activist Mary-Pat Hector.