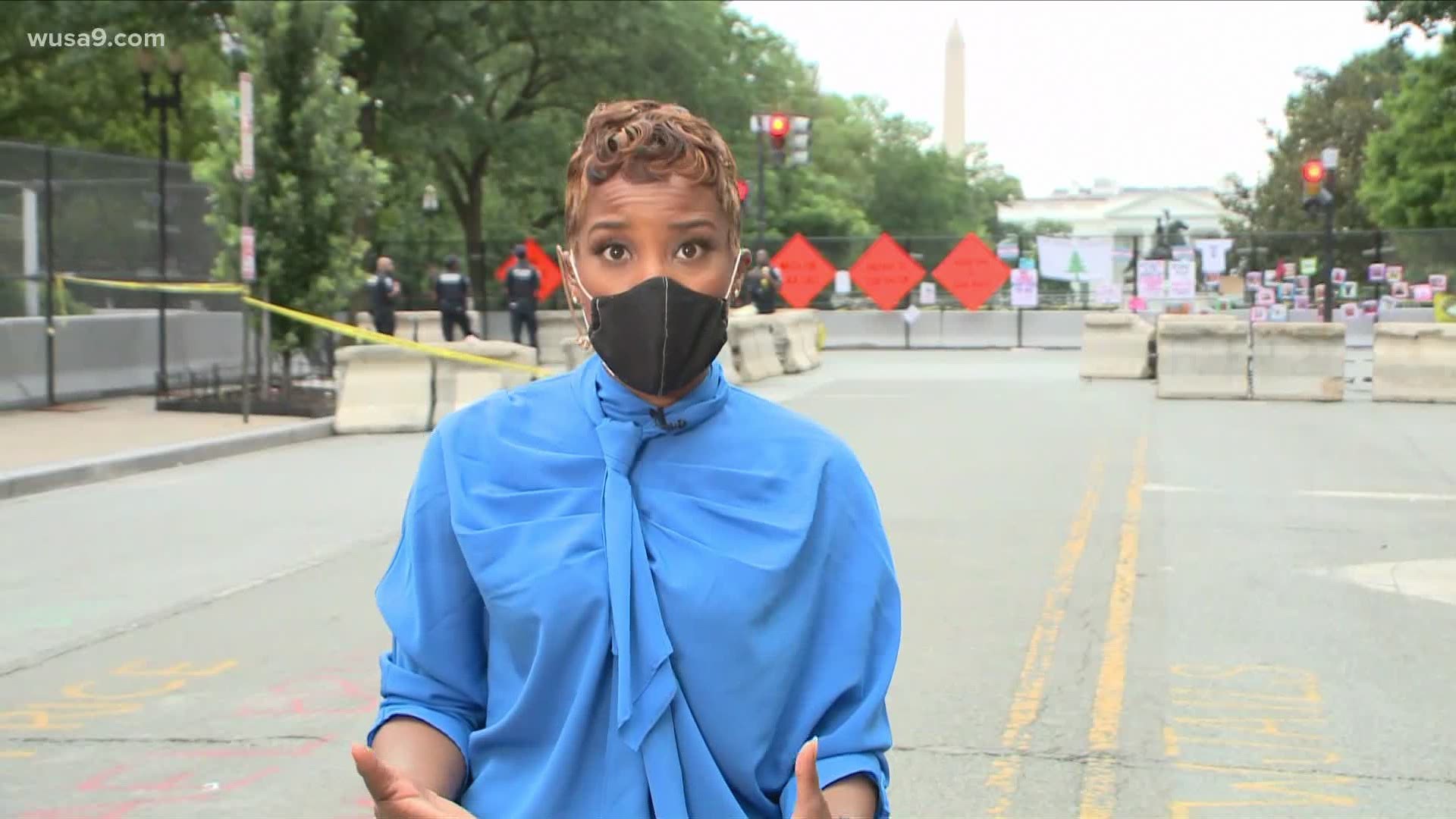 WASHINGTON — Protests have been seen across the District this weekend after D.C. police moved protesters out of Black Lives Matter Plaza.

Only a few protesters and police were seen in the area of Lafayette Park Sunday morning after about 40-50 protesters marched to Lafayette Square Park and were met by police at a barricade on Saturday evening. Demonstrators were heard through the streets of D.C. chanting against police.

Following weeks of mass protests around the District, there were much smaller crowds in areas that were once hot spots for popular protest gathering sites. Much of Saturday was dampened by rain in the late afternoon causing demonstrations over the weekend to be different from what it usually is.

Although there were smaller numbers, one woman told WUSA9 that she traveled down from Philadelphia with her young daughter so she could see where protests had occurred.

"It's very welcoming. It's a nice experience and a beautiful setting," said Love. "I just wanted to witness it in person instead of seeing it on television.”

Across the greater DC-area, protests and demonstrations for social justice have included people still gathered at Black Live Matter Plaza, and at Lincoln Park because of the Emancipation Statue. Protesters also gathered in Bethesda around 1 p.m.

What appeared to be a quiet night of demonstrations along Black Lives Matter Plaza Friday night got heated in the overnight hours.

Police pushed about 50 protesters back to 16th and K St NW around 2:30 a.m. Police on bicycles chanted "Move back" to relocate the crowd off the street, then began removing structures from along the street and confiscating any supplies found there.

D.C. Police have been attempting to clear the area of demonstrators since Monday, with sporadic clashes between protesters and police bubbling up overnight for most of the week. At times, police were seen using what appeared to be pepper spray and flash-bang grenades to disperse the crowds.

Saturday morning, D.C. Police were seen loading structures into the back of trucks, and one protester we spoke with told us they had confiscated supplies. 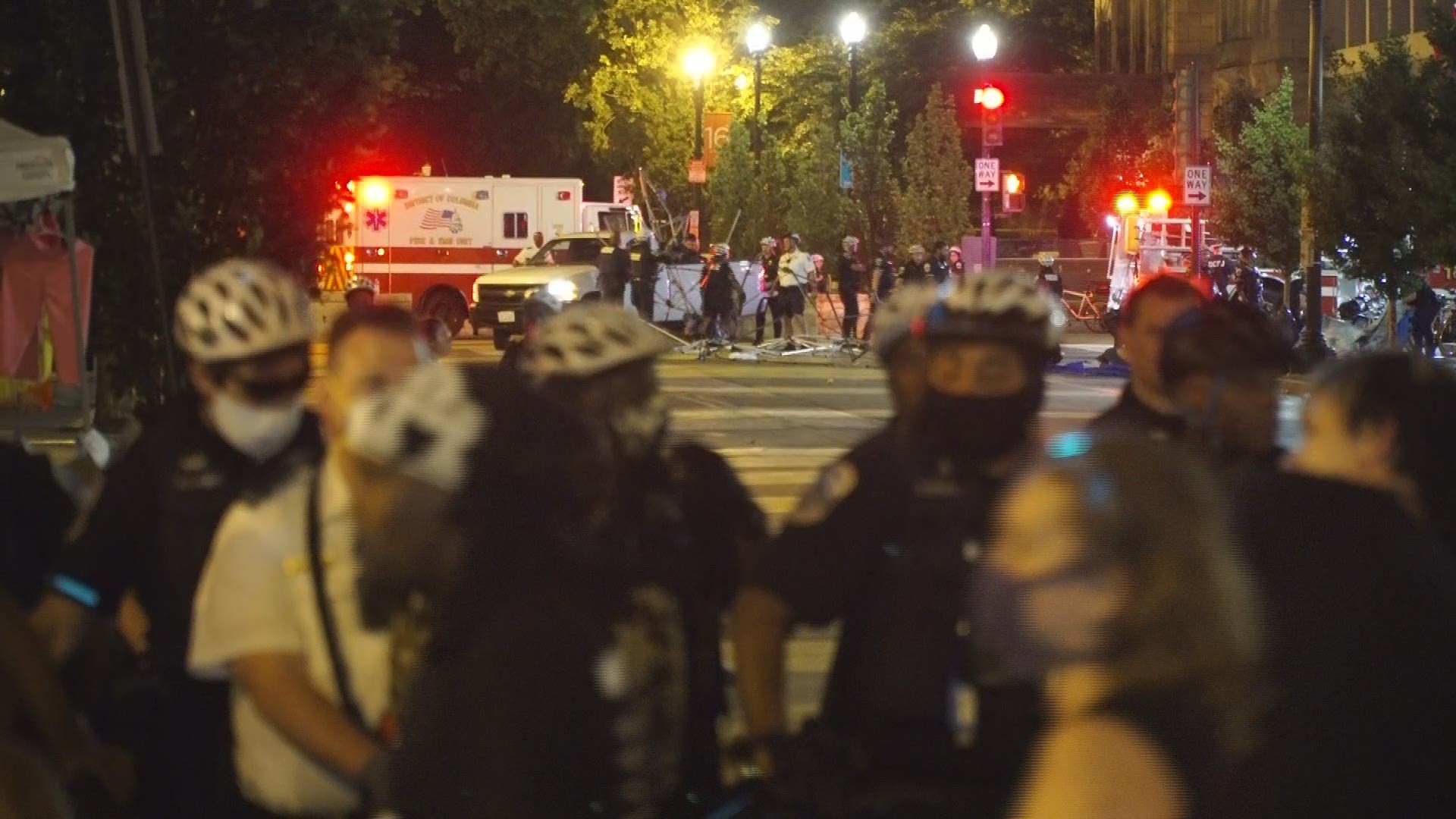 D.C. has been a hotbed of protest activity for more than a month following the death of George Floyd while in Minneapolis police custody. 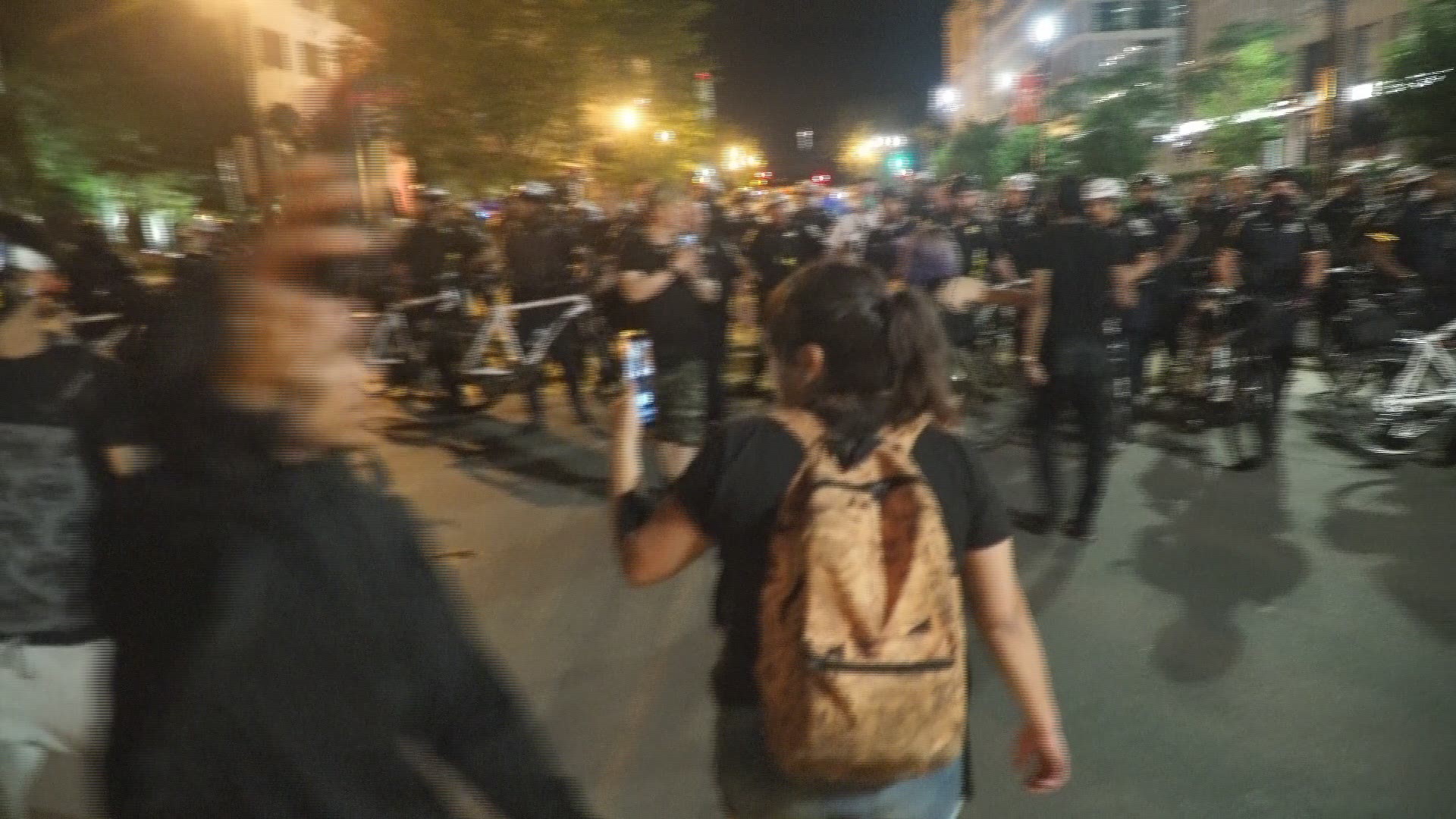 Over the past week, demonstrators have clashed with police and forced road closures, and attempted to topple a statue of Andrew Jackson, and called for the removal of the Emancipation Statue in Lincoln Park.

On Saturday morning, WUSA9 witnessed a man climb up a pole along 16th St. Firefighters were called to the scene to rescue the man with a ladder truck.

So far there's no word on whether any arrests have been made or citations issued.

There are planned gatherings that will be held this evening.

Stay with WUSA9 for the latest on protests and demonstrations happening in D.C.

RELATED: DC Police may be banned from using pepper spray at protests by July 7

RELATED: What is the Veterans' Memorial Preservation and Recognition Act of 2003?