Through protests, a verdict, and sentencing, Atlanta women find their calling in activism

Before the video that shocked and changed the world, none of these three women considered themselves activists. 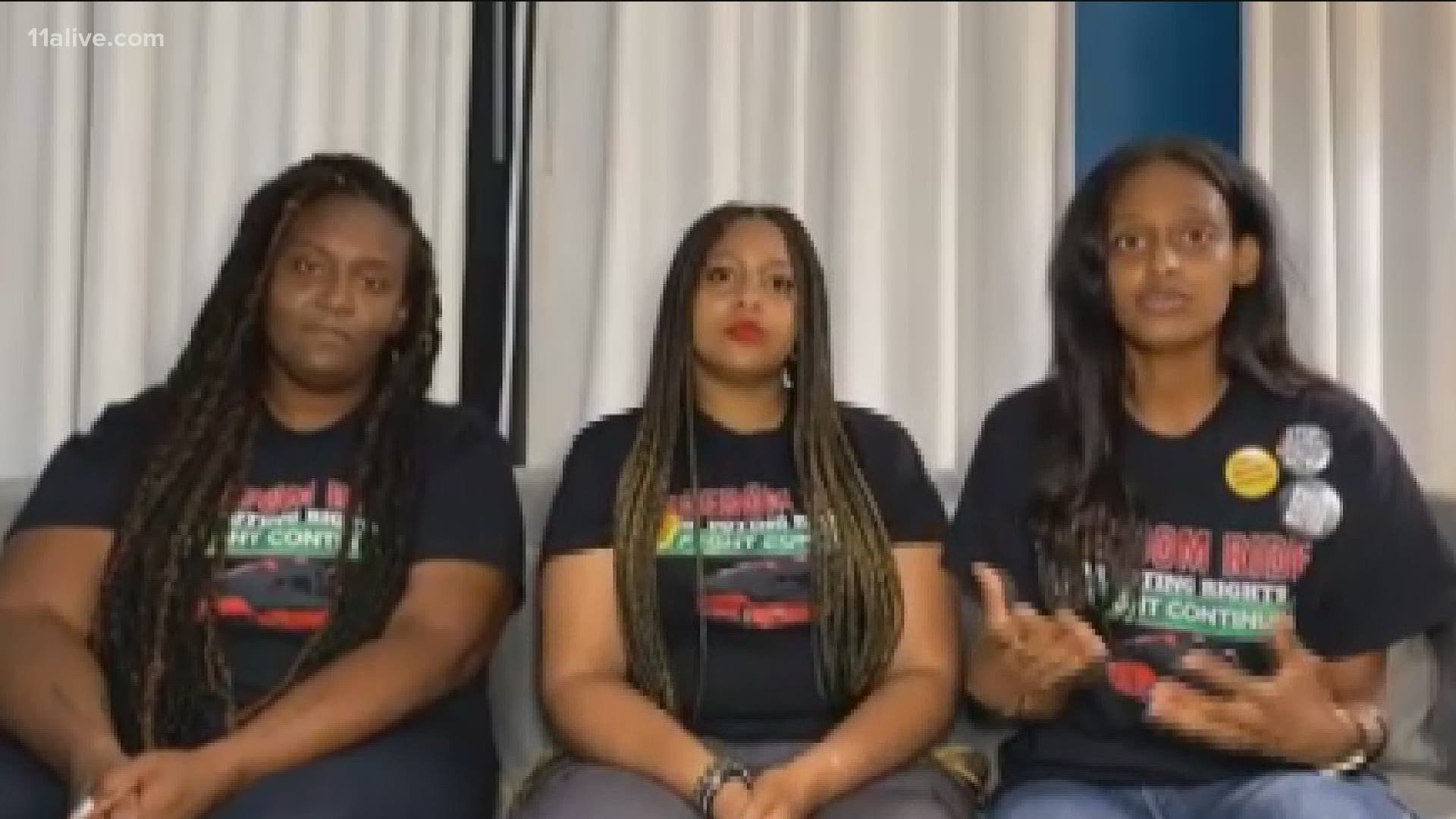 WASHINGTON — Over the past year, many activists and protestors told 11Alive during countless days of protest, that true justice meant George Floyd would still be alive.

So even with a nearly two-decade prison term handed down on Friday, it comes as a hollow victory for some.

Still, three Atlanta activists said the past 12 months meant they found their true calling, even if it was a hard call to answer.

“I know I, personally, would not be sitting here had I not see what happened to our brother, George Floyd,” said Hannah Gebresilassie.

The young activist sat in a hotel after traveling from Atlanta to D.C. for the Black Voters Matter Freedom Ride for Voting Rights. The ride is a national education campaign to increase support for voting rights legislation.

Gebresilassie sat next to Britt Jones-Chukura, and Crystal Greer as they reflected on the journey to DC, which started with the murder of Floyd.

“We watched this man die on camera in broad daylight,” said Jones-Chukura.

Before the video that shocked and changed the world, none of the three aforementioned women considered themselves activists.

“I had no background in organizing, protesting, activism, any of that,” Jones-Chukura said. “But I said, 'You know what? I don't know what I'm doing. But I'm gonna take it to the streets and protest.'”

In fact, when the protests started in Atlanta’s Centennial Olympic Park, the trio didn’t even know each other.

“I don't think the three of us would be sitting here today as a had we not been a part of the uprisings, organizing in different capacities,” Gebresilassie said.

And so, throughout a year of protesting, marching, a verdict, and now sentencing for Derek Chauvin, the women’s world changed, forming into full-on activism. But, what they think hasn’t changed is equal justice.

“In 2021, we still have a broken criminal justice system. And so when we examine these types of situations, we hold our breath,” Greer said. “We are still fighting for a criminal justice system that actually works and is equal and fair. And so that is why, personally, I'm still not happy with the sentencing we saw today.”

They believe 22.5 years for the murder of Floyd is an incomplete sentence.

“For a whole life that was taken is absolutely not enough,” Jones-Chukura said.

But if it wasn’t for the past 12 months of activism, their anger over Floyd’s murder, and a desire to do something, they wouldn’t be doing what they desire; whether it’s fighting for voting rights in D.C. or journeying back to Georgia to prevent more unjust deaths from happening

“We can't stop here. It does not stop here,” said Gebresilassie.

In 2021, the women formed the non-profit Protect the Vote, because they strongly believe protecting voting rights and informing voters is what can lead to true change in the criminal justice system.

“We have things in place like the Jim Crow filibuster, which is allowing important pieces of legislation like the For The People Act, to be blocked. The John Lewis Voting Rights Advancement Act also has not passed yet," Greer added. "So, as calling on our community members, our family members, our friends, to reach out to their senators, and let them know that we need these two pieces of legislature legislative acts to pass. You got things going on, not only in Georgia, you have things going on in Arizona and Texas. right. It’s just, it's a mess, really.”

The trio hopes to grow their organization and strengthen their activism in the community, through volunteers and organizing protests across the state.

“We need to start reimagining our systems, reimagining what it looks like to be free and treated equally in America, abolish the filibuster,” said Greer.

“We're out here on this tour for voting rights. But we also recognize that we're also fighting for human rights," Gebresiassie added. "Everything is interconnected in our communities. And so we're out here to stand against all injustices.”

They continue to work with other Georgia activists to call for similar justice in other police misconduct cases.

It’s all a journey - one that started with Floyd’s murder - that they hope will lead to real change in their lifetime.