Black Georgia lawmakers talk about their encounters with police. 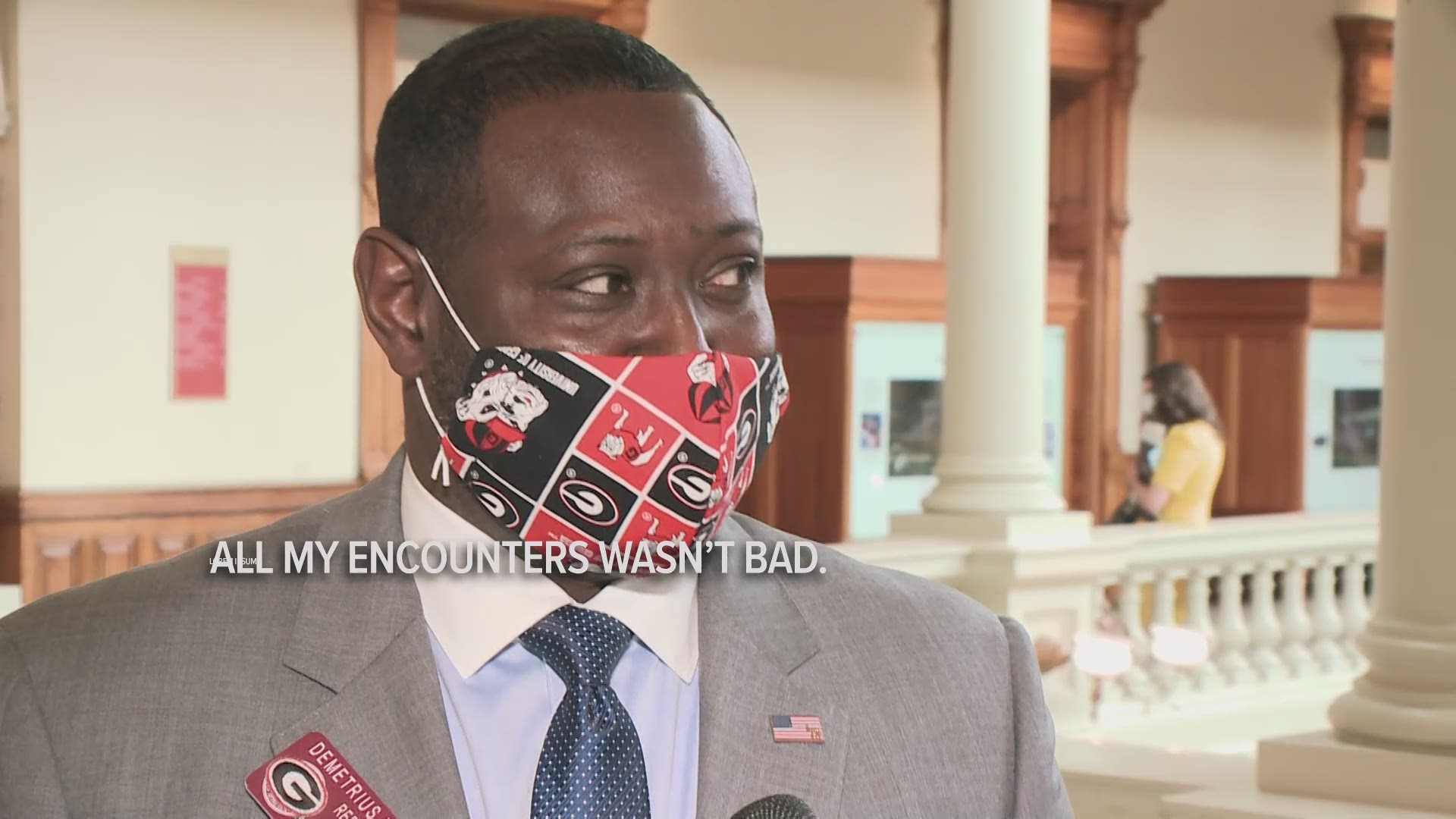 ATLANTA — During the final days of the 2020 session of the Georgia General Assembly, 11Alive News approached African-American legislators to describe unusual encounters they'd had with police. Many of them had stories to tell. They follow below. We've edited them for length.

"All my encounters weren’t bad. But at this particular time, I was at college... shooting pool, having some wings, having a good time" at an establishment in Athens.

"And the wait staff let me know that 'hey, somebody took your jacket off the wall.' We turned around and looked and lo and behold the jacket was gone."

"We ran down the steps and then ran down the street to see if we could just see the jacket on anybody. And lo and behold, we did catch up to – it was a group of people."

"They were definitely a different race than I was."

"And we confronted them ... When the cops showed up, I had just taken the jacket in my possession. And so the cops grabbed me ... like I was the guy stealing the jacket. And I was actually the victim.

Rep. Douglas played football at UGA and pro football in the NFL.

"When you live in Gwinnett and there’s only 70,000 (population), you don’t have very many Blacks. The police didn’t quit stopping me in Gwinnett until 1994."

"Once they said they stopped me because I was going too slow."

"But they saw somebody of color. And it’s like, 'OK, where are they going?'"

RELATED: Tyler Perry pens essay about 'exhausting' fight against racism in the US

"I was at the Walmart over off Camp Creek Parkway in my van. My wife and daughter were inside" the store.

"The police came to my van and told me to get out. I asked them why. They never answered me. They threw me up against the side of my van. And I’m still asking, OK what’s the problem? What’s going on? They tell me to shut up."

"So finally, my wife and my daughter came out of the store. They were scared to death because they didn’t know what was going on. Police didn’t talk to them. Basically told them to go stand on the side and mind their business."

"One of the officers, that was on the phone apparently, got the information ... that I was not the person that they wanted to arrest. And they never apologized, nothing."

"Those things, you don’t forget them."

Rep. Bruce has been in the General Assembly 17 years.

RELATED: Man wronged in past by police saves officer from burning car

"I grew up in Baltimore, Maryland."

"I remember just driving through Baltimore and being pulled over by the cops just because I was 'driving while black' ... It stuck with me. I’m 51 years old. Still with me."

"These four guys, four white men in an unmarked car followed me. For miles."

"It was four police officers. And they followed me from where I was working a landscaping job almost to my neighborhood in the city."

"And they said ‘What are you doing? We just want to make sure you’re going home, you’re getting to the right place.’"

"We have to really see – what is it really like to be a Black man in America? When the police are right at your heels?"

"How would you feel if that was your constant state of being? That’s kind of how it is in America."

Rep. Beverly is a pediatric optometrist in Macon.

'You broke my wrist!' | Georgia police sued for taking down wrong man

What happens after a police department disbands?

US police registry would fail without changes in almost every state