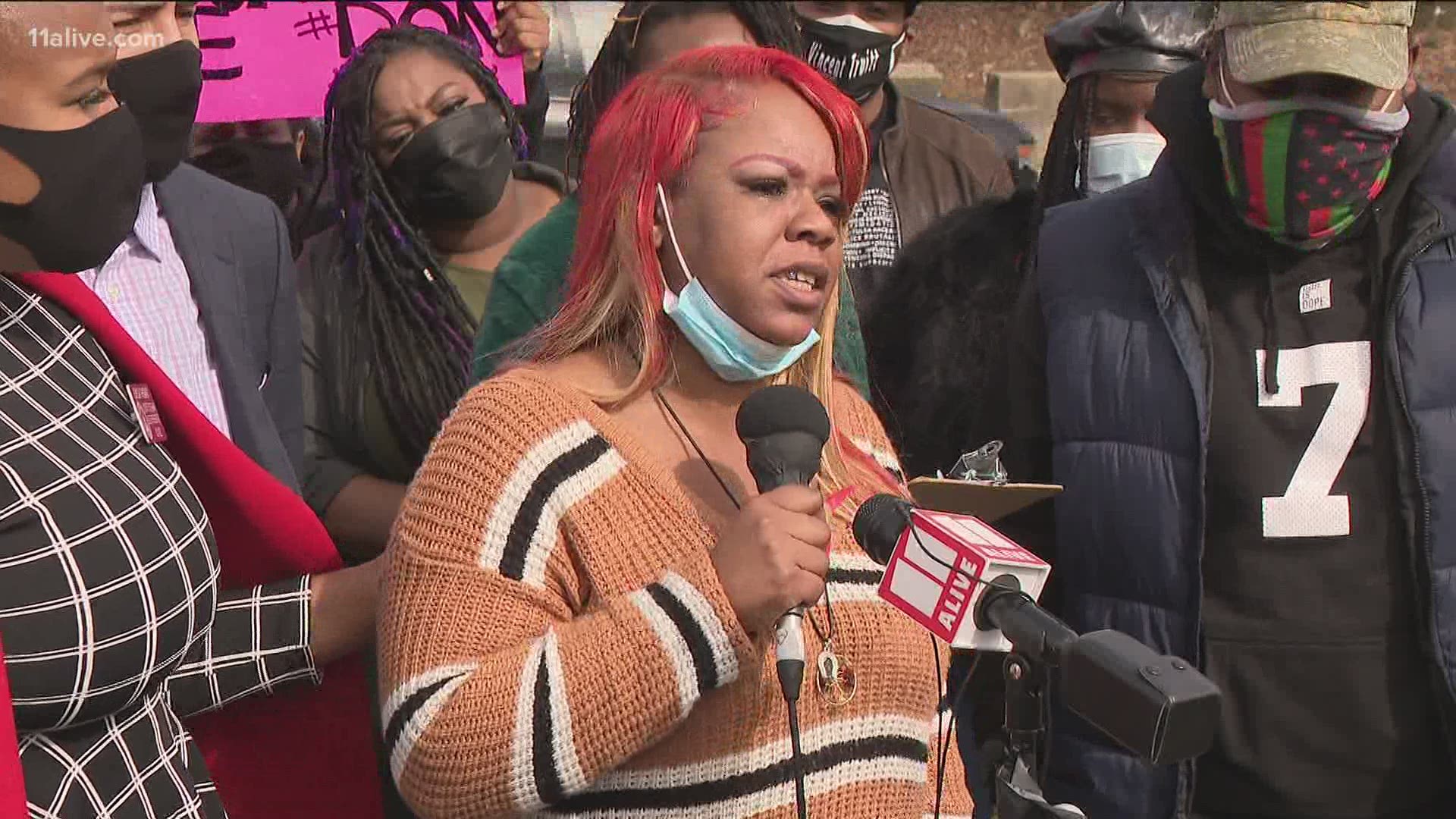 Tomika Miller, the widow of Rayshard Brooks, and a lawmaker/activist collective on Thursday demanded that his murder case remain within the metro Atlanta area.

The called for Georgia Attorney General Chris Carr to place the case in a similarly situated jurisdiction to Fulton County, where new DA Fani Willis asked last week to have the case reassigned.

It's not yet clear what Carr will decide to do with the case.

Willis has alleged that former Fulton DA Paul Howard used the case as a campaign prop, and said that made it impossible for her to prosecute it.

But Miller and The People's Uprising collective voiced sharp disapproval with Willis' decision. Brooks' wife said that when she heard the news that the case might be taken out of Fulton County, "I fell to my knees and I cried." She said Willis had not told her in advance of the decision, and that it was a "slap in the face."

"I stand here today asking that Fani really think about what she did, because not only did you hurt me, but you hurt everyone who is out here who was counting on you to do the right thing," Miller said. "You said you don't run from hard cases but baby you ran from this one."

State Rep. Erica Thomas, an Austell Democrat, said that instead of celebrating Brooks' birthday last Sunday, they were again thinking about the painful case.

Thomas added that they were demanding a jurisdiction that has previous experience trying police use of force cases.

"We don't have time for you to get some training on how to do it. We want someone that has done it before and knows the procedures and can give... the family first of all the justice that they deserve."

Atlanta Councilman Antonio Brown asked for Carr to give the case to "another county that can truly be able to give this case a fair chance."

Activist Kimberly Jones similarly gave notice to public officials that the handling of the case will be closely scrutinized by the community, saying that "it's the people's ability to hire and fire - that's their vote, and so we voted for people who promised us that they would give us justice."

Attorney Gerald A. Griggs said "we are sending a message."

"We may not be marching right now, because we just marched to the polls, but we're watching you. We want justice for our brother, and we want it right now," he said. "So we're issuing a challenge to every elected official to do what's right."

Miller, Brooks' wife, said she was simply asking "that somebody please take into consideration of how I feel, how my family feels."

Tomika Miller, the widow of Rayshard Brooks, and a collection of lawmakers and activists will be speaking Thursday afternoon about the potential transfer of the case outside Fulton County.

During the election last year against the former longtime Fulton DA Paul Howard, Willis suggested the case might have to move, alleging Howard had inappropriately handled the case against ex-Atlanta officer Garrett Rolfe as a tool for his re-election campaign.

Willis told The New York Times last week that, "I truly believe my predecessor’s conduct made it impossible for this office to prosecute the case."

In a 1 p.m. press conference on Thursday, which will be held at the Peoplestown Wendy's where Brooks was shot to death by Rolfe last summer, Miller will be joined by state Rep. Erica Thomas, state Rep. David Dreyer, Atlanta Councilman 'ntonio Brown, and attorney Gerald A. Griggs.

A release said they would "voice their concerns regarding the transfer of the Rayshard Brooks case."

Last year, Willis told 11Alive that Howard using images of the Brooks case in campaign commercials on TV and radio was evidence he was using the prosecution "clearly for his political benefit."

"Quite frankly, I do not know if we are legally going to be able to keep the Brooks case in Fulton County," as a result of Howard's campaigning, Willis told 11Alive Anchor Shiba Russell after she won the election.

"It is just a shame that we had a district attorney that would put his own needs before justice for the family of Brooks and the community at large," she said.

In an exclusive interview with 11Alive last year during the election cycle, Howard talked about the stirring criticism, Brooks' death, and other high-profile cases.

He said he expected some of the criticism.

The shooting death of Brooks rocked Atlanta last summer, setting off the city's most searing protests in the middle of nationwide Black Lives Matter demonstrations.

The incident started as a traffic stop for a suspected DUI after employees of the Wendy's found a man asleep a the wheel in their drive-thru line.

Video and various reports from the scene suggest Brooks took Rolfe's taser after Rolfe initiated an arrest, and discharged it toward the officer while running away.

Brooks was then allegedly kicked and stepped on as he was lying in the Wendy's parking lot. Rolfe was charged with felony murder and multiple counts of aggravated assault by the district attorney. Another officer involved in the incident, Devin Brosnan, also faces an aggravated assault charge.

Massive protests included the vivid image of the Wendy's being burned to the ground. The chief of the Atlanta Police Department at the time, Erika Shields, stepped down from her position hours after the deadly officer-involved shooting.

The Wendy's where the shooting became the site of a makeshift memorial for Brooks before eventually being cleared following the shooting death nearby of 8-year-old Secoriea Turner.

Activists have continued to call for the site to be transformed into a peace center, to be named after Brooks.