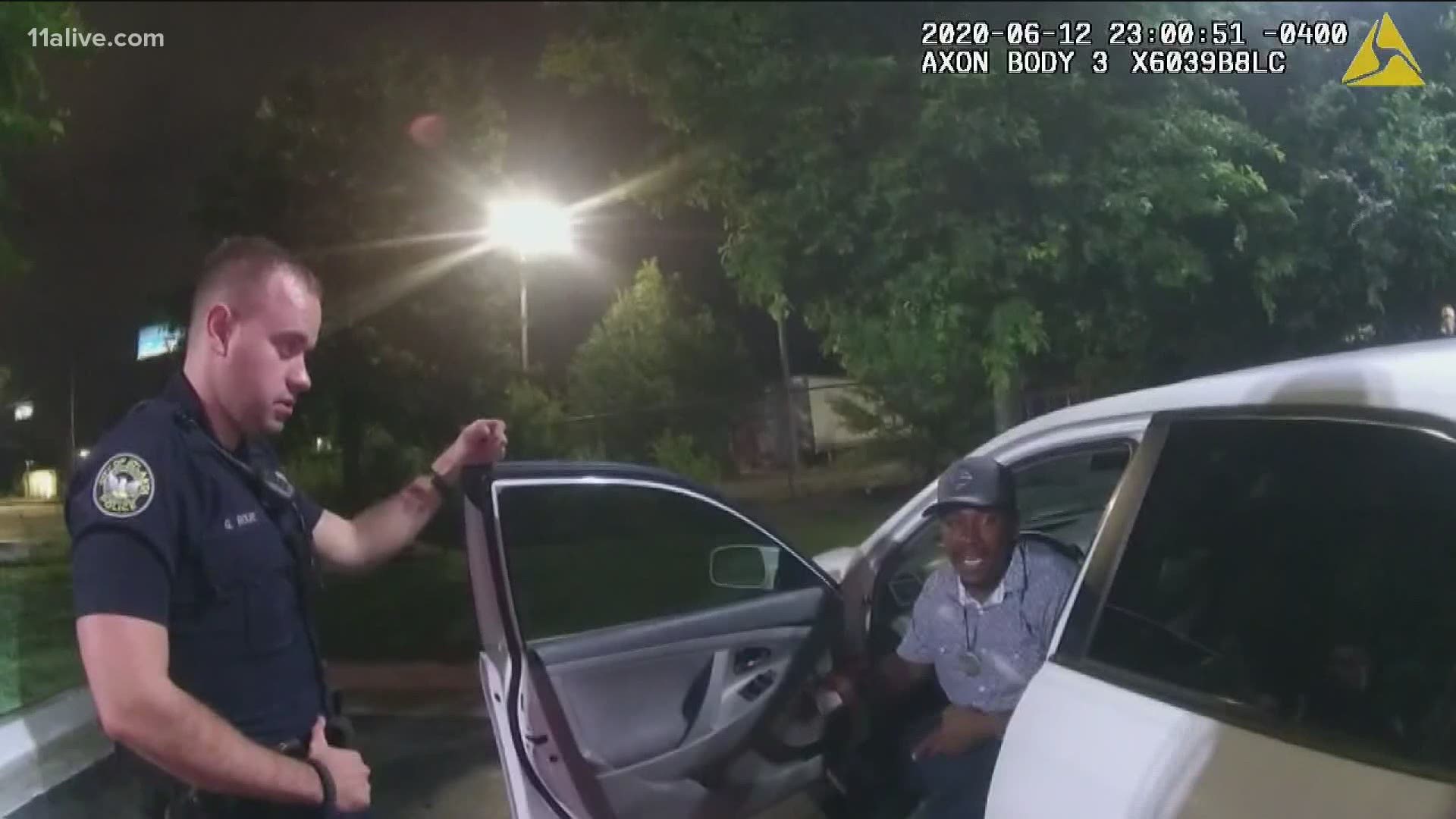 ATLANTA — Atlanta Police have released bodycam and dashcam video showing the moments leading to the fatal shooting of Rayshard Brooks in a Wendy's parking lot.

Police were called to the scene around 10:30 p.m. after complaints of a man asleep at the wheel near the Wendy's drive-thru line.

The man, later identified as Brooks, failed a field sobriety test, according to the Georgia Bureau of Investigation. When officers tried to take him into custody, a struggled ensued. During the altercation, officials said Brooks grabbed an officer's Taser and began to run away. Moments later, shots were fired.

One officer involved in the incident, Devin Brosnan, has been placed on administrative duty. Another, Officer Garrett Rolfe, has been terminated.

On Saturday, the GBI released footage from the Wendy's surveillance camera showing the shooting.

11Alive is continuing to watch the videos. Below is a summary of parts of what we've seen. Check back for more updates as we continue to review the footage.

Brosnan's bodycam footage shows him first encounter Brooks, who appears to be sleeping, in his car in the drive-thru. Brosnan asks Brooks to move his car. Seconds later, Brooks appears to fall asleep again, prompting Brosnan to again ask him to move his car.

Brooks pulls his car into the parking lot and engages in conversation with Brosnan and Rolfe.

This is the first 42 minutes of the police bodycam video. Warning: Contains disturbing images and adult language:

The officer has Brooks perform a field sobriety test.

Brooks admits to the officer that he drank "one and a half margaritas." He submits to a preliminary breathalyzer test.

"I don't want to refuse anything," Brooks says.

After taking the test, Rolfe tells Brooks, "I think you've had too much to drink to be driving."

As the officers place cuffs on Brooks' hands, which are behind his back, Brooks appears to begin to struggle with them.

At that point, the body cam begins to shake.

"You're gonna get Tased," one officer says.

Seconds later, an officer shouts, "Hands off the Taser."

The body cam appears to fall on the ground.

One officer yells, "He's got my [expletive] Taser!"

Footage shows one officer appear to take out a Taser as the camera points up into the dark sky.

What sounds like three gunshots are heard. The actual shooting is not on that bodycam.

A commotion is heard.

"That's totally unnecessary," a bystander is heard saying, while another says, "That's messed up man.'

Rolfe's body camera offers a view that's similar to Brosnan's video. The camera is also knocked down in the struggle, and the shooting itself is not seen.

This is a portion of that video:

Rolfe's full video is a one hour and 28 minutes, and ends with him back at what appears to be police headquarters.

Dashcam video from Rolfe's patrol car shows a clearer view of the struggle between the officers and Brooks:

Wendy's burns down after night of protests

Less than 24 hours after the shooting, Wendy's where the incident occurred was engulfed in flames after a day of protests in the area.