The trash company told 11Alive it is sending a remediation company to clean the stains Thursday morning. 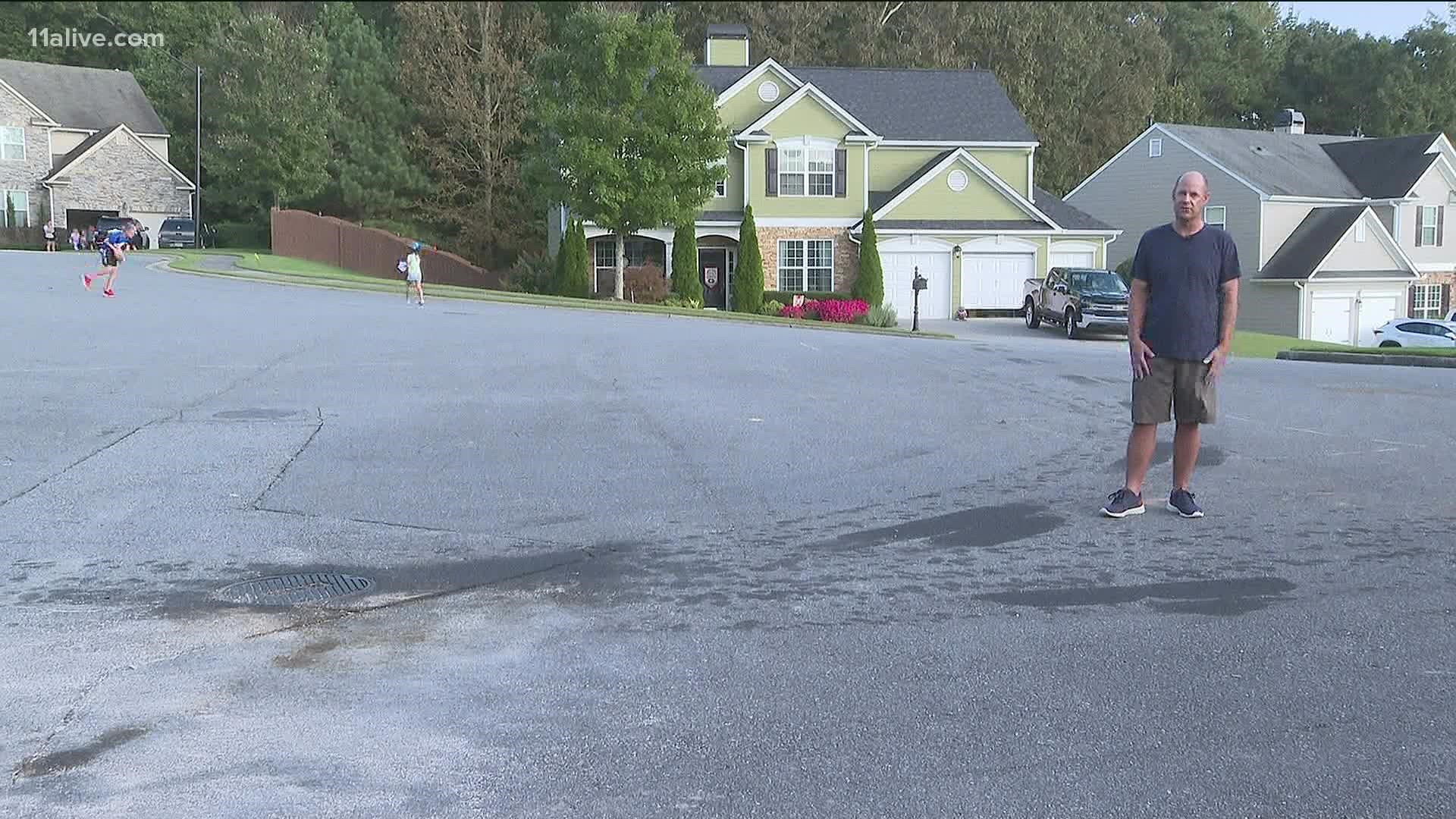 CHEROKEE COUNTY, Ga. — Some Cherokee County residents are asking for help after they said a garbage truck spilled hydraulic fluid all over their streets. It happened over a week ago, and at this point they've called the county and trash removal company multiple times with no luck.

Resident Andrew Korf said he has used trash removal company Trash Taxi for 13 years and has never had issues. Korf said his neighbor had this same problem just last month.

"The homeowner saw it happening. [The trash truck] stopped and left the neighborhood, but that didn't happen this time," he said. "The whole community, all the roads, all the stops they made have large oil stains, including mine."

Surprised and frustrated, he wrote on his Cherokee County neighborhood Facebook group, after realizing that the stains, which he said he believes are hydraulic fluid from the garbage truck, extended past his home.

In fact, there were stains in his mother's adjacent neighborhood, too.

"The neighbors were not happy. In general this is a very nice community and the roads looked fine prior to Monday morning and now they don't and frankly if you drove through here you wonder to yourself what on earth happened? So they're astounded with what happened," he added.

Korf said he first contacted Trash Taxi that same morning. He's on the board of the neighborhood homeowners association, which let him know the roads belong to the county. So he reached out to the county, which forwarded him to Public Works.

He said to this day, he has personally still not heard from Trash Taxi.

"No one returned my call so I figured nothing is going to happen," he said.

However, he said one of his neighbors received a voicemail from the company Tuesday afternoon.

"They seem to be pushing back by asking for video. I didn't have a good feeling they were going to respond," Korf said.

In a phone call today, the trash removal and recycling provider told 11Alive that a remediation company is going to the neighborhood Thursday morning to clean the stains.

A representative said it took the company a while to come out and clean because they’ve been "very backed up."

"They picked up trash yesterday and you would think they'd put something on my door saying we intend to fix the issue -- they could've put a sticky on the trash can saying they're going to take care of it but that wasn't there. So as far as I was concerned, we were still left on our own," he added.

Trash Taxi said that they reached out to as many customers as possible to let them know, but are aware they did not get to everyone.

"I'm not selling my house but if I were, I'd be concerned that a homeowner or potential home buyer would value my house less or at the very least require that I clean up the streets in front of the home, which obviously is something I think is not going to be cheap to do," Korf said.