Restaurateur Darius Williams posted to Instagram about the incident, which left his employees shaken. 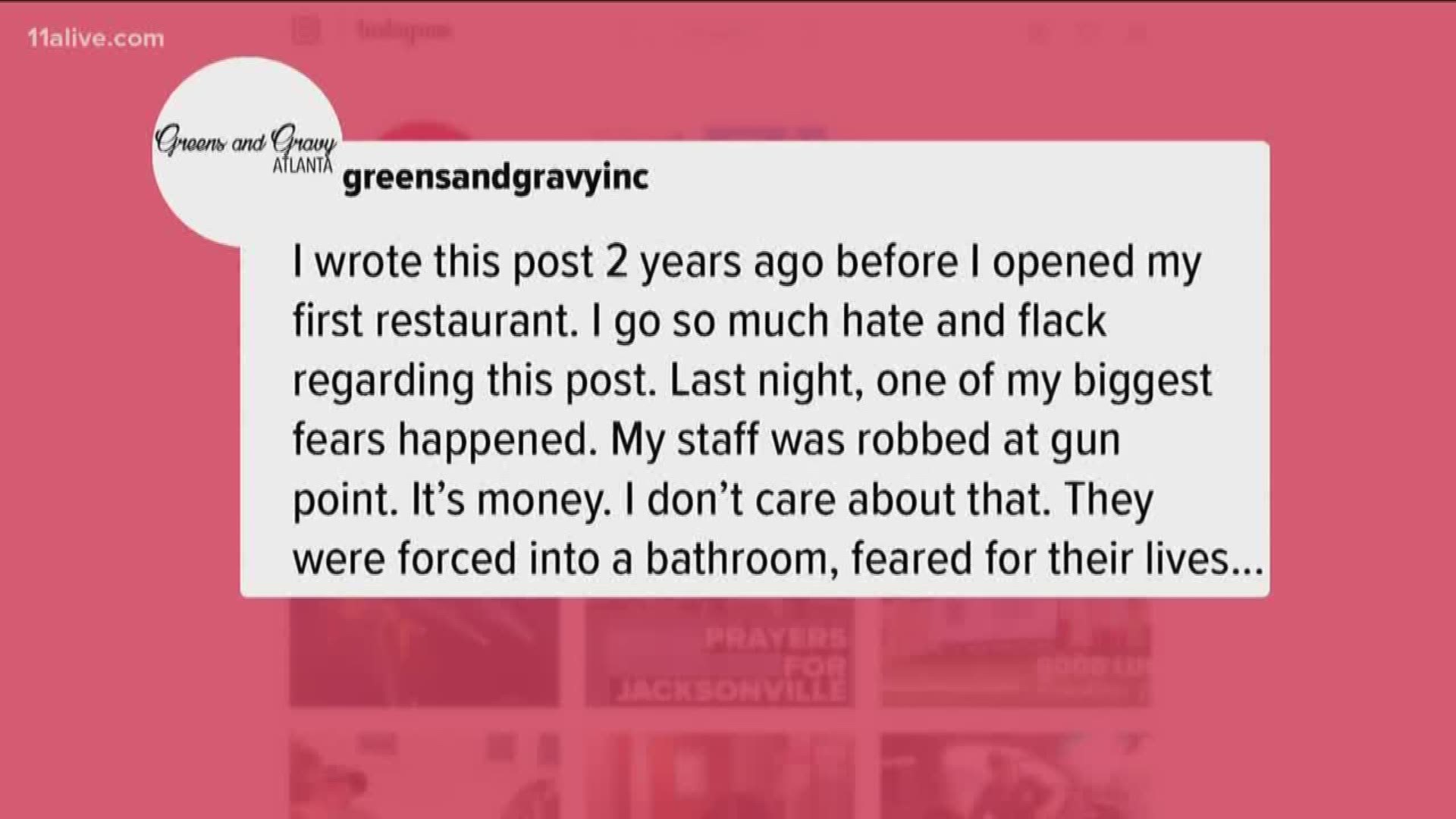 ATLANTA — The owner of a popular southwest Atlanta restaurant will begin refusing cash after his staff was robbed at gunpoint.

Darius Williams, a local chef and restaurateur who also runs a popular YouTube channel, posted about the harrowing incident to one of his restaurants’ Instagram pages on Monday.

Williams said Greens and Gravy, on Ralph David Abernathy Blvd. in southwest Atlanta, had been robbed on Sunday. Atlanta Police confirmed the robbery with 11Alive.

Williams posted a screenshot of a 2017 Facebook post, near the time he was opening Greens and Gravy, that said he wouldn’t be accepting cash. He said he received “so much hate and flack regarding this post” and apparently reversed course.

“Last night, one of my biggest fears happened,” he wrote on Instagram. “My staff was robbed at gun point.”

RELATED: Cashless restaurants on the rise in Atlanta, but the trend has its detractors

He continued to describe the frightening situation his staff endured.

“It’s money. I don’t care about that,” Williams wrote. “They were forced into a bathroom, feared for their lives, while some low life got away with nothing more than a few hundred dollars.”

Williams said that Greens and Gravy, his other Atlanta restaurant, Soul Crab, and a soon-to-open Soul Crab in Chicago would all only accept credit and debit cards.

Atlanta Police Public Affairs Officer Jarius Daughtery said the thief entered the restaurant around 11:25 p.m. through the back as staff were in the kitchen and cleaning up for the night.

The suspect demanded a silver and blue bag, according to police, which the restaurant used to make deposits.

After forcing the employees into the bathroom, the thief made off with $1,200, police said.

Restaurants and venues have increasingly opted to go cashless, though not without protest. Detractors have said it particularly disadvantages poorer people, who may not have the luxury of a debit card or bank account.

“My feeling is that you should take case,” Tonya Pike, an Atlanta restaurant consultant, told 11Alive in March. “Because it’s legal tender and it means a person doesn’t necessarily have to have a bank account to conduct business.”

But supporters say it can prevent situations like Williams’ at Greens and Gravy – a deadly 2017 robbery also led Barcelona Wine Bar in West Midtown to forego cash - and they’re gaining ground.

A growing number of cities, including Philadelphia and, just this week, San Francisco, have prohibited going cashless.

Atlanta doesn't have an ordinance requiring businesses to accept cash. City Councilwoman Natalyn Archibong told 11Alive in March, though, that “it’s something we ought to watch.”