The "historic review" came about after a former student from the 1980s came forward with the reports of abuse: 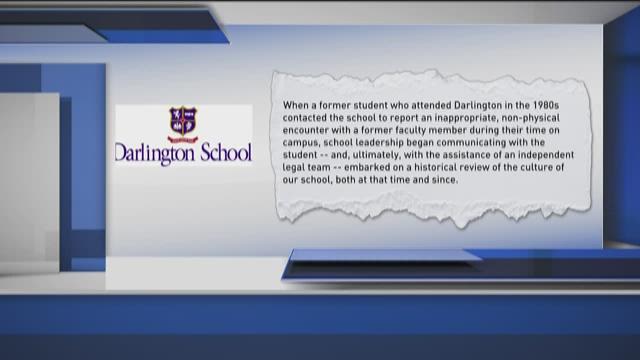 ROME, Ga. -- An elite prep school has opened a "historical review" of its culture after allegations of sexual abuse were made by a former student.

The Darlington School says it's sent more than 10,000 letters to former students and faculty in the mail alerting to them to serious allegations.

The private boarding school in Rome was established more than a hundred years ago.

Tim Lee, a therapist living in New York, tells 11Alive he is the former student who came forward with reports of abuse.

Lee says while he was a student at Darlington in the 80's, he was subject to years of sexual abuse at the hands of a former faculty member. 1Alive is not identifying him because he has never been charged with a crime. The school says they've never received any other complaints about that former faculty member.

Lee tells us he filed two complaints against the man with the school, but they fell on deaf ears.

AND | Lawsuit says Boy Scout council, Athens churches knew about sexual abuse and did nothing

The letter, dated May 26 and signed by L. Brent Bell, the Head of the School, says "the fact that a former student feels failed by Darlington is difficult, yet important to know. If you have been affected personally or have any information that you believe should be brought to our attention, we urge you to contact us."

A spokesperson released this statement to 11Alive:

When a former student who attended Darlington in the 1980s contacted the school to report an inappropriate, non-physical encounter with a former faculty member during their time on campus, school leadership began communicating with the student -- and, ultimately, with the assistance of an independent legal team -- embarked on a historical review of the culture of our school, both at that time and since.

This study continues to reveal that Darlington is not a school that promotes a culture of misconduct and abuse, and that the school did its best to promptly address issues brought to its attention at the time.