It happened near the intersection of West Peachtree and 15th street. 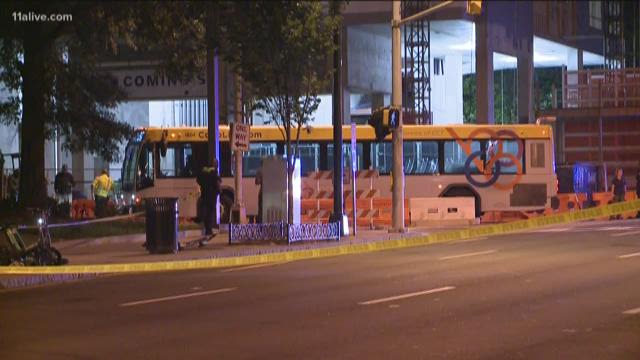 ATLANTA — A person riding a scooter is dead after being hit by a bus Wednesday night, according to officials.

It happened near the intersection of West Peachtree at 15th Street.

According to Atlanta Police, officers arrived to the intersection around 10:30 Wednesday night. Police said the man, William Alexander, appeared to have been trapped under a CobbLinc bus.

Atlanta Fire and Grady crews worked to free him, but officials pronounced him dead on scene.

Police said they are investigating the cause of the crash, but said at this time, they are unsure of who was at-fault in the accident.

This is believed to be the second person killed while riding on a dockless electric scooter this year. a 20-year-old rider was killed back in May near West Lake Avenue and Browning Street when a Cadillac hit him.

The driver of the Cadillac told police the man appeared on the e-scooter at the last second, and she tried to avoid hitting him, but was unable to. Police later arrested the driver and charged her with second degree vehicular homicide.

Family of the man killed, meanwhile, called the e-scooters dangerous and called for a ban.

“We do believe in our hearts that if it had not been the law - that he would have to take that scooter and put in the street - that he would be alive today," family said.

Already, Atlanta city officials have called for establishing a method of tracking scooter-related injuries and have implemented tighter restrictions. Several other metro Atlanta cities, however, have banned the scooters altogether, including Athens and Marietta.

Cyclist struck and killed in alleged DUI in Sandy Springs

DJJ board votes to remove commissioner weeks after 11Alive investigation