Smyrna officers save twin brothers from overdose at local restaurant

The donation of funding for Narcan and training has allowed the Cobb department to save multiple lives. 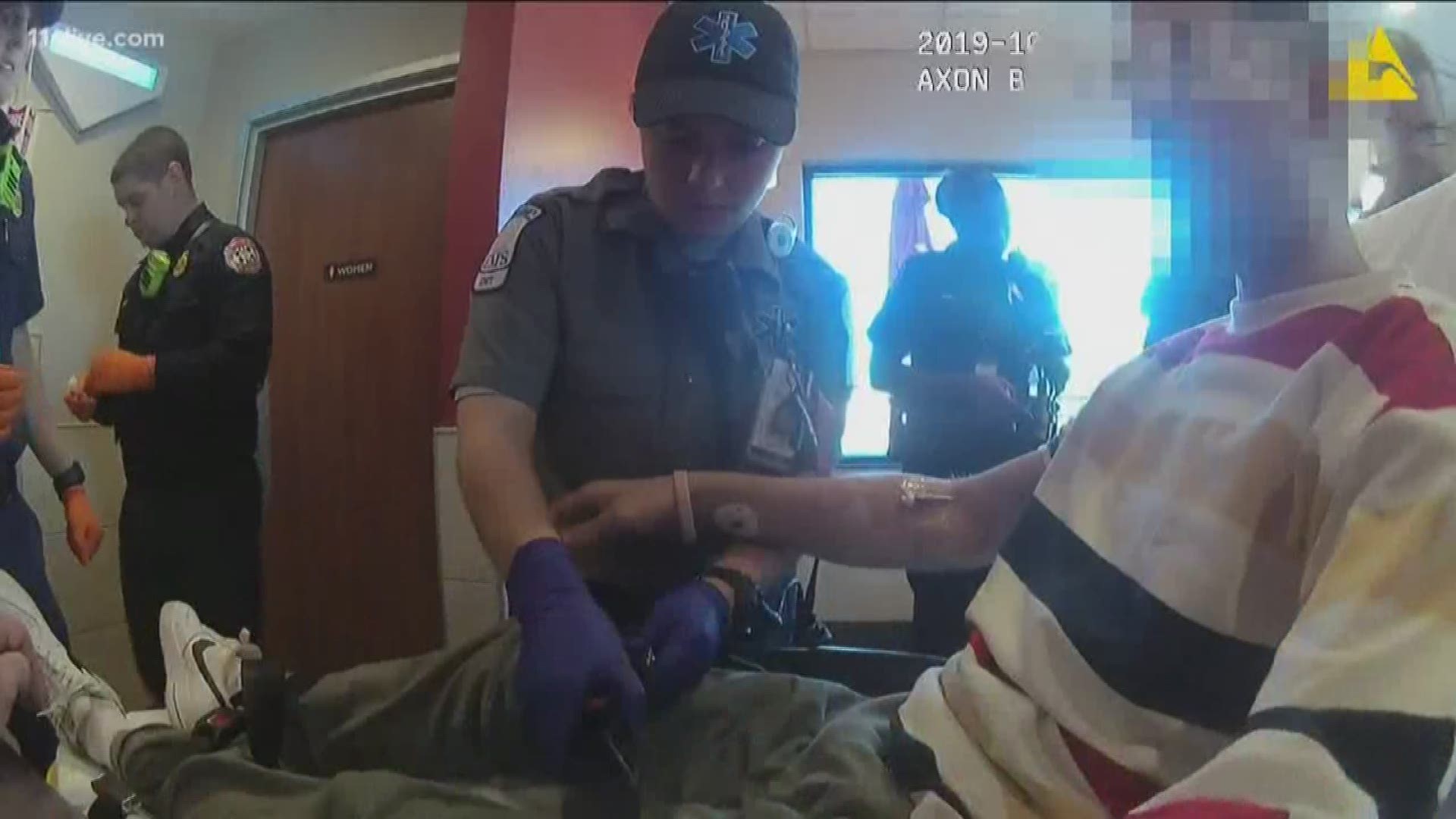 SMYRNA, Ga. — Just over a year after an organization donated more than $6,000 to the Smyrna Police Department to purchase Narcan and train officers in its use, the department says it is saving lives.

Smyrna Police in a press conference on Wednesday relayed the story of two lives - twin brothers - who were saved just days earlier at a local restaurant.

It all happened on Oct. 23 when four Smyrna officers, Esther Ruiz, Taylor Elliot, Robert Pfeiffer, and Jake Prough, found themselves responding to the Wendy's on Cobb Drive. It would soon become a call where lives were in the balance - and time was running out.

"When I arrived, I found a Hispanic male laying in the lobby of the Wendy's," Officer Elliot said. "I immediately started to check him for any vital signs, rise and fall of the chest, his pulse."

The man was turning pale and his breathing was shallow - but he was still alive. Officer Elliot found the other man in the bathroom.

"A civilian had already started doing CPR on the Hispanic male in the bathroom, so once I got in there, I was advised that he was breathing," Elliot said.

But, as Elliot said he was checking with staff about the other man's status, he heard a noise that concerned him greatly.

"As soon as I turned around, the male in the bathroom let out a long exhale and stopped breathing again," he said.

The man was once again subjected to CPR - this time from the officer. Officers Pfeiffer and Ruiz were the next to arrive and began to help stabilize the two men.

The officers soon recognized the two men, who happened to be twin brothers. Based on what they found, a small bag of suspected heroin - the officers believed the two were in the midst of a drug overdose.

Tactical medical training and a special overdose reversal drug known as Narcan would soon be two important pieces of a lifesaving story that this police department wants to highlight.

"Officer Ruiz came in and asked if I wanted Narcan," Elliot said. "I told her, 'Yeah, bring the Narcan'."

The nasal spray allowed officers to reverse the effects of the drug overdose.

Officers continued to work on the two men for several minutes before the fire department arrived and eventually saw the men regain consciousness.

"The Smyrna Police Department believes had the officers not had the training or the Narcan packs available to them, the two subjects would have surely died," the department wrote in a statement.

RELATED: What is "The Triangle"?

As for the officers themselves, they said they were just doing their jobs. Others who were at the scene that day said they didn't have time to think about how important their actions were that day. It sunk in later that they had saved two lives.

It was the Cobb Community Foundation and a group known as Community Squared that donated the money for these packs and the training back on Oct. 5, 2018.  Since then, the department said each of its certified officers has received tactical medical training and Narcan for similar emergencies.

Since they received the training and equipment, Smyrna Police have used Narcan four other times. The first time they used the life-saving drug was on April 30 - within hours of the responding officer receiving training.

For Officer Elliot, it was the first time he'd used his training with the overdose reversal drug.

Yevette Williams with Community Squared spoke for the agency during Wednesday's conference and said she was glad to work with the department. She also said they'll be taking even more action to combat opioid addiction - and death - in the near future.

"We are actually getting ready to kick off a program where we're going to tackle 'The Triangle'," she said, referring to the metro Atlanta zone where opioid and heroin addiction and deaths have become a noticeable problem.

"We would like to make sure that all law enforcement and, of course, first responders, have Narcan available and are able to get the training to use it."

Williams said Smyrna was one of six Cobb law enforcement agencies that her agency donated to back in 2018. She said 90 people were saved in the Marietta area in 2018 alone.

"That's 90 people who were saved in a very small area," she said.