The opposing groups faced off for hours in the city on Saturday, first downtown and then again at a second nearby location. 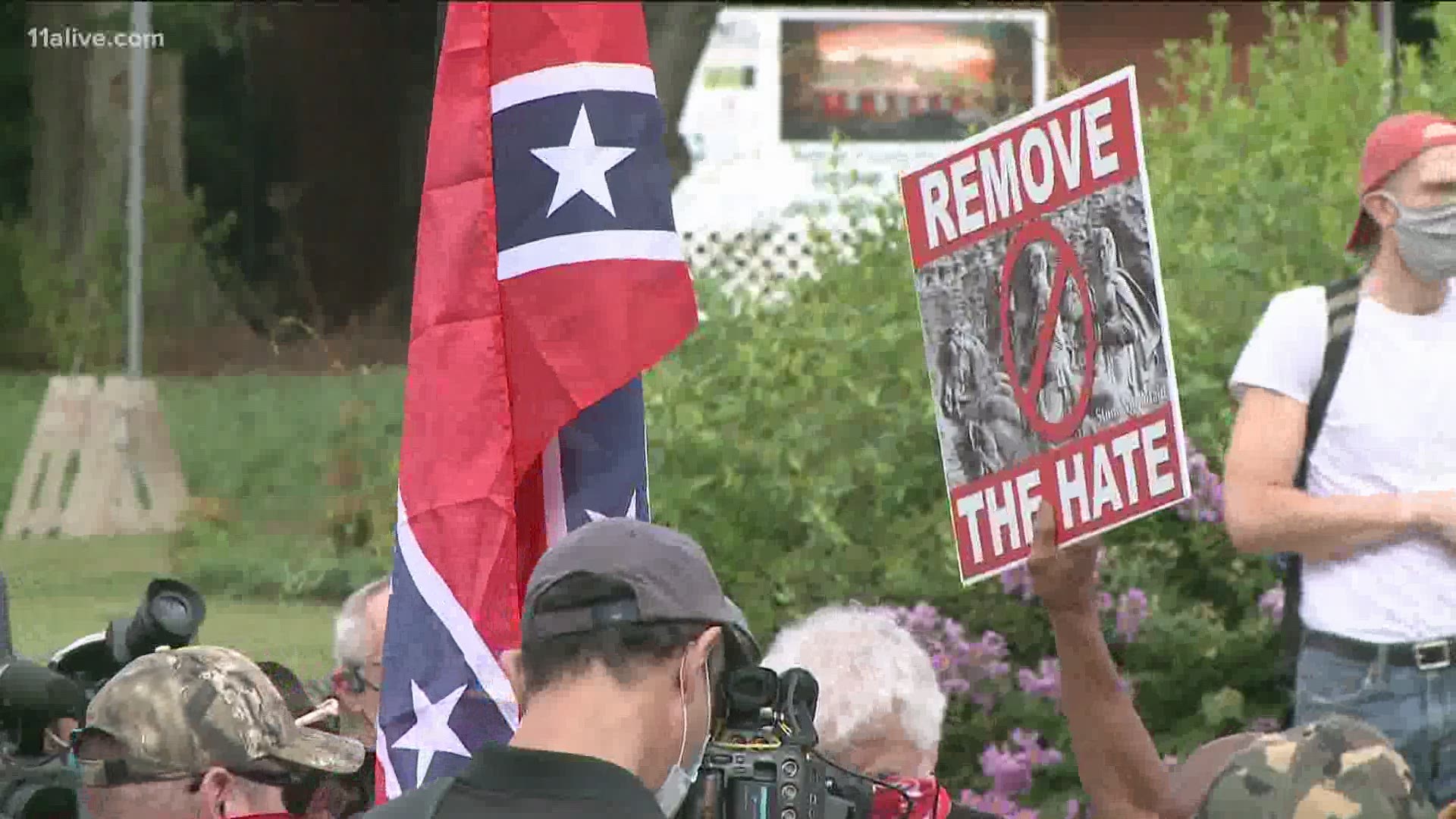 STONE MOUNTAIN, Ga. — White nationalist demonstrators and an array of young counterprotesters met in an anxious standoff for hours Saturday in Stone Mountain, but largely avoided escalating things into any kind of all-out clash.

The opposing groups were loosely organized on both sides. The white nationalist demonstrators, who appeared to be far outnumbered, were seemingly composed of neo-Confederates and militia groups like the III% Security Force.

On the other side, counterprotesters appeared affiliated under the banners of movements like Black Lives Matter and Antifa, as well as political organizations like the Democratic Socialists of America.

One particular activist group, F.L.O.W.E.R. United, had been visibly organizing the response ahead of Saturday.

The two sides met in the morning downtown in the city of Stone Mountain, after Stone Mountain Park itself was closed. Officials had closed the park in advance of the demonstrations, which appeared to be first organized as a "Defend Stone Mountain" rally by neo-Confederate groups.

Maura reported speaking to people associated with the white nationalists who came from as far away as Michigan.

After the downtown demonstrations dissipated, the groups reorganized after it appeared a lagging group of white nationalist demonstrators showed up and parked a row of trucks at a roadblock on Ridge Ave. in the city.

From there, the groups faced off at the roadblock for a number of hours, with shoving matches occasionally breaking out.

It appeared at one especially tense moment in the standoff that a flash bang went off, with reports of pepper-spraying by the white nationalist group. A small handful of counterprotesters were led out of the crowd appearing to be tearing up, with fellow protesters treating their eyes.

Beyond that, however, the groups appeared to avoid a larger confrontation.

The neo-Confederate groups had planned the initial rally as an apparent response to another group's demonstration at Stone Mountain Park in early July.

That group, calling itself the "Not F***ing Around Coalition" (NFAC) was comprised of about 100 to 200 armed people, all dressed in black.

In that July demonstration, the group's apparent leader issued a challenge to white nationalists, who have a history of gathering at the site. The NFAC leader spoke of the site's association with the early 20th-Century re-starting of the KKK and what the Atlanta History Center has termed the mountainside Confederate carving's "strong connections to white supremacy, Confederate Lost Cause mythology, and anti-Civil Rights sentiments."

RELATED: 'I'm in your house' | Armed group condemns systemic and overt racism, marches to Stone Mountain

"I want the heart of the Ku Klux Klan to hear me no matter where the f*** you are," he said. "I'm in your house. Where you at? You made a threat. We don't threaten."

A white nationalist group purporting to organize the event on Facebook referenced those "who wish to erase our Ancestors Heritage and destroy our Monuments!"

"The time to fight back is now!" it said.

F.L.O.W.E.R United called on supporters to rally against the white nationalists.

"FLOWER turned away white supremacists in 2019, and until the racist monument carved onto the side of Stone Mountain is finally sandblasted away, we will keep turning them away," the group's site said.

Small number of militia creeps in the area.

Officials had suspended most public transportation into the city and asked the general public to avoid coming to Stone Mountain throughout today.

"Citizens and visitors are encouraged not to venture nearby the affected areas and do not proceed into or through demonstrations. DO NOT confront the protesters," a city notice said.