The second day in trial proceedings for Bo Dukes, the man accused of concealing Tara Grinstead's death, got underway Tuesday in Wilcox County 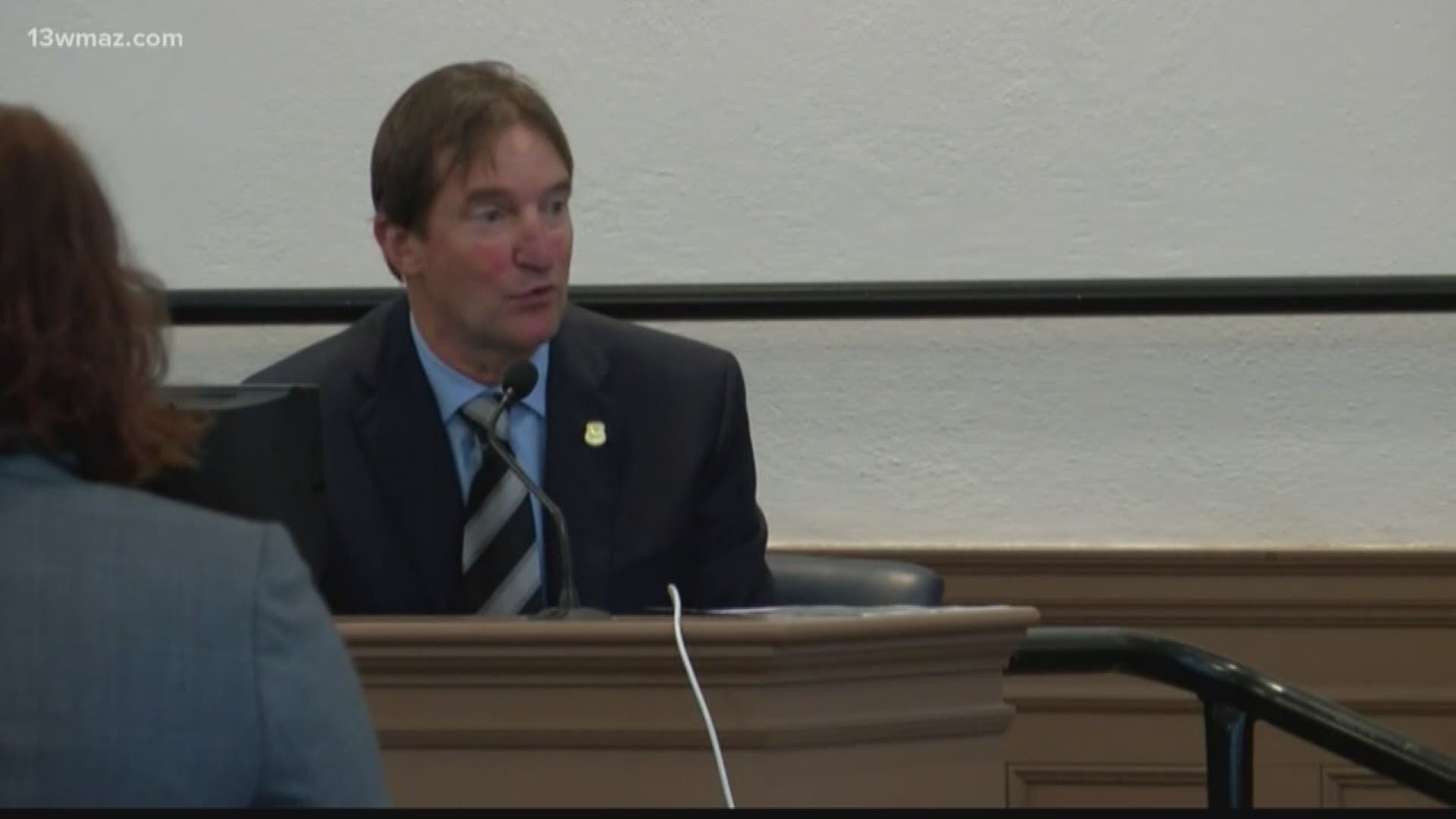 This makes 12 witnesses total that have been called by the state to come forward.

Dukes is charged with four counts in Wilcox County: two counts of making false statements, one count of hindering apprehension of a criminal and one count of concealing the death of another.

For a breakdown of the first day of trial proceedings, click here.

Court will pick back up Wednesday morning at 9 a.m.

Former GBI Special Agent Gary Rothwell was called in to testify. He said it was 'his fault' tips about Bo and Ryan weren't followed up on.

In his testimony, he said both of their names were present in a 2005 Irwin County Sheriff's Office report and in a 2008 interview to the GBI, but they weren't looked into. Rothwell said he thought it was something local police departments had already covered.

'We should've have followed up, and we did not, and that is my responsibility," Rothwell said.

Rothwell said the media coverage Grinstead's case gained caused a high volume of information, tips and possible leads to come in. They even got tips from psychics. He said they tried to look into all of the information, even though it put a strain on their resources.

When asked if there were things that happened back in 2005 that make sense now after the arrests, Rothwell answered 'absolutely.'

"It had immediate significance for us," Rothwell said.

He went on to say the glove had to be cut up to determine which parts would be best to find a fingerprint on. He said around 200 people were swabbed as a result to find a match.

This is the same glove the GBI said had Ryan's DNA on it at his bond hearing a month ago.

When asked if there seemed to be a struggle at Grinstead's home, Rothwell said the scene was ambiguous, meaning it didn't seem like it either way. He also said they couldn't determine if the blood left on the comforter was indeed blood or menstrual fluid.

GBI Special Agent Shoudel was called to the stand next. His testimony would reveal a second recorded GBI-interview in the trial.

This recording was from an interview Shoudel did with Bo on June 16, 2016 at the Rochelle Police Department in Wilcox County. This came after Shoudel spoke to Bo's army friend, McCullough over the phone.

"She was my 11th grade teacher," Bo said, in the recorded interview, when asked about Grinstead.

In the recording Dukes went on to say he does not recall the conversation with McCullough back in 2006, and says they didn't speak about burning a body or anything of that nature.

In the recording, Shoudel asks for Bo's consent to take a sample of his DNA, and Bo agreed.

The court recessed around 5 p.m., and will be back in session around 9 a.m. Wednesday.

Garland Lott was called to the stand after the recess. He said he went to high school with Bo and Ryan, and they hung out in the same friend group and at parties.

Assistant District Attorney J.D. Hart questioned Lott, and had him describe a particular party that took place at the Hudson pecan orchard two or three weeks after Grinstead went missing. Lott said there was a fire they were standing around, alcohol and 'more than likely' other substances.

Lott said a comment was made at the party when he was standing outside of a car that Bo, Ryan and possibly others were inside of. Lott said the comment was something along the lines of: 'We killed her and burned her body.'

Lott said he wasn't sure who said the statement, but was adamant on the stand that Bo and Ryan said it, and he was encouraged by others to take it to authorities.

Dukes' uncle, Randy Hudson, owner of Hudson Pecan Company and the pecan farm down near Fitzgerald, was called to testify by the state.

When the prosecution was questioning Hudson, he said around October or November 2005, Dukes would burn wood in his orchard, which upset him.

"Typical Bo... all his life he didn't listen," Hudson said on the stand.

The GBI searched for Grinstead's remains in the orchard in Ben Hill County back in February 2017.

When asked if he ever tried to cover for Dukes, Hudson said 'hell no!'

The defense did not ask him any questions.

The defense attorneys and prosecution met in a closed meeting, and the jury was ushered out for short recess around 2:45 p.m.

After lunch, two members of the Ocilla Police Department were called testify.

Chief Billy Hancock and Bill Barrs were both questioned about the crime scene at Grinstead's home back in 2005.

Defense Attorney John Fox asked Hancock if he ever received a call from a man name John McCullough, since McCullough said in his testimony he had called multiple police departments in the area trying to get someone to listen to his tip. Hancock said no, he didn't.

Jeff Roesler, who was a GBI crime scene specialist called out to Grinstead's house at the time, was also called to testify. He spoke to how a crime scene is processed by someone in his job, and the sort of things he saw at Grinstead's home the day he went.

More pictures of the crime scene were released to the jury at this time, including a picture of blood found on Grinstead's comforter.

Stephen Duke, Ryan Duke's brother, was called by the state to testify. Ryan Duke is the man accused of actually killing Grinstead.

Ryan's recently released alibi was brought up when the prosecution was questioning Stephen.

The alibi says Ryan was at home with Stephen, Dukes and Ben McMahan, who is now deceased. At some point between Oct. 22 and Oct. 23, 2005, Dukes and McMahan left the trailer. Stephen was asleep in his room, and Ryan claims he was also asleep in another area of the trailer at the time Grinstead was killed.

RELATED: Ryan Duke says he was asleep when Tara Grinstead was murdered

On the stand, Stephen said he could not confirm he, Dukes and Ryan were together at the trailer in Fitzgerald the night Grinstead disappeared.

After Stephen was finished, McCullough took the stand again. This is where the state released a recording of a phone call between McCullough and a GBI agent.

In the phone call, McCullough told the agent about the conversation he had with Dukes back in 2006, when he visited Dukes in Ocilla on Christmas break from basic training. McCullough described this conversation in detail earlier in his testimony.

The prosecution then presented McCullough with pictures of Grinstead, and at the sight of them, he began to weep.

The defense asked McCullough if Dukes was the reason he left the army, and he said what Dukes had told him about Grinstead and the frustration he wrestled with at the time contributed partly to his decision.

After McCullough's testimony, the court recessed for lunch until around 1:30 p.m.

The state called Dukes' cousin, Wes Conner to the stand to testify.

Hart questioned Conner for the prosecution, asking him about a party where Dukes was present. Conner said alcohol was at the party and people were drinking, and that Dukes 'alluded' to the fact he was involved with a certain disappearance and helped dispose of a body, but did not say who it was.

Defense Attorney John Fox questioned Conner next about Dukes' drinking habits. Conner confirmed sometimes Dukes would drink so much he couldn't recall the night before.

Hart came back to Conner, asking, 'Did you ever get so drunk you claimed you burned a dead body?' Conner said no.

On Tuesday morning, prosecution called their second witness, Grinstead's then-neighbor, Joe Portier. On the stand Portier likened Grinstead to a daughter, and said he and his wife lived next to her for a few years.

Assistant District Attorney J.D. Hart questioned Portier, as to walk him through the days of Grinstead's disappearance back in October 2005. He said he did not see Grinstead again after she did his granddaughter's hair and makeup for a beauty contest that weekend.

Portier said he saw the glove that was left 'five feet away from her porch,' which the Georgia Bureau of Investigation says contains Ryan Duke's DNA, the man accused of actually killing Grinstead.

The prosecution brought forth a few pieces of evidence, mainly pictures of Grinstead and the glove.

When the defense questioned Portier, they asked him one question: if he knew Dukes. Portier said he knew of Dukes through football, but never had a personal meeting with him.

The next witness called was John McCullough, Dukes' friend from basic training with the United States Army. District Attorney Brad Rigby questioned McCullough, walking him through when he visited Dukes in Ocilla in 2006 on Christmas break.

McCullough recalled a conversation he had with Dukes then, when they were both drunk and had cocaine. He said Dukes had basically told him he helped burn Grinstead's body in Hudson Pecan Company's pecan orchard.

"It was just tough to deal with that,"  McCullough said, on the stand.

He admitted he didn't report the conversation until around February 2007. McCullough said he tried to get the information out and spoke to the Fitzgerald Police Department, but no one got back to him. McCullough said some departments he reached out to even laughed at his tip.

McCullough said he finally got to speak with the GBI in 2016 and told them about the conversation. He said some previous comments Dukes made about pecan wood burning hot made more sense.

The second day for trial proceedings started Tuesday morning in Wilcox County Superior Court for the man accused of concealing Tara Grinstead's body over a decade ago.

Grinstead was the south Georgia beauty queen and teacher who went missing from her home in Ocilla in Irwin County in October 2005.

Dukes is charged with four counts in Wilcox County: two counts of making false statements, one count of hindering apprehension of a criminal and one count of concealing the death of another.

On Monday, the court was able to select a jury of five men and seven women, as well as three alternates. Both sides were able to deliver their opening statements, and the first witness was questioned.

Click here for a breakdown of what happened in Dukes' trial on Monday.

This is a developing story, stick with 13WMAZ for updates.