The McNair family started Monday like many, playing in the snow. It was a fun, memorable day, until a pipe burst, pushing them out of their home. 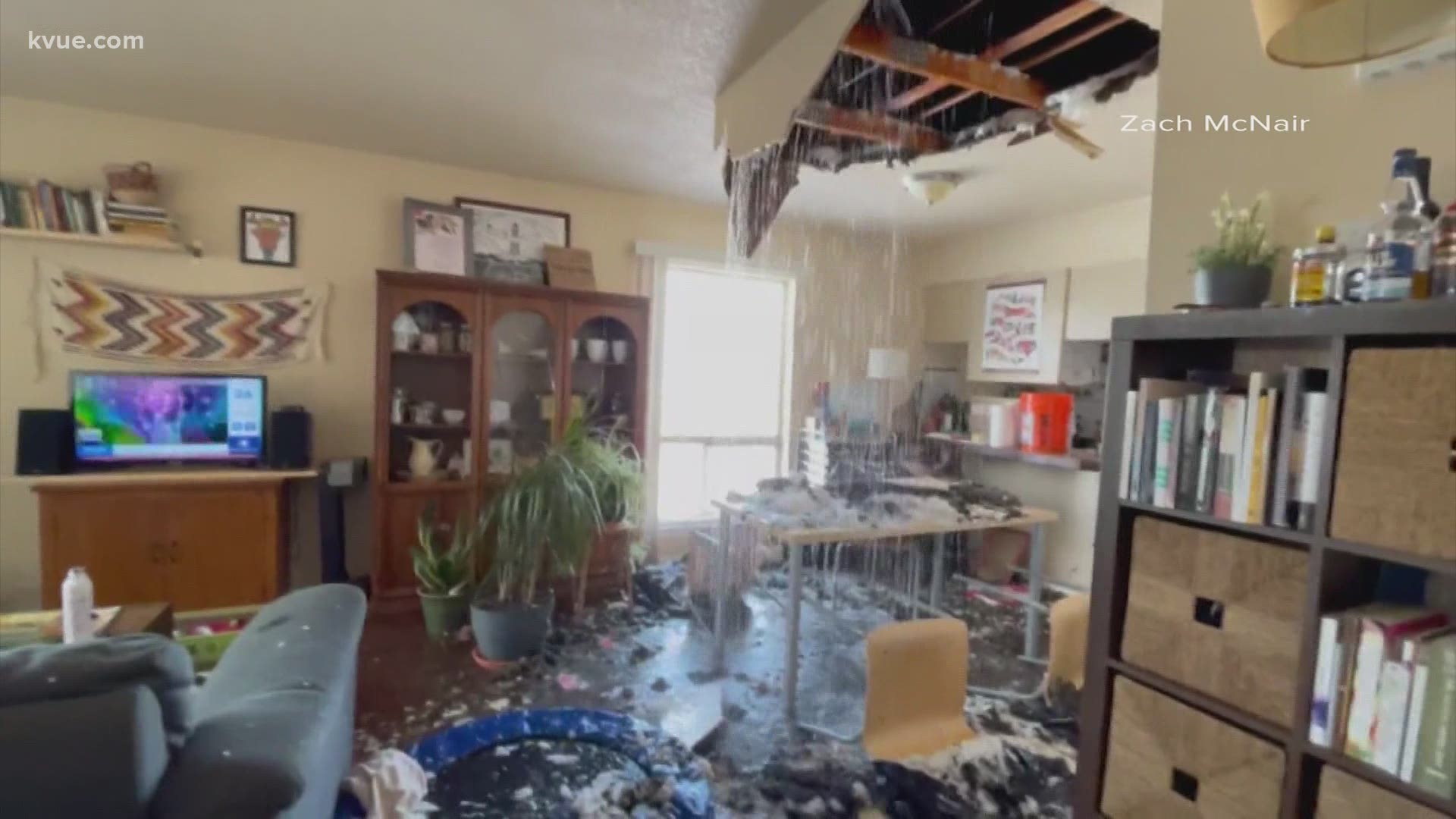 AUSTIN, Texas — Monday was met with snow in Central Texas and that meant a day of fun for the McNair family.

The family of four spent the morning playing in the snow, before heading inside for a little break.

"We hear water pumping through the pipes and whatnot and then Jonas goes, 'Hey, it's leaking in the kitchen,'" said Zach McNair, dad to 6-year-old Jonas and 8-year-old Conlin.

McNair said, at that point things became a blur, while he said his wife, Candice, grabbed Jonas as the ceiling caved in.

"It all happened so fast. And due to the just the sheer amount of water that was poured out of, the living room caved in as well. And so basically everything from the living, kitchen and dining area is more or less lost," said McNair.

He said a pipe burst in their ceiling, causing damage in most of their apartment.

Unfortunately, this hasn't been rare for Central Texas. Plumbers said more pipe problems are expected to happen as things thaw out and people may realize damage has been done.

KVUE spoke with a plumber on Thursday, who said to know where your shut off valves are, so if you have a leak or a flood you can shut off the water quickly.

If you run into this problem, here's some advice from State Farm when it comes to insurance:

Gov. Greg Abbott and the Texas Division of Emergency Management are encouraging Texans to complete the Self Reporting Damage Survey to help the State identify damages across Texas and help emergency management officials gain an understanding of damages that occurred during the recent winter weather. This data is also needed to provide information to FEMA and highlight the need for federal disaster assistance for individuals.

The voluntary survey, available in both English and Spanish, can be accessed by visiting: www.TDEM.texas.gov/warm. Reporting damage to the Texas Division of Emergency Management is a voluntary activity, is not a substitute for reporting damage to an insurance agency and does not guarantee disaster relief assistance.

As for the McNair family, they're staying in a new place for now and staying positive.

"As difficult as it has been to be displaced, it has been just really beautiful to be able to just have this collective moment together as a family, being like, 'Hey, this is tough, but we're still OK. We're in this together.'"

2 women dressed up as 'grannies' to get COVID-19 vaccine, Florida health official says