The old Plaster home and its place in Atlanta's history

It was easy to miss the stairs and the historic marker commemorating Gold Tooth John, handyman for the Plaster family on Piedmont Circle in Midtown. 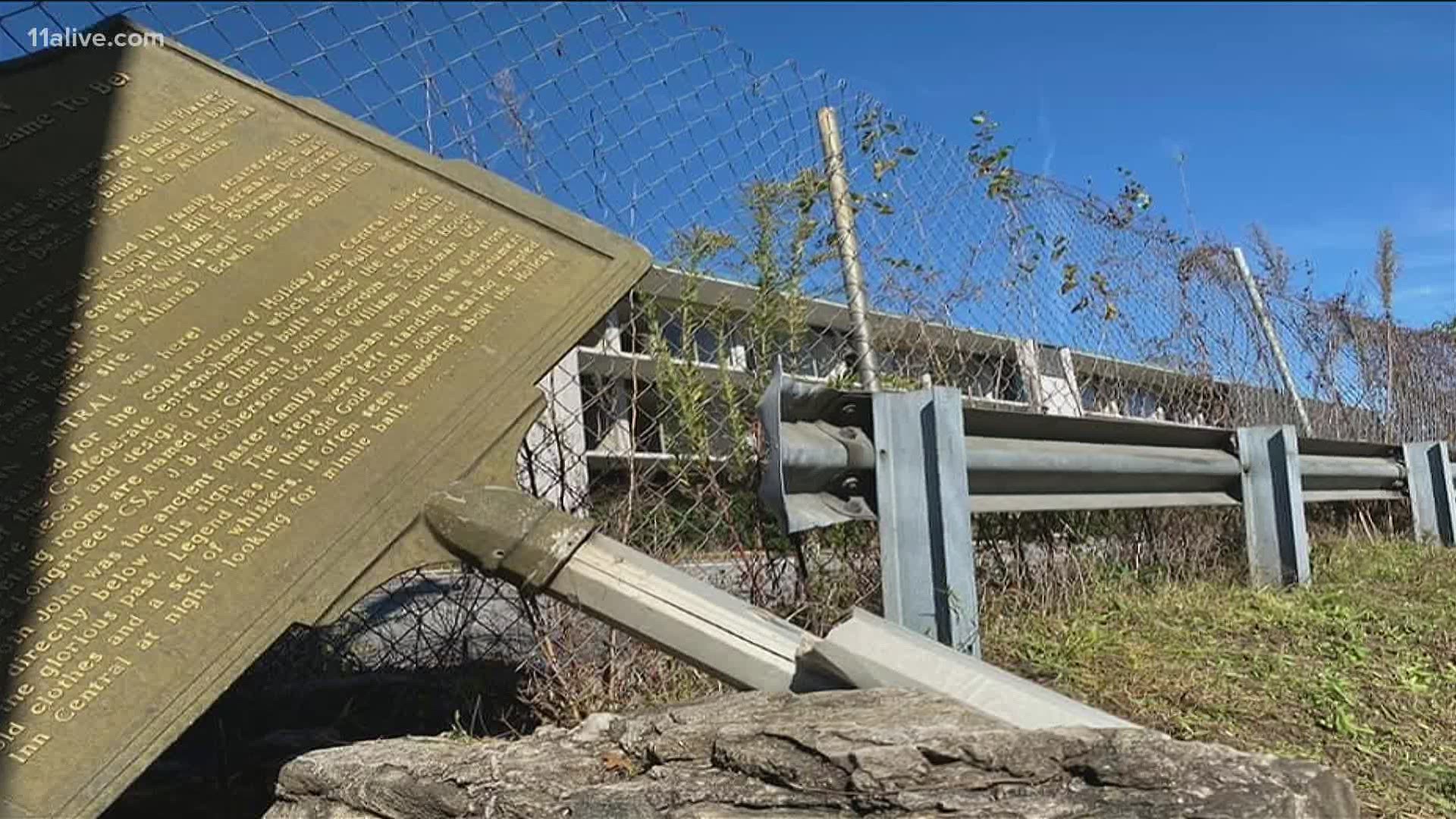 ATLANTA — On Saturday, the Piedmont Heights Civic Association rallied to clean a historic area surrounding a piece of property in Midtown Atlanta that many people have come to know as an eyesore.

The now-abandoned Midtown Suites Motel off of Buford Highway at Monroe Drive and Piedmont Circle is seen only for the flophouse that it had become over the latest years of its existence.

On the front of the property, a BP Service Station abuts the property.  Many people who pass the property daily are not aware of its earlier history as a Holiday Inn - a way station along the early Interstate 85 rolling out of Atlanta. And even fewer are familiar with its more historic significance.

"It is a huge eyesore," Bob Glascock said of the abandoned motel.

To one side of the motel's property, abutting Piedmont Circle, is a set of stone stairs that, until only recently, had a historic marker standing adjacent to it. The stairs originally led to a historic home that once stood on the site that played an important role in the development of the city of Atlanta.

And with some sorrow, Glascock, president of the Piedmont Heights Civic Association noted that the historic marker had been knocked over.

On Saturday, 11Alive's Jeff Hullinger said there was optimism just a few years ago about potential redevelopment on the site, but a change in the property's ownership has led to uncertainty, decay, vagrancy, and crime.

The property played a very important role in the history of the city of Atlanta, as Jeff explained in detail in October.

When David Gilpin Seibert died in July, Atlanta lost an intellectual, a historian, a man with an insatiable appetite for knowledge, and a true Southern character.

Mr. Seibert traveled extensively throughout our state, documenting and photographing the over 3,500 historical markers for the state's Digital Library of Georgia and publishing an annually updated listing for reference.

In 2013, he published Georgia Scenes, a book of photography of lesser-known early homes and historical sites in Georgia, and was working on a second book before his death.

Among his favorite projects: the Atlanta historical marker commemorating Gold Tooth John, the handyman for the Edwin Plaster family. Edwin’s father, Benjamin, and his family were some of Midtown Atlanta’s first settlers in 1822.

The home was located on Piedmont Circle and Monroe Drive, behind a BP service station, and adjacent to the now-abandoned Intown Suites Motel.

It is believed Gold Tooth John built the steps, the site’s only remaining relic of the Plaster home and defensive entrenchments from the Battle of Atlanta during the Civil War.

Mr. Seibert wrote: “Edwin Plaster went off to war. He returned to find his family scattered, his home burned, his fields devastated. This was wrought by Bill (General William T. Sherman) Sherman.”

The sign, through humor, illustrated the history of the steps.

"Recently, when filling my SUV at the Midtown BP, I couldn't see the steps or the marker," Jeff said. "This local artifact was hidden by weeds, trash, and a homeless shopping cart. The sign was destroyed and buried in the dirt."

The former flop-house motel was once a Holiday Inn -- now, it's just a fenced-off property, across from Stacey's Pharmacy and Mama's Tacos on Piedmont Circle. Piedmont Circle connects Monroe Drive to Piedmont Road.

Piedmont Road was originally known as Plaster Road, and it intersected with Midtown's other famous family -- the Cheshires -- as in Cheshire Bridge Road.

About a thousand yards from where the two roads -- Cheshire Bridge Road and Piedmont Road -- meet, members of the Plaster and Cheshire families are buried in the same cemetery, Rock Spring Presbyterian, about 50 feet from each other. All of them are facing, you guessed it, Piedmont Road.

The Plaster home, situated above the present-day Midtown BP Station, was large and anchored an enormous tract of land for crops.

Without the Plasters and the Cheshires, Midtown would look very different in 2020.

Mr. Seibert understood the meaning of these ancient steps in telling the story of Atlanta. He used this saga in his civic speeches around town.

David Seibert was a busy man.

The former New Orleans resident spent 28 years with IBM. He was a piano virtuoso, played an assortment of musical instruments, and was one of the country’s foremost experts on the history of Ferrari.

He created and managed two racing series for Ferrari North America, and had been the creator and administrator of the Cavallino Classic Competition, an annual racing event for historic Ferraris in Palm Beach, Florida. As a driver, he won five consecutive SCCA Divisional Rally championships.

Mr. Seibert was a former President and Chairman of the American Lung Association of Georgia. In 1991, he had an experimental double lung transplant and was one of the longest-lived survivors of that operation.

David Seibert had an extraordinary life.

One of his favorite Atlanta finds and projects was the steps of Gold Tooth John.

Now, like many other historical sites of meaning, those steps are at risk to unfettered development and redevelopment.

There are at least eight other markers within 2 miles of this one, but none are near a strip club, a fire station, a bowling alley, a BP, and a local television station.

Bob Glascock said that his group -- the Piedmont Heights Civic Association has been met with silence from the property's current owner, Paces Properties, and from the city of Atlanta.

If you want to help, contact Jennifer Ohme at discover@PIHIAlliance.com.

Photos: Cleaning up a piece of Atlanta's history