As Halloween approaches, local law enforcement officers and sex offenders are preparing a night of ramped up surveillance. But one group argues it's a waste of time and taxpayer money. 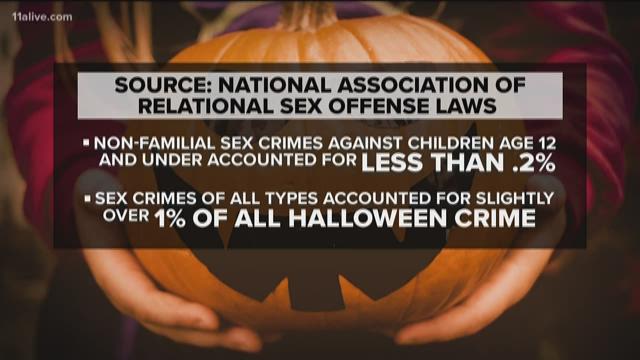 ATLANTA -- Halloween is when children of all ages don their costumes for a fun night of trick-or-treating. For registered sex offenders, it's a night of ramped up surveillance by local law enforcement officials.

According to 2013 guidance from the Georgia Pardon and Parole Board, Georgia sex offenders under parole must adhere to a curfew or attend programming on Halloween. They are also subject to residence checks, and in some areas of the state, sex offenders must even report to a facility and remain there during trick-or-treating hours.

But there's one group who argues that that ramp-up is a waste of taxpayer money and it could be spent on things that pose a bigger threat to children on Halloween night, like traffic safety.

The National Association for Rational Sexual Offense Laws, or NARSOL, is a group that says it advocates for laws and policies that promote public safety while "safeguarding civil liberties" of those registered as sex offenders.

11Alive's Chris Hopper spoke to Barbara Gale, the spokesperson for Georgia's chapter of NARSOL, who called the extra monitoring on Halloween a waste of time and money.

"If you check the statistics, it's one of the lowest recidivism rates of any crime," Gale said. "We're just misspending our money. We should be concentrating where the true fear should be and not continuing to harass people who are being harassed enough."

The group pointed to statistics from a 2009 study that looked at kids' safety while trick-or-treating that showed sex crimes of all types accounted for about 1 percent of Halloween crime. Sex crimes outside the family, against children 12 and under, on Halloween accounted for less than .2 percent.

And, according to the study, CDC data suggests children age 5 to 14 are four times more likely to be killed in a pedestrian accident on Halloween than any other day of the year.

But parents 11Alive spoke to said they still want to know whose homes their kids are going Halloween night, and any other night.

"I think in general it's important to know where sex offenders live, whether trick or treating or not," said Kimberly Jackson. "I think it's very important just for the safety of the children and the awareness of the community to be aware of where there is a potential danger for our children."

Data on where where sex offenders live is available at the Georgia Bureau of Investigation website. Parents can enter their address or zip code and the site will generate a list of offenders in the area.