11Alive will be monitoring the president's visit closely and will update this story as the day goes on. 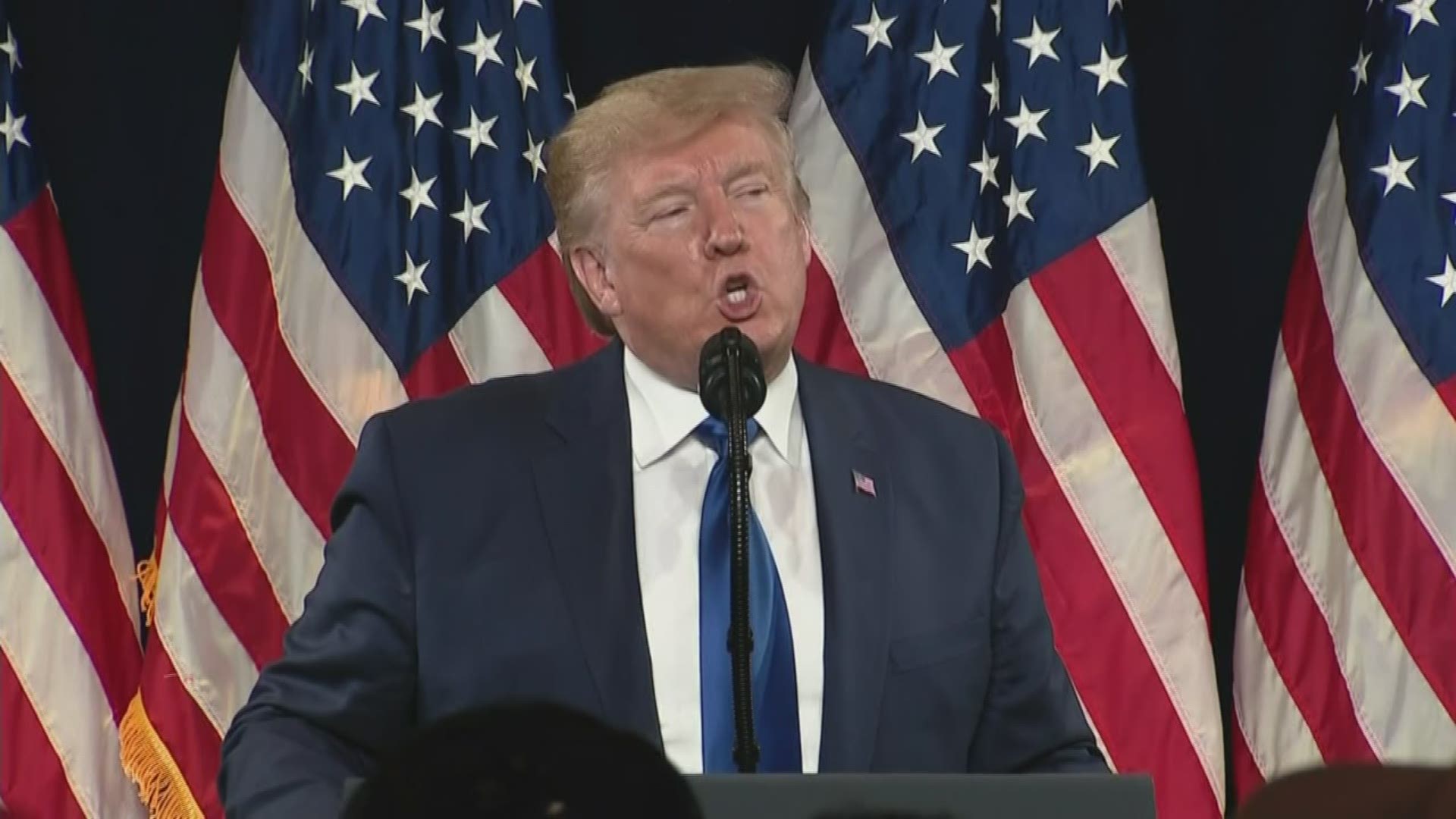 The president will be in Atlanta on Friday to launch a new "Black Voices for Trump" coalition and attend a fundraiser. Vice President Mike Pence will also make an appearance with President Trump.

Roadblocks will be in place and protests against the president's visit are expected, setting the stage for a likely commuting nightmare for Friday afternoon traffic.

RELATED: President Trump in Atlanta: Everything you need to know

11Alive will be monitoring the president's visit closely and will update this story as the day goes on.

4:25 PM | Traffic expected to be extremely heavy as road closures and delays occur between downtown Atlanta and Dobbins Air Reserve Base in Marietta where the President will depart on Air Force One. Follow HERE for traffic maps.

4:17 PM | Trump thanks everyone and ends his speech.

4:15 PM | Trump urging those in attendance to get involved, join the Republican Party and continue to move forward.Says "the best is yet to come."

3:53 PM | Trump says he is attending the Alabama - LSU game tomorrow in Tuscaloosa and throws a bit of a jab at UGA asking "So what happened to Georgia?"

3:52 PM | Introduces an Alabama man, war veteran, who is opening a concrete plant in his state, to speak.

3:50 PM | Talks about the end of the Paris Agreement and how, instead, he wants to invest in black communities. Crowd erupts in "Four more years!" chants.

3:44 PM | After speaking about job numbers, President Trump introduces two Atlanta residents who own a general contracting business to speak.

3:26 PM | Introduces leaders of the "Black Voices for Trump" coalition, including Pastor Darrell Scott, who he invited to the stage.

3:20 PM | Crowd chanting "Four more years" and "Blacks for Trump" and says there was a big crowd outside the room that couldn't fit in the rally.

Credit: AP
Supporters of President Donald Trump cheer as he arrives to speak during the launch of "Black Voices for Trump," at the Georgia World Congress Center, Friday, Nov. 8, 2019, in Atlanta. (AP Photo/ Evan Vucci)

3:18 PM | The president is now taking to the stage to address the audience.

3:12 PM | Dr. Ben Carson is speaking before he introduces the president.

3:10 PM | The vice president has finished his remarks, and the crowd is now waiting for President Trump.

2:35 PM | The president has left The Whitley hotel in Buckhead and is en route to the Georgia World Congress Center.

2:30 PM | 11Alive's Doug Richards provides some photos from the scene at the Georgia World Congress Center, where the president is expected to leave for from Buckhead shortly.

2:05 PM | A motorcade was seen arriving near the Georgia World Congress Center. President Trump has not left Buckhead yet, but Vice President Pence is expected at the afternoon event.

1:50 PM | Here are some photos of the president's visit to Atlanta so far:

1:05 PM | Trump is now meeting with supporters at a luncheon and roundtable at The Whitley hotel in Buckhead. Invitations to donors for the event showed it cost $2,800 to attend, with photo opportunities for $35,000 and a seat at the roundtable for face-to-face time with the president for $100,000.

The president is next slated to speak at the "Black Voices for Trump" Coalition launch at the Georgia World Congress Center in Downtown at 3 p.m.

1:00 PM | Our photojournalists have seen both protesters holding signs with phrases such as "Trump Traitor" and supporters with huge American flags and pro-Trump signs in the area around the hotel.

12:55 PM | President Trump is now inside The Whitley hotel in Buckhead for the fundraiser.

12:50 PM | The president's motorcade was just seen arriving in Buckhead.

12:45 PM | Black SUVs can be seen already arriving in Buckhead at the hotel where Trump is attending a fundraiser.

12:40 PM | The president's motorcade just appeared to pass by SunTrust Park on I-75 South, and look to be continuing down I-75 toward the Downtown Connector.

12:35 PM | Trump is now en route to Buckhead, where he is attending a fundraising luncheon that will support his campaign, Georgia Sen. David Perdue's reelection campaign, and the Republican National Committee.

12:20 PM | The president has not yet stepped off AIr Force One, but he has tweeted:

12:10 PM | Air Force one is on the ground at Dobbins Air Reserve Base.

12:05 PM | Air Force One is over Buckhead, as seen in this picture sent along by 11Alive photojournalist Dan Reilly:

12:00 PM | One of Trump's most vocal black supporters, Pastor Darrell Scott, is aboard Force One traveling to Atlanta with the president.

11:40 AM | Though the president's arrival has been delayed, road closures around his Buckhead fundraising destination should soon begin as planned.

Daniel Macaluso also sends along this photo of supporters waiting to greet Trump at Dobbins:

11:05 AM | 11Alive photojournalist Daniel Macaluso, who is at Dobbins to film the president's arrival, reports Trump's new ETA is 12:10 p.m.

10:50 AM | The president was set to arrive at Dobbins Air Reserve Base at 11:40 a.m., but they took off about 40 minutes behind schedule, so we'll see how that affects his planned arrival.

10:35 AM | Marine One has landed and President Trump is on the ground at Joint Base Andrews. He will depart shortly for Atlanta.

10:00 AM | President Trump is expected to arrive aboard Air Force One at Dobbins Air Reserve Base in about two hours, at 11:40 this morning.

The presidential plane is currently waiting at Joint Base Andrews to bring the president to Atlanta. 11Alive has a stream available of his departure.

9:45 AM | Incidentally, today marks three years to the day since Trump won the 2016 election.

3:38 PM | Due to President Trump’s visit on Friday, rail service at Lindbergh, Arts Center, Buckhead, and Medical Center will be impacted at approximately noon and 4 p.m., for 10 to 15 minutes as the presidential motorcade arrives and departs from events in the city.