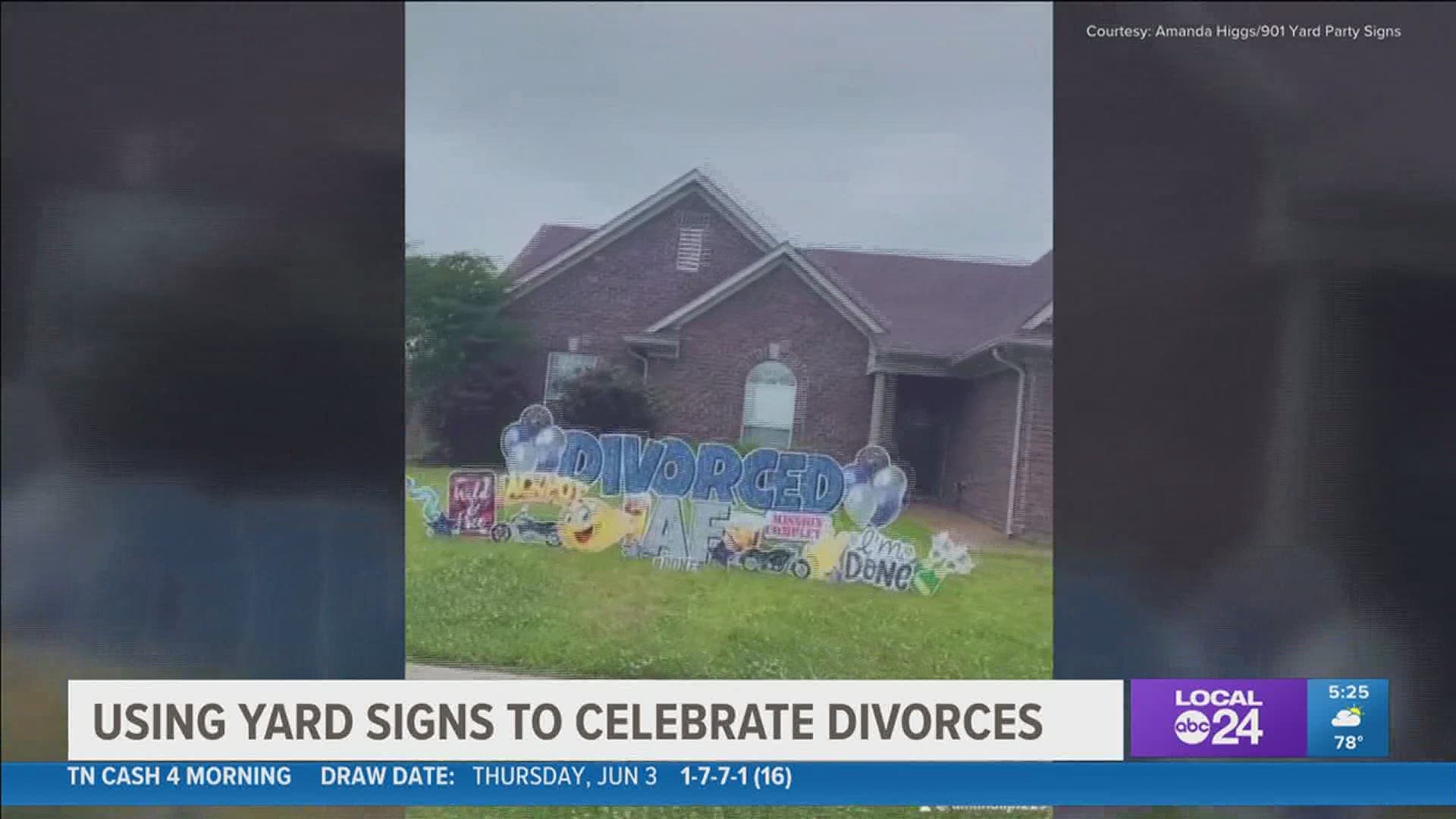 MEMPHIS, Tenn. — Decorative yard signs became very popular during the pandemic especially with people looking to find ways to celebrate milestones while social distancing. A new trend in yard signs has not one, but two yards in the Memphis-area going viral for their divorces.

Amanda Higgs started 901 Yard Party Signs early on in the pandemic and while the pandemic has started to let up, business hasn't.

“It’s not an average thing to put in someone’s yard but it’s really become a thing," Higgs hints.

*Queue Taylor Swift's "We Are Never Ever Getting Back Together"*

That's the song that accompanies a Tik Tok video Higgs recorded of a sign she has never been requested to put up before: "Divorced AF". Friends of a recent divorcee ordered it up as a surprise.

“His buddies called me and they were like, 'he’s going through a long divorce and we just want to make him laugh about it,' lighten it up because divorces are hard," Higgs said. "They’re not fun.”

It didn't take long for it to go viral at all viewed tens of thousands of times on Tik Tik and even more once Tosh.0 shared it on Facebook. Even a local divorce attorney has started to use it as an advertisement.

“It went crazy and I never expected it to but I think people are looking to laugh because this last year hasn’t been laughable," Higg said.

Just before that, another Memphis-area divorcee was going viral for their yard decorated divorced celebration.

“I think it was April the 6th, where he reached out and requested it," Devon Phillips said. "It was again, ok this is a first, but we’re here for the challenge. Never did I expect that type of reception.”

Phillips also started a yard sign decorating business during the business called HIJK'ed Yard Greetings. She said they're in the business of celebrating life and milestones, no matter the occasion.

"If you want us to come in and hijack your yard because you’re celebrating the end of this chapter of your life then we’re here for it, we’re here to help you that’s our job and that’s how we looked at it," she said.

Phillips was sitting in church when traffic to her website was peaking. She thought it was spam until she realized the client, Marcus Thomas, had snapped a picture of the divorce display she put in his yard. It bled up on social media shared and picked up by vloggers.

“Honestly, it was a shocker," Thomas said. "I didn’t really think it was going to do that."

Thomas said he wanted to put up the display not out of spite but out of celebrating starting over.

“I feel like if you’re breaking a bad bond, you should celebrate it. You’re starting your life over," he said. “It was just a celebration for me, myself."

“I don’t think it’s celebrating divorce as is it’s just trying to loosen the mood after going through something so strenuous," Higgs said.