Undercover video released by the Humane Society of the United States shows chickens at a Georgia farm being abused. 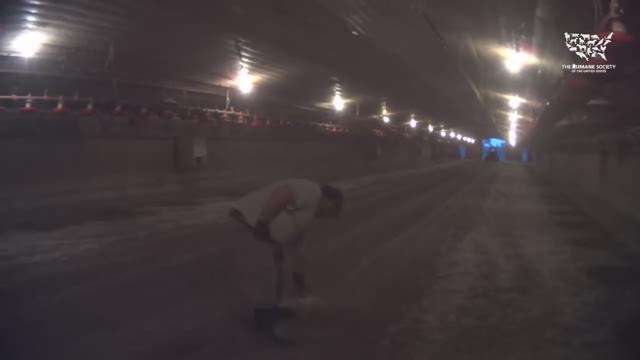 Undercover video released by the Humane Society of the United States shows chickens at a Georgia farm being abused.

The alleged abuse happened at a Pilgrim's Pride contract farm in Hull, Ga. and slaughterhouse in Mt. Pleasant, Texas.

An investigator with the Humane Society of the United States (HSUS) was employed at both locations and captured the inhumane treatment on video.

"…the investigator was only there for 4 days of work and he was just a barn helper. He picked up dead chickens in the morning and dumped them in the dead pit, made sure water was working etc," said the investigation team’s senior director.

The HSUS said the farm's owner was captured on video repeatedly beating animals with a metal rod. The video also captured sick and injured chickens having their necks twisted in an attempt to kill them. The investigator also saw other birds being grabbed by their throats and thrown in the air at both locations.

Pilgrim's Pride is the nation's second largest chicken producer in the United States processing more than 34 million bird per week, according to its website.

It's released a statement:

"Pilgrim's has conducted an investigation of the allegations at a contract farm in Hull, Georgia, and as a result, has immediately taken steps to suspend the delivery of birds to the farm and provide proper notice of contract termination to the grower.

"Our investigation determined that the actions on the farm were in direct conflict with the animal welfare training provided by Pilgrim's to the farm owner and in violation of the Pilgrim's Animal Welfare Program.

"Ensuring the well-being of the chickens under our care is an uncompromising commitment at Pilgrim's. This isolated incident of unacceptable behavior does not reflect our approach to animal welfare or the approach of the more than 4,000 family farm partners who interact with our chickens daily.

"Pilgrim's will not tolerate animal abuse. We regret these actions have taken place and are immediately taking steps to reinforce our commitment to animal welfare throughout our supply chain and in our production processes."

Captain Jimmy Patton with the Madison County Sheriff's Department said it received the video from the HSUS and has forwarded the information to the District Attorney's Office and Department of Agriculture for review.

However, the Department of Agriculture's Communication's Director said although it is aware of the video, the matter is out of its jurisdiction and should be handled by the Sheriff's Office, District Attorney and the GA Poultry Federation.

11Alive has reached out to the Northern Judicial Circuit District Attorney's Office of Madison County for comment but has not heard back.

Check back for updates on this story as more as more information becomes available.

1 / 8
Stills from video taken by undercover investigator while working for Pilgrim's Pride in Georgia and Texas in May 2017. Farm Animals; Investigations