Cities and communities will honor all of the men and women who have served in the military. 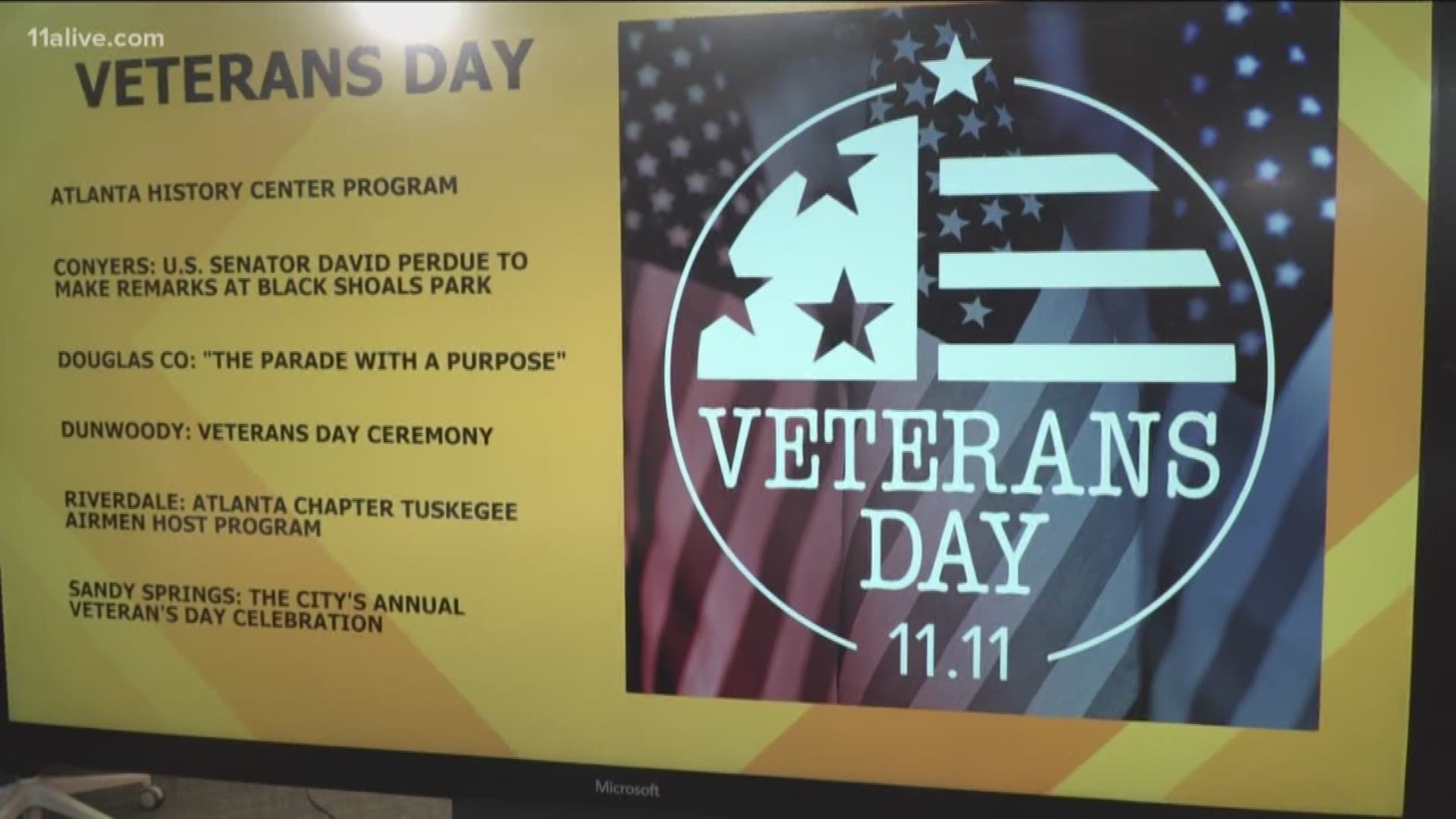 ATLANTA — Every year on Veteran's Day, we take a moment to pause to honor those who have sacrificed in service to their country.

It also coincides with the commemoration of Armistice Day, which marks the anniversary to the end of World War I, in which the Armistice with Germany went into effect during the 11th hour of the 11th day of the 11th month of 1918.

This year, local cities and communities will honor all of the men and women who have served in the military. Below is a list of events that the public can attend to participate:

The Atlanta History Center program will honor veterans past and present and will feature a keynote on pioneering women in Naval aviation.

U.S. Senator David Perdue and five elected officials are expected to make remarks at the Veterans Day ceremony Monday at the Walk of Heroes Veterans War Memorial at Black Shoals Park in Conyers.

The Veterans Day ceremony will include a 21-second "Moment of Silence" for the Unknown Soldier, the presentation of the colors by the Georgia National Guard Youth ChalleNGe Program from Ft. Gordon in Augusta, a medley of service songs, a special presentation by Walk of Heroes President Tommy Clack, Taps played by Newton County High School Band Director Jason Smith and a flag retirement ceremony by the Boy Scouts of America Yellow River District.

The annual Douglas County Veterans Day Lighted Parade, titled "The Parade with a Purpose," will make its way again through Douglasville to honor all local veterans, active military and reserves on the night of Veterans Day.

This traditional parade presents the opportunity for Douglas County residents to say "thank you" to those who have obtained, preserved and continue to protect our freedoms.

All parade units "light themselves up" for the night parade even though it proceeds along lit streets. The parade steps off at 7 p.m. from Douglas County High School; proceeds north on Campbellton Street; west on Church Street; and then south on Bowden, Woodrow and Campbellton streets back to the high school. A performance area for bands and drill teams has been designated on Campbellton Street between Spring and Church streets.

RELATED: They fought for American lives. Now, they’re fighting to reclaim their own

The City of Dunwoody will hold its annual Veterans Day Ceremony at the Brook Run Park Veterans Memorial. The public ceremony is co-hosted by the Dunwoody Veteran Events Planning Committee and Dunwoody Parks and Recreation.

The Atlanta Chapter Tuskegee Airmen, Inc. and the Most Worshipful Prince Hall Grand Lodge will host their Annual Veterans Day Program. The guest speaker for Monday's event will be former Minority Leader of the Georgia House of Representatives, Stacey Abrams.

This ceremony will honor veterans of the Vietnam War for their heroic service and pay tribute to their selfless contributions. Participating veterans will be honored with a commemorative lapel pin and certificate of special recognition

Note: This list is not comprehensive. To submit an event for this story, email news@11alive.com.

Caged in Cruelty: Unlocking the door to reform