The Polk County manager said county received a letter from the Georgia Firefighters' Pension Fund that showed the department submitted false information to the fund. 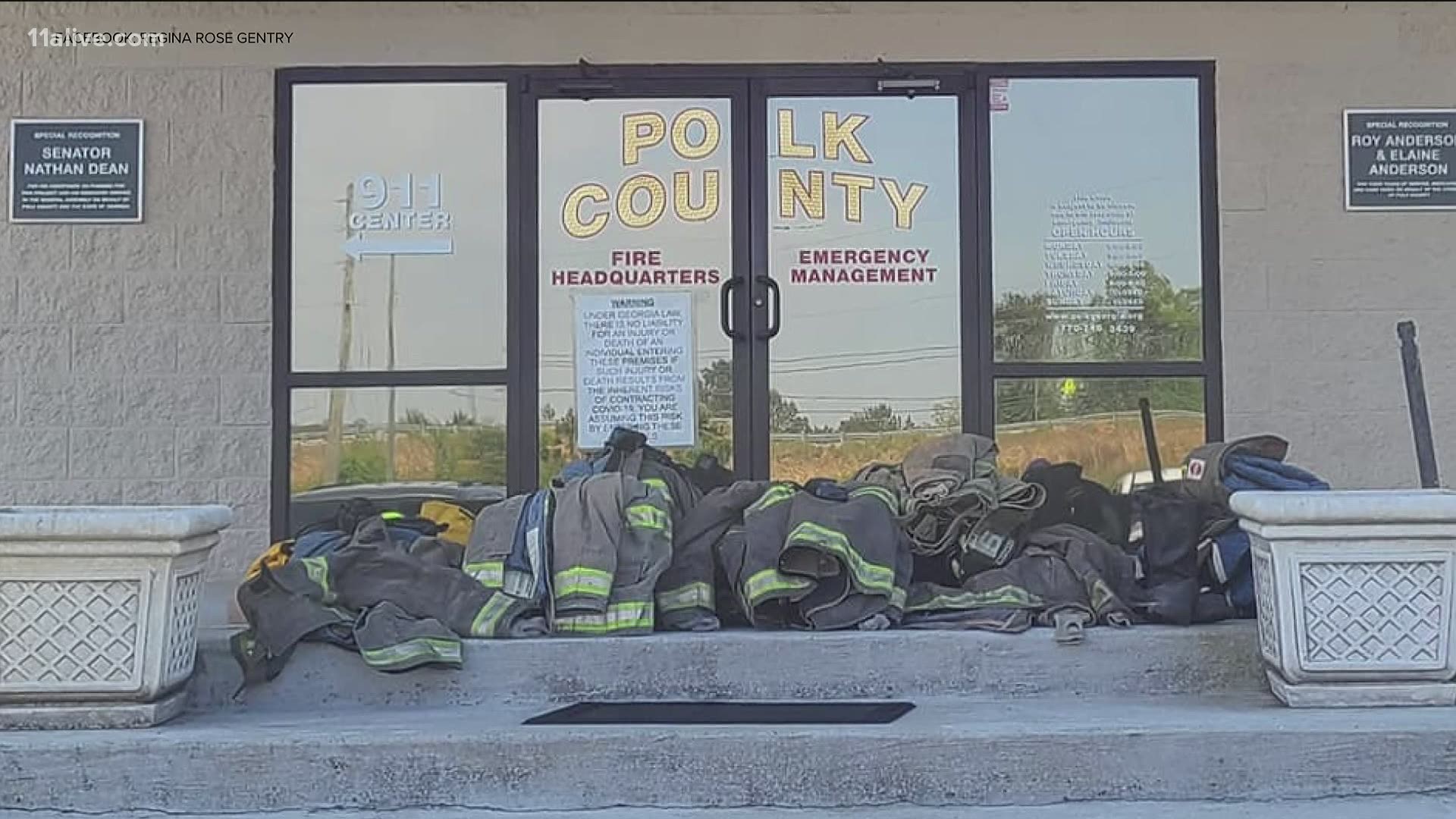 POLK COUNTY, Ga. — A group of volunteer firefighters is off the ladder and standing tall behind its chief. Now, firefighter gear is sitting on the steps of the Polk County Fire Headquarters.

Decades of service are in one photograph. For some volunteer firefighters there, Tuesday was the end of that service -- unless things change -- according to some of them who spoke anonymously to 11Alive.

Christopher Wallace has been a firefighter since 2006. He's a Polk County resident who has volunteered on-and-off for the fire department there.

"I think I saw 10 guys turn their gear in today," he said during an interview on Tuesday. "That's a real worry of mine. Before those guys turned in their gear, it was nice to get a half dozen people to show up for a fire."

As a Facebook post shows, the firefighters did so to stand with Randy Lacey, who was fired a the Polk County fire chief.

According to county manager Matt Denton, the county received a letter from the Georgia Firefighters' Pension Fund that showed the department submitted false information to the fund. 11Alive has submitted an open records request for that letter.

While Wallace does not know the details as to why Lacey was fired, he said the county should be concerned as the firefighters from the small department continue to lay down their gear.

"The fire department has probably dwindled to about 80 percent or 90 percent of what it used to be," he said. "It's gotten worse. I know a lot of times here in the county, especially during the weekday, from the 9 to 5 working hours, they actually have to dispatch all nine stations to get people to show up because people just don't have the ability to do this anymore."

Many of those firefighters tell 11Alive anonymously that they quit, unless Lacey is able to return.

They say years ago, about 200 volunteer firefighters made up nine fire stations in the county. Now, they say, that number is closer to 75 and continues to go down as firefighters decide to quit.

"[The county chooses] to hope that Rockmart and Cedartown continue picking up the slack but those two cities are responsible for picking up their citizens," he added. "It's a blessing that those cities are willing to help us out but it's coming to a point where the county is going to have to stand up on its two legs or close the door."

The Cedartown Fire Department, which has about 22 firefighters, told 11Alive that it has worked with the Polk County Fire Department before and will continue to do so to help during emergencies.