The cell phone videos appear to show an inmate describing the current conditions of the prison in a series of videos. 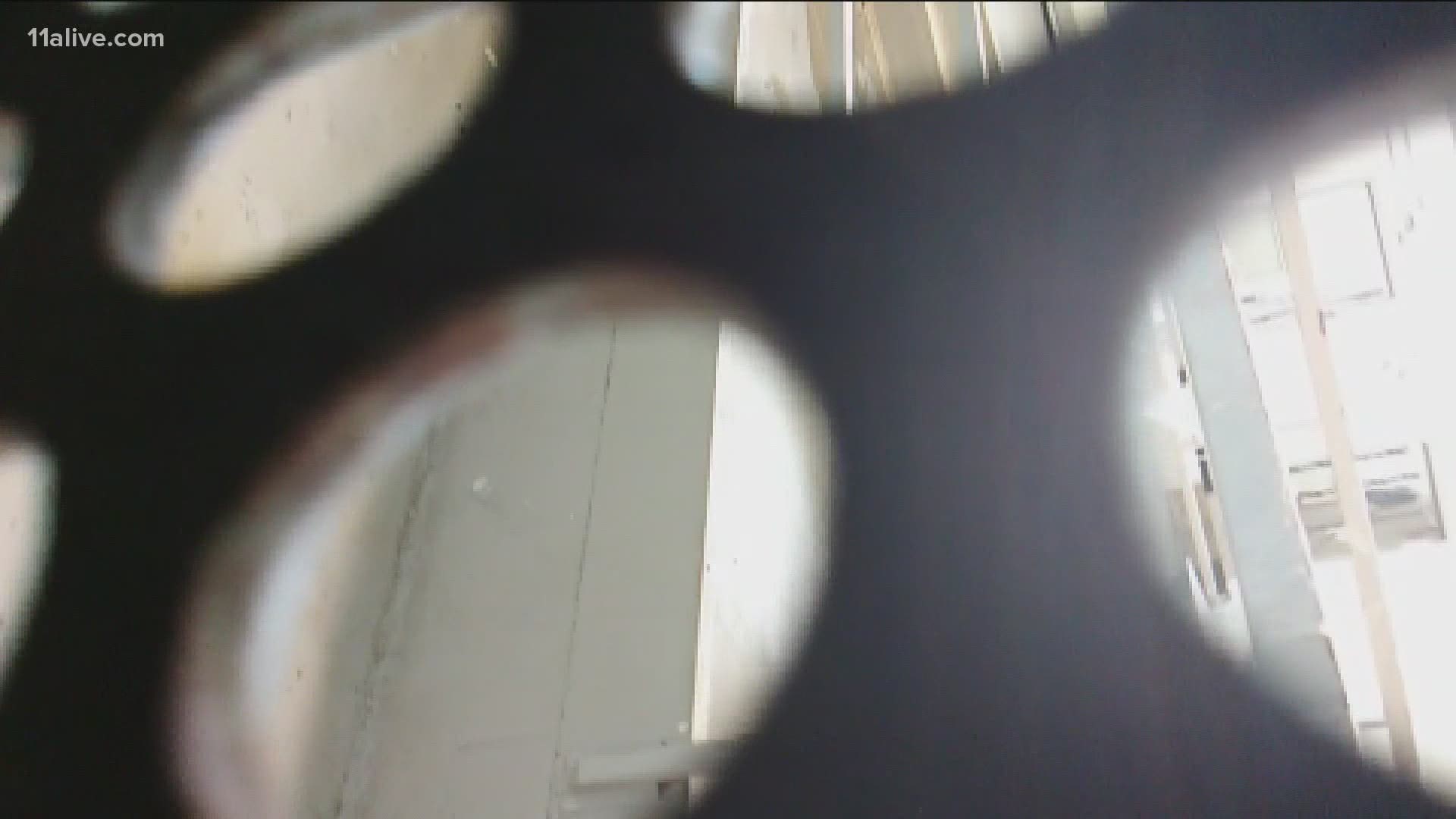 WAYCROSS, Ga. — New videos sent to 11Alive appear to show a lack of running water and power inside Ware State Prison, just days after a violent attack inside the facility.

The cell phone videos appear to show an inmate describing the current conditions of the prison in a series of videos. One video starts with the inmate saying the date, August 4, and the time while zooming in on a clock across from the inmate’s cell.

The video goes on to show the toilet not flushing, the sink not working, and the panic button, used to call for help, not setting off any alarm.

The inmate claimed he and others in the prison have little or no access to water, showers, and proper food.

“We get one scoop of ice a day, if that. The reason we riot, the reason the riot popped, health issues,” said the inmate while holding up what appears to be a cheese sandwich. “They leaving us in the room locked in. That’s why officers were injured. They refused to give us water and food and it’s been like this for almost two weeks.

In a second video, several people appear to scream for electricity.

“No response, we haven’t gotten no response. You got dudes beatin’ on doors, asking for power,” the inmate claimed.

The new videos and allegations come after the prison was placed on lockdown because of a violent assault on August .

However, cell phone video shot by Roderick Lawson, an inmate inside the prison, showed at least two men had been shot, one man in the side and a second man in the forehead, leg and chin. For the majority of the video, two apparently injured men can be seen on a concrete floor, with blood-soaked, makeshift bandages tied around their wounds.

As Lawson describes the injuries, he claimed the men that had been injured were shot with what looked like a shotgun. In total, two staff members and three inmates were injured.

A mother of an inmate currently inside Ware State told 11Alive, her son called her and described the commotion inside the prison.

“He called me and these were his exact words, he was like, 'momma I love you.' He says, and excuse my language, ‘momma, they going [expletive] crazy in here, it look like a movie in here,'” the mom told 11Alive. “They going around stabbing people, they breaking books.”

The mom, who asked to remain anonymous, said she found out about the attack on Facebook and has not heard from her son or the Department of Corrections since the lockdown began.

The mother said she hopes the department does something to help staff and improve conditions inside the prison.

“Because at the end of the day, they’re still human. That puts the workers in danger because of what’s going on with the inmates. And it’s not fair to either one of them.”

1 / 5
Provided
Video from an inmate at the Ware State Prison in Georgia shows no electricity, running water, and little food.

The mother showed 11Alive text messages from other conversations with mothers of inmates, making similar claims. In addition, 11Alive received an email from a viewer, making additional claims about sanitary conditions.

“They are not allowing them to shower, they have no ice to give them, they are only feeding them sandwiches for breakfast, lunch, and dinner,” the email reads. “My friend is living in filth with no hot water, his toilet is leaking urine and feces and his room floor is covered in this infected water. They haven't had any cleaning products in over a month.”

The Georgia Department of Corrections has not released their findings into the investigations of the weekend incident.

However, on Wednesday, Joan Heath, director of the Department of Corrections Office of Public Relations, responded to 11Alive regarding the issues raised here.

"At no time during or after this incident did the facility lose power," Heath said, although they did not say whether or not power was intentionally cut to any part of the facility where inmates were housed.

As far as the allegation regarding a lack of working toilets, according to Heath, "currently, there are maintenance staff at the facility checking each and every cell for any inoperable toilet fixtures."

Regarding staffing shortages at Ware State, Heath said, "The GDC (Georgia Department of Corrections) has also assigned additional staff to assist with day-to-day operations during the lockdown of the facility."

The questions regarding an ongoing lockdown at the facility along with access to showers and proper hygiene for the inmates were also addressed by Heath.

"During this lockdown situation, inmates are being escorted to showers, and once lockdown is lifted, they have unlimited access to showers," she said.

The Department of Corrections was also asked about inmates only being provided sandwiches three times a day.

After hearing about the disturbance and alleged conditions inside Ware State Prison, the group Parole Reform announced they would have a protest on Thursday, August 6 at 1 p.m outside the Georgia State Board of Pardons and Paroles.

Protest organizer, Dwight Futch told 11Alive’s Hope Ford, former inmates and families of current Ware Prison inmates want to bring attention to “call out the inhumane conditions of the prison, the issues that lead up to the riot, the short staff of prison guards, and the lack of communication from the Georgia Department of Corrections to the families of inmates currently in the prison.”

Futch, a former corrections officer and former Cobb County inmate, previously raised awareness of the conditions within the Cobb County jail. He told 11Alive the current state of prisons in Georgia needs to be addressed in order to keep inmates and staff safe.

Ware State Prison is located outside of Waycross, about 200 miles southeast of Atlanta. In July, an inmate was killed in what officials said was an altercation with another inmate.