What we know | 8 killed at 3 spas in metro Atlanta 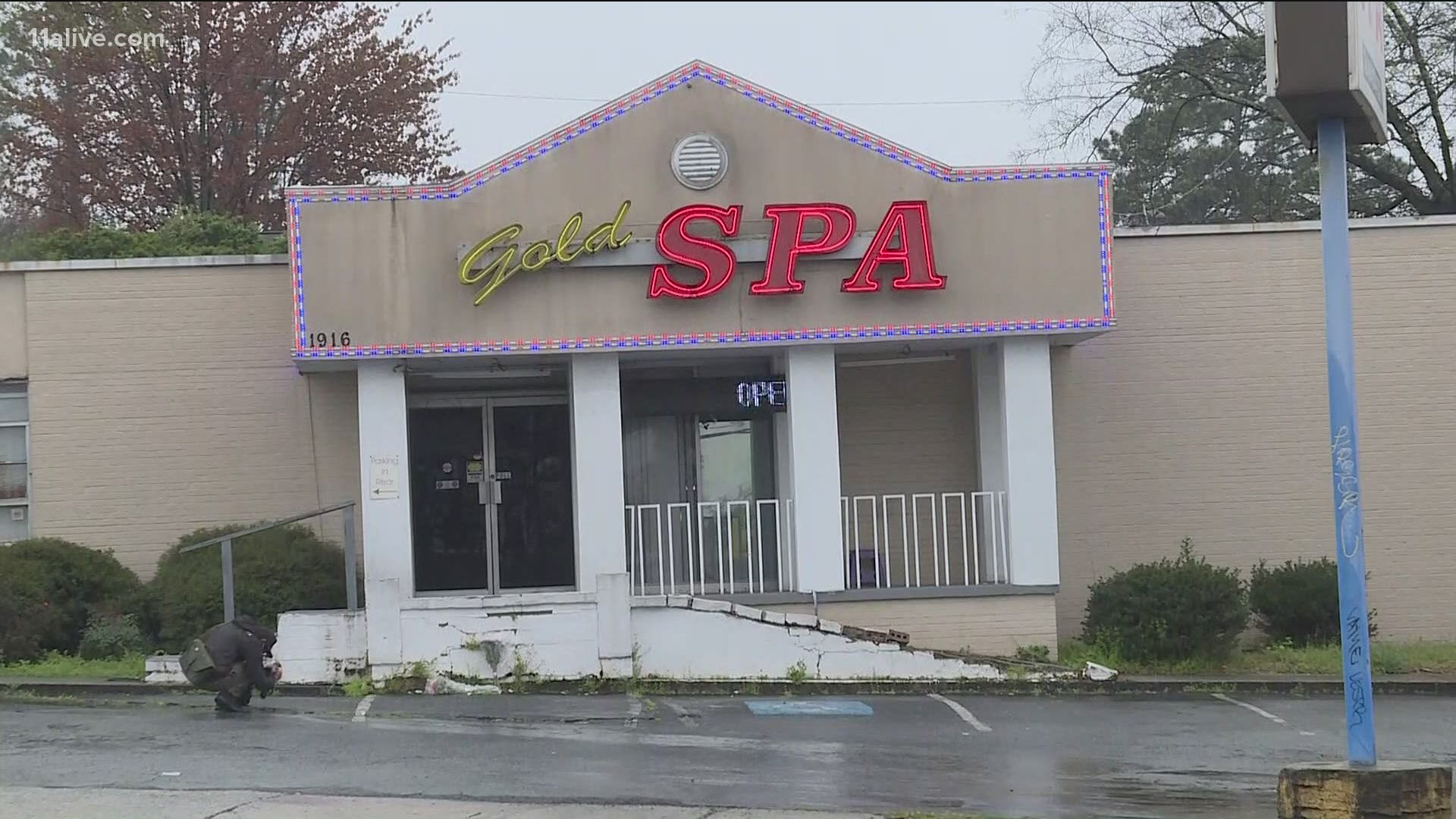 A man was arrested after eight people were killed in shootings at three spas in Cherokee County and Midtown Atlanta Tuesday. The FBI is assisting local officials with the investigation and President Biden has been briefed.

Two spas were in Atlanta and one was in Cherokee County.

The first shooting happened at Young's Asian Massage Parlor, on Highway 92 near Bells Ferry in Cherokee County, where four people were killed and one man was injured.

Cherokee County authorities said they received a call around 4:55 p.m. regarding the shooting. They were able to identify the suspect quickly. They said family members contacted them because they thought the suspect might have been their son. They said the leads helped them track his cell phone and locate him.

1 / 5
AP
Law enforcement officials confer outside a massage parlor following a shooting on Tuesday, March 16, 2021, in Atlanta. Shootings at two massage parlors in Atlanta and one in the suburbs have left multiple people dead, many of them women of Asian descent, authorities said Tuesday. (AP Photo/Brynn Anderson)

"We're really appreciative of the family," Captain Jay Baker of the Cherokee County Sheriff's Office said. "Without them this would have not have happened as quickly as it happened."

The second and third shootings happened at Gold Spa and Aromatherapy Spa on Piedmont Rd. in Midtown Atlanta about 45 minutes later. Atlanta Police said three people were killed at the Gold Spa. The fourth person was killed across the street at the Aromatherapy Spa.

APD Interim Police Chief Rodney Bryant said they received the first call to respond to 1916 Piedmont Road, but while officers were there, that's when they got the call about the last shooting.

At Young's Asian Massage Parlor all police have released about the victims are brief descriptions. Officials described two as Asian women, one as a White woman and one as a White man. The person still hospitalized, who is 30 years old, is a Hispanic man, officials said.

Cherokee County deputies identified the victims who died as the following:

We've learned that Xiaojie Tan, was a licensed Massage Therapist.

Long now faces eight murder charges - one for each victim that died - and a ninth charge of aggravated assault for the fifth Cherokee victim still recovering in the hospital.

Robert Long, a 21-year-old white man from Woodstock, Georgia is the only suspect for all three shootings. According to Cherokee County officials, video surveillance at the Atlanta spas show the same man and car that the video shows at the Cherokee County spa.

Just before 9:00 p.m. on March 16, Cherokee officials said he was arrested in Crisp County, Georgia which is off I-75 in south Central Georgia, about 150 miles south of Atlanta. Officials told 11Alive's Jon Shirek a Georgia State Patrol trooper used a PIT maneuver to stop his vehicle after deputies recognized him.

Baker said during the news conference Wednesday that Long took responsibility for the shootings.

"He apparently has an issue. What he considers a sex addiction and sees these locations as something that allows him to go to these places and it's a temptation for him that he wanted to eliminate," Baker said.

Baker added that it's still early in the investigation, so they are still examining the motive. He also said the suspect claimed he was planning to go to Florida to do more acts in that state.

It's unclear at this time if Long had ever been to those specific locations before the shootings.

"I think that is important that we first acknowledge the fact I know that many we've received a number of calls about is this a hate crime. We are still early in this investigation. So we cannot make that determination at this moment. Again, we are very early in this investigation," Bryant said. "Even though we've made an arrest, there's still a lot more work to be done."

What Asian advocacy groups are saying

Asian Americans Advancing Justice left this statement on Twitter shortly before midnight - "We are shaken by the violence in our city that has left 8 ppl dead, including members of the Asian American community. We are gathering info about what happened & the needs of directly impacted are. Now is the time to hold the victims & their families in our hearts & with light."

Stop AAPI Hate said in part, "right now there is a great deal of fear and pain in the Asian American community that must be addressed."