Have you been hearing a lot of fireworks? | Some police departments see uptick in complaints

People have noticed fireworks night after night, for several weeks in Georgia and across the country. With that, comes theories as to why. 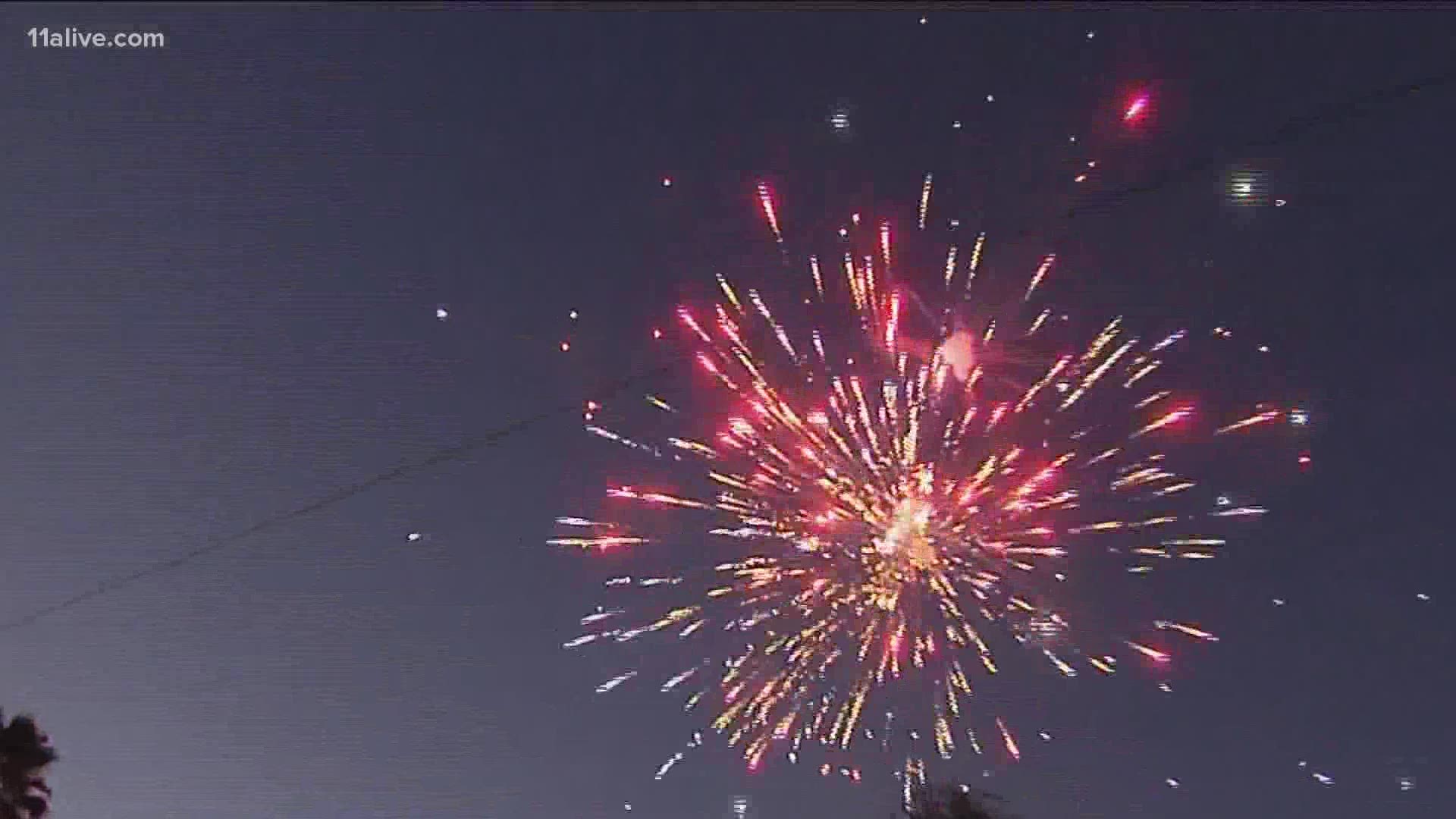 ATLANTA — In Georgia, it seems normal to hear fireworks go off a few days before July 4th. But recently, people have noticed fireworks night after night, for all hours and for weeks.

Here's what we were able to find out.

For some, the ongoing light shows, inspired them to head out and get their own supplies. Alex, a customer stopping by Pyro City Fireworks in Conyers, filled his basket with the help of his daughter.

“It made me want to get in on the fun,” he said. “Because of COVID, we’re just going to have a few people over this weekend and have a small party.

The anxiety for some

Not everyone shares the same enthusiasm. Years of research show fireworks can negatively affect people with PTSD and/or frighten animals. However, the constant displays are starting to leave others feeling unnerved.

Stockwell lives in Athens and noted he’s had a hard time sleeping because since fireworks started going off near his home in the middle of June.

“I don’t get scared easily, but I do sometimes still jump because it’s unexpected. It sounds too close for comfort and sometimes you wonder if it was a gunshot or a firework,” he explained.

What's with all the fireworks?

Over in Atlanta, near the skate park in Old Fourth Ward, Stephen Osborne is starting to get used to the nightly display, since hearing them for the last week and a half.

“I don’t want to make it sound like Afghanistan or anything like that, but, you will have people in their apartments, reading and all of a sudden, it’s a few fireworks and you walk outside and there’s smoke everyone,” Osborne said. “Honestly, I think people are starting to become a bit desensitized at this point.”

There’s dozens of stories like these on social media and neighborhood apps. People writing, “what’s with all the fireworks?” “could you please stop with the fireworks?”

And since fireworks are going off nightly in all areas of the country seemingly at the same time, it’s making people wonder, what’s going on?

RELATED: Where to watch July 4th fireworks on TV, online this year

So, why is it happening?

Theory one is quarantine boredom.

“Since Memorial Day, the switch turned on and it’s been busy,” said Steve Putthoff, GM of Pyro City Fireworks in Conyers.

Business is, well, booming for fireworks companies because of backyard celebrations.

Phantom Fireworks reported their sales doubled across all 80 stores in the U.S.

Similarly, Pyro City also noticed a size-able spike in sales, which makes Putthoff grateful, seeing as though he had to shutter his business for a few months during the pandemic shutdown.

Putthoff explained, “Obviously everyone’s been pent up. We’ve had people come in for graduations, birthdays. Everyone’s just celebrating getting out of the house.”

Theory two is that the fireworks are part of recent protests. Fireworks were used by some protesters and police during the first few nights of protests in Atlanta. However, the displays have continued for weeks, sounding off all throughout the night, even in areas where there’s no protests.

Both Stockwell and Osborne noted some displays started as early as 5pm or 7pm and would sometimes last into the early morning hours.

Theory three is more of a conspiracy.

Social media lit up with a theory that the fireworks were part of psychological warfare, a technique used to influence a value or belief systems and emotions. Some social media users pointed to the government or law enforcement using the method to demoralize or prevent Black Lives Matter protests, while others wrote the Psy Ops were being used to desensitize people in suburbs so they wouldn’t be prepared for an attack.

However, given that families were visiting stores like Pyro since May and others witnessed neighbors or kids firing them off, there’s not much to support theory three.

As Osborne noted, “I was walking and seeing ordinary people firing them off in the skate park.”

The final theory is the time of year.

Law enforcement noted, that despite the recent higher numbers, fireworks calls always increase from June to July. In addition, with Father’s Day, Juneteenth, and other big events canceled by the pandemic, people who support theory four seem to think, that’s just how you do it in 2020.

READ: List of Georgia COVID-19 testing sites that will be open during 4th of July holiday weekend

Since it’s legal in Georgia to pop fireworks all year long between 10 a.m. and 11:59 p.m., Putthoff believes this may last for a while.

“I anticipate we’re going to be busier than normal until Labor Day.”

But others, hope this all fizzles out after Independence Day.

“I’m really hoping with the Fourth of July, that is kind of wraps up. If this is going to be a continuous thing and it keeps going more and more, it’s going to make me question things,” said Stockwell.

Osborne added, “For my own sleep cycle, I hope it ends on July 4th. I hope it ends in a way that people are like, 'OK, been there, done that, there’s no need to go set off any more fireworks.'”

Will law enforcement start cracking down?

Some departments tell 11Alive, depending on the call volume, they tend to prioritize other serious calls, prior to dispatching someone for a fireworks complaint. Some departments said unless there’s other criminal activity suspected, officers do not respond to fireworks calls during the times it’s legal to fire them.

Fireworks responses from law enforcement ; note, not all departments responded to 11Alive’s request for data.

Dunwoody: We had approximately seven fireworks related calls in June 2020 and five in June 2019. We will typically respond to any complaint if it’s outside of permitted hours or unsafe conditions are reported. In 2019 and 2020, the majority of the calls regarding fireworks were received in the middle to late weeks of June leading up to the 4th holiday.

Cobb County: We have seen more fireworks calls. June 2019 we had 55 calls and June 2020 we had 219 calls. From the 911 perspective, we put in every call and dispatch or notify every one depending on call volume at the time. It is then up to the police road supervisor on whether the officers actually go check them out or zone patrol them instead.

Bartow Co: Complaints typically start later in the nighttime hours after a reasonable time has been given and individuals are starting to settle down for the night and/ or go to bed.  Either by being a noise complaint, upsetting children, and animals are when complaints are received by E911 Centers.  An increased use of fireworks is seen in the month of June only because of the purchase of fireworks leading up the 4th of July events.  People like to set a few off in anticipation of July 4th Holiday.  Calls are as dispatched by priority and handled as Deputies become available in high volume hours/ times.

President Trump at Rushmore: Jets and fireworks, but masks optional