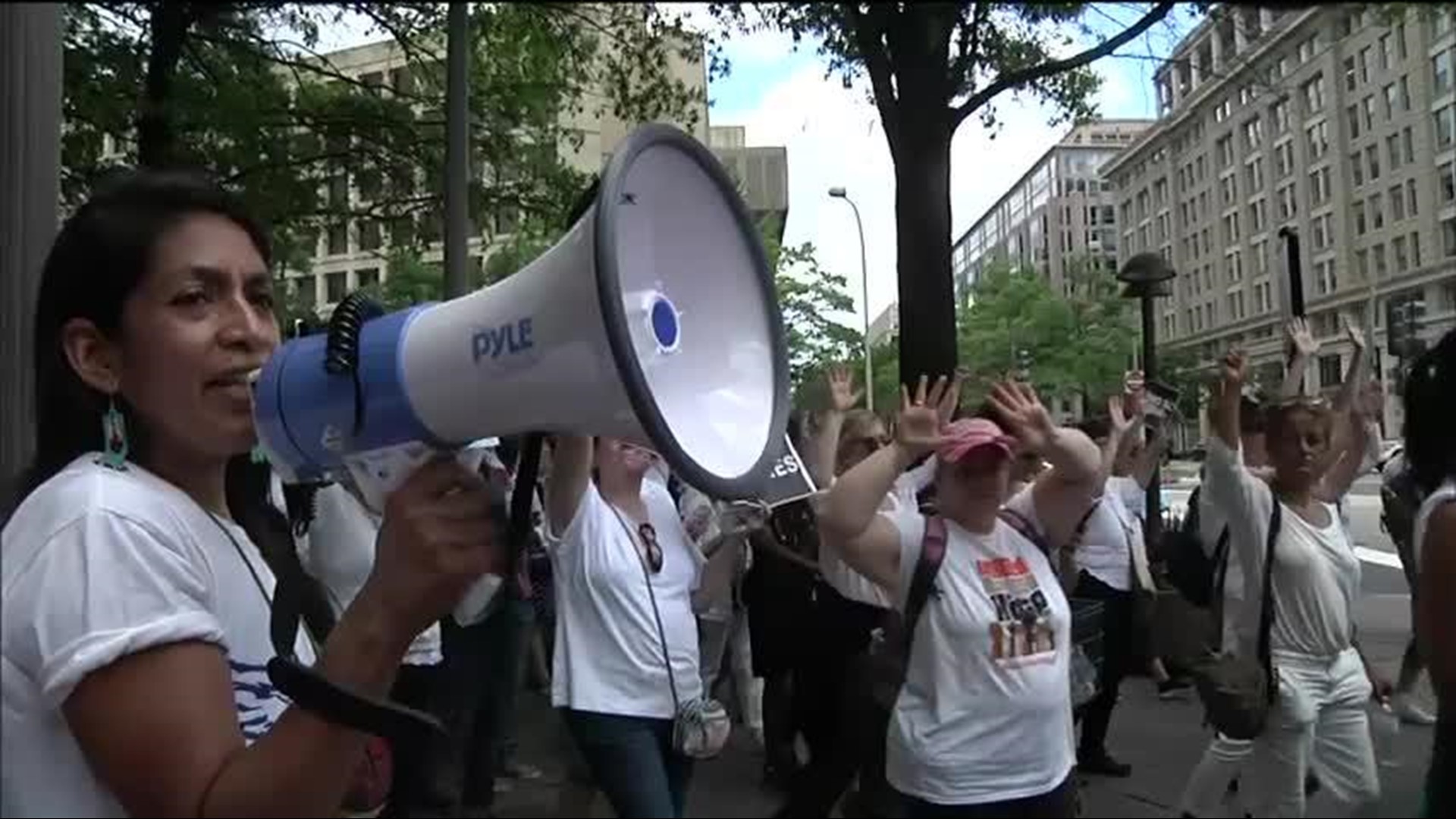 Credit: Susan Walsh, AP
Protesters shout "shame" as they march past the Trump Hotel during an immigration rally in Washington, D.C., on June 28, 2018.

Hundreds of thousands of people are expected to march in dozens of U.S. cities on Saturday to protest family separations carried out by the Trump administration, according to organizers.

The marches have been building steam in recent days, with thousands turning out in Washington, D.C., and other cities on Thursday. Those are expected to culminate in a nationwide series of rallies, protests and vigils on Saturday that will take place on streets, community centers and outside Immigration and Customs Enforcement facilities.

The protests, organized by the Families Belong Together coalition, will focus on the administration's "zero tolerance" policy that has resulted in the separation of more than 2,000 children from their parents. But organizers say the gatherings will provide a forum for people to call out the president's broader push to limit legal and illegal immigration, from his controversial travel ban to his ending deportation protections for hundreds of thousands of legal immigrants.

As protesters prepare to take to the streets, here's a look at the current situation on a variety of key immigration issues.

A federal judge in California issued a nationwide injunction Tuesday that forbids the Department of Homeland Security from separating any more children from their parents, and orders department officials to reunite more than 2,000 children with their parents within 30 days.

District Judge Dana Sabraw, appointed to the bench by President George W. Bush, ruled that the administration must establish "regular communication" between parents and their children within 10 days. Children under the age of 5 must be reunited with their parent within 14 days, and all other minors must be reunited within 30 days.

The judge chastised the administration for mismanaging the separation process, writing that the federal government now tracks people's property more carefully than its children.

Now the multiple federal agencies responsible for housing parents and children are racing the clock to either release or reunite all children with their parents within the rigid timeline established by Sabraw.

More:  Is illegal immigration linked to more or less crime?

More: Trump claims that U.S. has 'weakest and worst' immigration laws in world

After receiving backlash from immigrants, Democrats and Republicans, President Donald Trump signed an executive order on June 20 to end the practice of separating parents from their children after being arrested.

But the order did not end the administration's policy of referring all migrants caught illegally crossing the border for criminal prosecution. The order says the administration will "rigorously enforce" immigration laws and "initiate proceedings" accordingly. And Trump said after signing the order that officials will have "zero tolerance" for people crossing the border illegally.

What has changed is that immigration agents have temporarily stopped charging border crossers if they arrive with children.

On Monday, Customs and Border Protection Commissioner Kevin McAleenan said he instructed agents to stop charging parents with illegal entry, which is what prompts family separations. But he made clear that his agency is working with the Department of Justice to figure out a way to continue criminally charging all illegal border crossers while keeping them detained with their children.

1 / 15
Matthew Hinton, The Advocate, via AP
Protestors clash with law enforcement outside the Ernest Morial Convention Center in New Orleans, La. Monday, June 18, 2018 after U.S. Attorney General Jeff Sessions spoke at the National Sheriffs' Association opening session. Protestors were against the detainment and separation of immigrant children from the parents on the U.S. Border.

The Supreme Court handed Trump one of his biggest legal victories Tuesday when it upheld the third version of his controversial travel ban targeting majority-Muslim countries.

The first two versions were struck down by federal courts, which argued that the president's statements about instituting a Muslim ban violated federal law and due process protections enshrined in the Constitution. A 5-4 majority of the High Court concluded that the third version did not suffer from religious animus and was instead a legal exercise of a president's authority to ban foreigners if they are deemed "detrimental to the interests of the United States."

Despite repeated calls from the White House and immigration advocacy groups for Congress to step into the fray, both Republican-controlled chambers have been unable to pass any kind of legislation.

The latest failure came Wednesday, when a "compromise" bill negotiated between different GOP factions was voted down in the House of Representatives 121-301.

The bill would have addressed a variety of lingering immigration issues, from ending family separations to Trump's border wall to a solution for nearly 800,000 undocumented immigrants brought to the country as children whose deportation protections were terminated by Trump.

The Senate has not taken up any immigration-related bills since February, when the chamber failed to pass several bills to protect those young undocumented immigrants who had been protected under the Deferred Action for Childhood Arrivals (DACA) program that was ended by Trump. The program remains active following a judicial order in January and will ultimately be decided by the Supreme Court.