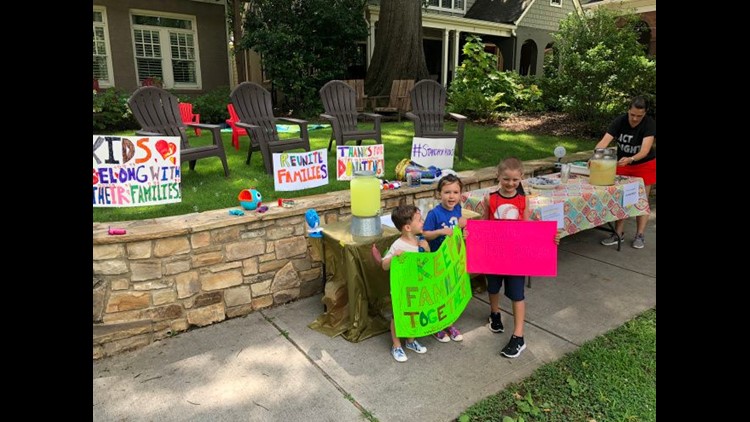 Like the Atlanta 6-year-old who decided to start a lemonade stand to raise money for immigrant children separated from their parents at the border.

Mom Shannon Cofrin Gaggero wrote on her blog, StrivingParent.com, that she discussed with her 6- and 3-year-olds what was happening at the U.S.-Mexico border and asked how they thought they could help.

" 'What about a lemonade stand?' my son suggested."

Gaggero said she asked her local community on Facebook if anyone would be interested in in helping.

The response was overwhelming

Families near them jumped in to assist immediately, Gaggero wrote.

Then people wanted to help from afar.

"I created a 'virtual lemonade stand' via Facebook’s fundraiser tool in support of RAICES, an organization that promotes justice by providing free and low-cost legal services to underserved immigrant children, families and refugees in Central and South Texas," she wrote.

According to Time, Gaggero ended the fundraiser after reaching $13,000, so she could quickly get the money to the organization, as "Facebook fundraisers pay out donations every two weeks once the minimum payout amount of $100 is met."

Gaggero told Time her son was extremely happy with the outcome.

In a conversation over online messaging with All the Moms, Gaggero said she encourages people to donate to border-state organizations like RAICES, but to also do research into their own local community organizations helping immigrants.

"Action breeds hope. Without action, my heartbreak is meaningless," she wrote. "How are you going to act? Today?"

Raising children who are aware of the world

Gaggero also told All the Moms that she wants people to know this lemonade stand was not a one-off event.

"We've been trying to raise our kids to be racially and socially conscious for several years," she said.

StrivingParent.com was created after nine people were shot at a historic black church in Charleston, S.C. Gaggero said she was "horrified ... by my own passivity when it came to racial justice and how I was raising my kids."

In light of all the media surrounding her son's lemonade stand, Gaggero said she wanted to juxtapose her situation with that of the #PermitPatty  event over the weekend, in which a woman called the cops on an 8-year-old girl in San Francisco for selling water bottles without a permit. The woman, Alison Ettel, was white. The child was black.

(Ettel has since resigned her job as CEO of a California cannabis company.)

"We didn't have a permit and were playing loud music, blocking sidewalks, etc. Without incident," she told All the Moms. "This would not have happened had we been black, brown or lived in an over-policed community."