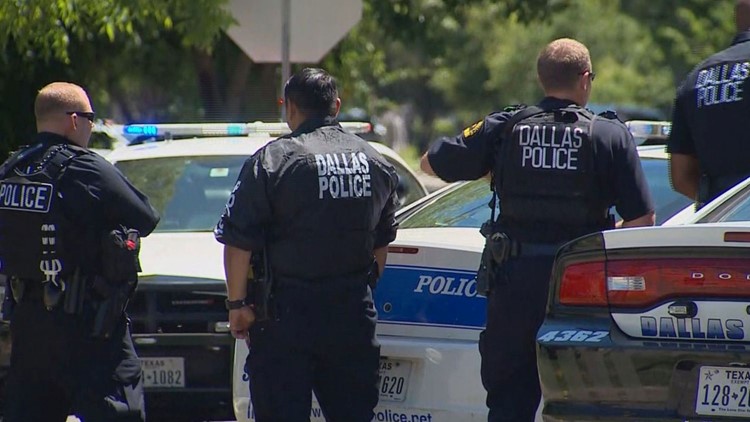 Photo by: WFAA-TV, Dallas-Fort Worth
Dallas police were on the scene of a shooting east of downtown Dallas in which a firefighter was shot Monday, May 1, 2017.

Texas law enforcement officials Sunday arrested a Dallas police officer in connection with a manslaughter warrant after she fatally shot one of her neighbors, a black man, in his apartment last week.

Amber Guyger was booked into the Kaufman County Jail about 7:20 p.m. Sunday, according to online records. She posted a $300,000 bond and was released, jail officials said.

The 30-year-old Guyger, who is white, fatally shot 26-year-old Botham Jean on Thursday. Lawyers for Jean's family had been calling for Guyger's arrest, saying the fact that she had remained free days after the shooting showed she was receiving favorable treatment.

Police say Guyger, a four-year veteran of the force, told investigators she was returning home from her shift Thursday night and accidentally entered Jean's apartment. Guyger  believed Jean was an intruder and shot him, police said. Police have released few other details.

"Right now, there are more questions than answers," Police Chief Renee Hall said. "We understand the concerns of the community. That is why we are working as vigorously and meticulously as we can to ensure the integrity of the case and the department is upheld."

The Dallas Police Department on Friday turned over the case to the Texas Rangers, a law enforcement division within the state public safety unit, citing the need for transparency in the investigation.

In a Sunday night statement, Dallas Mayor Mike Rawlings praised Hall's decision to call in the Rangers "to handle the investigation to ensure there was no appearance of bias."

"Please continue to pray for the family of Botham Jean tonight and in the weeks and months ahead," Rawlings said.

In May 2017, Guyger was called to assist another officer searching for a suspect. An affidavit indicates a man identified as Uvaldo Perez got out of a car and became combative with Guyger and another officer. A struggle began and Guyger fired her Taser at Perez, who wrested the weapon away from her. Guyger then drew her gun and shot Perez in the abdomen, the affidavit says. Guyger was not charged in the case.

Jean's family has been demanding charges against Guyger in Jean's death. Guyger has been placed on paid administrative leave.

Hall announced Friday that investigators were preparing a warrant for a manslaughter charge. A day later, after turning over the case, she said the Rangers had asked her to hold off on the charges. The Rangers, she said, had interviewed Guyger and wanted to further investigate information obtained from her.

“She took my life away, like my very own life,” said Jean's mother, Allison. “She has to face whatever the law says. The very Bible says to render to Caesar that which is Caesar so if Caesar says to pay a penalty for a life, then she has to pay.”

More: Reds to hold moment of silence for shooting victims in Cincinnati

Before Sunday's action against Guyger, the family's lawyer, Lee Merritt, said the lack of an arrest had added to the family's grief.

“We believe the fact that that has not happened yet is a reflection on deferential treatment for law enforcement officers," Merritt said.

Jean, 26, was a graduate of Harding University who worked at PricewaterhouseCoopers in Dallas. Rawlings called Jean "a great man" and "exactly the kind of citizen we want to have in the city. ... We've lost a potential leader for this city for decades to come."

“This world isn’t fair and it’s full of trouble," Genery said. "But in Jesus Christ, there is unity and there is hope, and I’m going to see him again with my Lord in heaven.”

His uncle, Ignatius Jean, said the entire family was shocked when they heard the news of Jean's  death.

"You want to think it's fiction," he said. "You have to grapple with reality.

Allison Jean flew to Dallas from the family’s native St. Lucia after the shooting. Her son will be buried on the Caribbean island Thursday.