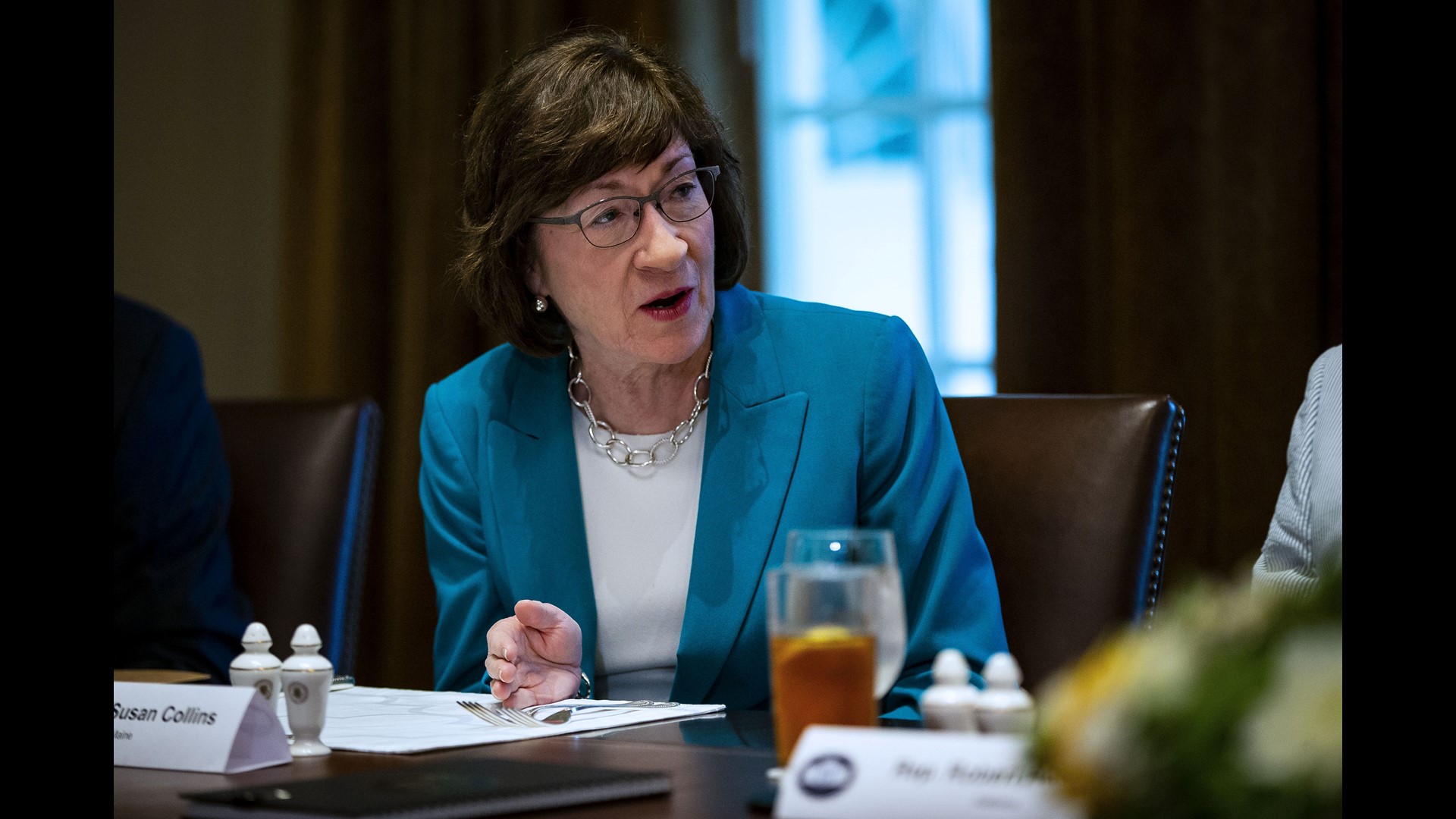 Credit: Loren Townsley/ The Republic
Sen. John McCain, R-Ariz., a longtime hawk on U.S.-Russia relations and a frequent critic of President Donald Trump, said Russia remained "unworthy” to be readmitted to the G7.

Kavanaugh's nomination to the high court will need at least 51 votes and with the Arizona Republican still home-bound in his Cornville cabin following brain-cancer treatment, the GOP's two-vote margin in the Senate is precariously thin, even with tie-breaking Vice President Mike Pence's presumed support.

Trump's Monday night prime-time announcement of the nomination of Kavanaugh, a former attorney and top aide to President George W. Bush, would move the high court in a more conservative direction for decades to come.

The president described Kavanaugh as "one of the finest and sharpest legal minds" of the modern era and called on the U.S. Senate to move quickly to confirm him. For the past 12 years, Kavanaugh has served on the powerful U.S. Court of Appeals for the District of Columbia Circuit.

McCain, a high-profile GOP critic of Trump's, has not been in Washington, D.C., since late last year. There has been no widespread public demand for McCain, a six-term veteran and former presidential nominee, to resign as he works through his health challenges, but some on the right have made it clear they would prefer someone more in line with Trump's agenda in the seat. McCain cannot vote from Arizona, but has otherwise remained engaged with his job, putting out official statements and commenting on Twitter.

It is unclear whether McCain, 81, would return to the Senate to weigh in on Trump's selection of Kavanaugh.

If that happens, Trump may have to return with a less-ideological choice.

1 / 8
U.S. Court of Appeals for the District of Columbia Circuit photo
Brett Kavanaugh of Maryland, 53, U.S. Court of Appeals for the District of Columbia Circuit Pluses: Like Associate Justice Neil Gorsuch, named to the high court by Trump last year, he is out of conservative central casting. A Yale Law graduate to Gorsuch's Harvard, they served together as law clerks to retiring Justice Anthony Kennedy. Whip-smart and popular with the Federalist Society set, he has a long record of opinions and dissents that leaves little for Trump or Senate Republicans to worry about. Minuses: That long record will give opponents much to work with. His mild dissent in a case upholding the Affordable Care Act's individual mandate left room for conservatives as well as liberals to disagree. His contention that presidents should be free from lawsuits and investigations likely pleases Trump but will confound Democrats. His work in the George W. Bush administration also could come back to haunt him.

"It moves us potentially closer to a more traditional type of nominee who gets consensus support," Super said. "Democrats traditionally have nominated more liberal judges, Republicans more conservative ones."

Senate President Mitch McConnell's elimination of the filibuster for Supreme Court nominees has eliminated the need for Democratic support and allowed Trump to focus on conservative jurists, he said.

"The president's nominees have been targeted only at the Republican base rather than the broader segment of the country," Super said. McCain's absence, "puts us back to where they more traditionally were," he said.

More: For progressives, there's a bright side to Brett Kavanaugh's supreme Court nomination

In a written statement, McCain praised Kavanaugh late Monday, saying Trump selected a jurist with "impeccable credentials and a strong record of upholding the Constitution." McCain described Kavanaugh as a "fair, independent, and mainstream judge" respected among his peers.

"One of the Senate's highest constitutional responsibilities is to provide advice and consent on nominations to the Supreme Court, and I look forward to the Senate fulfilling this critical duty through a fair and thorough confirmation process," McCain said.

Assuming McCain remains out, Trump must secure the support of Republican Sens. Susan Collins of Maine and Lisa Murkowski of Alaska, both of whom joined McCain and Senate Democrats last summer to thwart Trump's efforts at torpedoing the Affordable Care Act.

Trump can afford only one GOP defection and still confirm his nominee to the nation's highest court. McConnell has said the Senate will vote on Trump's nominee in the fall.

Senate Republican leaders likely will have the votes to fill retiring Justice Anthony Kennedy's seat with Trump's nominee, he said.

"They’ve already decided, probably, that he is not going to be present and I don’t see a scenario in which he would be compelled to be there," Herrera said. "He is also a big believer in the Senate's regular rules of order, and so I'm guessing from what he has said in the past, he would want the candidate the White House sends forward, to survive a majority vote.

"And if they can't, I would think he would be satisfied with that."

U.S. Sen Jeff Flake, another Arizona Republican with an antagonistic relationship toward Trump, said on CNN Monday afternoon he would attend Trump's announcement.

Flake said he has found nothing “disqualifying” so far about any of the four finalists, saying they were “certainly strong conservatives.”

Immediately following Trump's announcement ceremony, Flake said in a written statement he looked forward to meeting with Kavanaugh and reviewing his record.

Kavanaugh said he would begin meeting with senators on Tuesday.

“As I have said before, approving a nominee who will interpret the Constitution rather than legislate from the bench should be our top priority," a statement from Flake said.

Kavanaugh, who is Catholic, worked for independent counsel Kenneth Starr during the Whitewater investigation of President Bill Clinton. He is considered a potential opponent of Roe v. Wade, the 1973 ruling that legalized abortion.

McCain and the Democrats

McCain's absence could give liberals a better chance to avoid what they would view as a bad nominee, but McCain has rarely been an ally for Democrats when it comes to Supreme Court picks.

In October 2016, when Hillary Clinton, the Democratic presidential nominee, looked headed to the White House and control of the Senate was also in doubt, McCain signaled he would stand ready to thwart her picks.

"I promise you that we will be united against any Supreme Court nominee that Hillary Clinton, if she were president, would put up," he said in an interview with a Philadelphia radio station.

More: Schumer vows to fight Trump SCOTUS nominee 'with everything I have'

The next day, McCain's office clarified that he meant only that Clinton's history had suggested she would nominate far-left justices, which he would not support.

"There's estimates as many as three vacancies could be coming over the next three years," McCain said. "That can affect us for decades. So it's my passionate argument for keeping the United States Senate in Republican hands, as a check and balance to whoever the president of the United States is."

In 2009, he voted against confirming Sonia Sotomayor to the high court, though he acknowledged that the nominee of President Barack Obama had the necessary legal background made her fit for the court.

In 1987, McCain voted to confirm Bork, a federal appeals court judge painted as an extremist by Democrats and whose conservative legal opinions and loyalty to President Richard Nixon during the "Saturday Night Massacre" made him a hero to some Republicans.

"I believe Robert Bork will be an outstanding justice and contributor to the court," McCain said ahead of Bork's ill-fated confirmation vote.