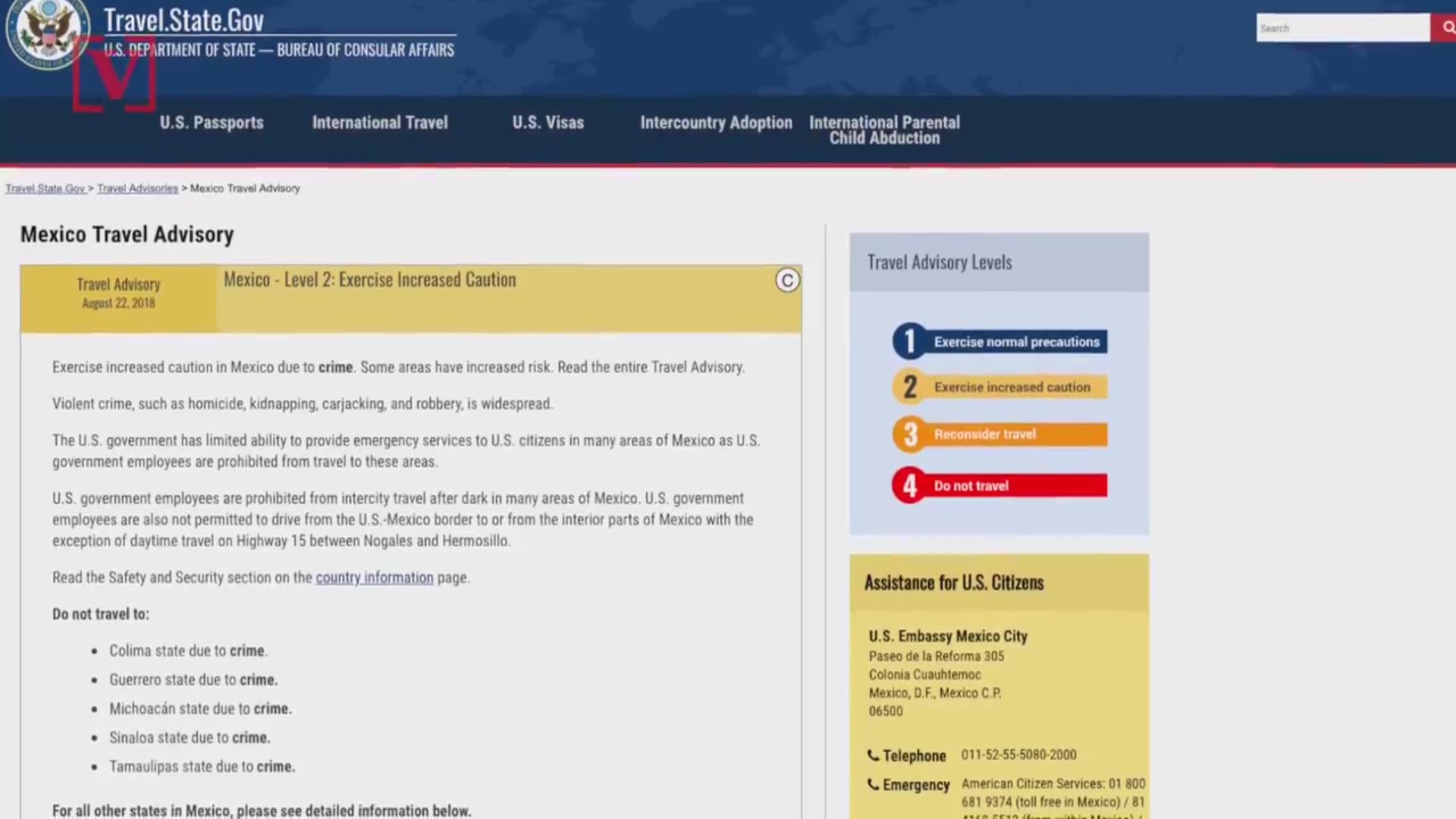 Corrections & Clarifications: An earlier version incorrectly identified the area of Mexico the travel advisory was issued.

The State Department issued a travel advisory Wednesday warning American citizens headed to Mexico to use caution in several states.

The advisory comes the same week eight bodies were discovered in Cancun, a tourist hub, but the travel warning does not refer to the Quintana Roo/Cancun area.

Mexican prosecutors say they have found a total of eight dead people on Cancun with two bodies dumped in two spots and four others individually found shot to death. None of the killings occurred in the city’s beachside hotel zone.

"Violent crime, such as homicide, kidnapping, carjacking, and robbery, is widespread," the travel advisory notes, referring to activity in the Mexican states Colima, Guerreo, Michoacán, Sinaloa and Tamaulipas and warning Americans to stay away.

The department also advised travelers to use toll roads, avoid driving at night, use caution when taking money out of banks or ATMs and be alert at local bars, nightclubs and casinos. It also advised not to display signs of wealth.

The U.S. government has limited ability to intervene in emergencies that citizens may face in Mexico, and government employees cannot travel to certain areas, the State Department said. That restriction does not include Quintana Roo state, where Cancun, Cozumel and Playa del Carmen are located.

"The State Department travel advisory for Mexico does not include any tourist or beach areas and reaffirms that all major tourist destinations in Mexico are safe," a spokesperson for the Quintana Roo Tourism Board said in a statement.

The State Department warning amplifies recent alarms about travel to Mexico. An investigation from the Milwaukee Journal Sentinel, which is part of the USA TODAY Network, found that more than 170 travelers have become sick, seriously injured — and in some cases have died — after drinking small and moderate amounts of alcohol at all-inclusive resorts throughout the country.

While the State Department, Democratic and Republican members of Congress, travel websites and Mexican authorities vow they are making changes and doing what they can to ensure the safety of travelers, their slow, bureaucratic efforts have yet to prevent the harms, the Journal Sentinel found. Reporters received information from tourists who had traveled as recently as July.

On Tuesday, the bodies of a man and a woman were found stuffed in the trunk of a taxi early Tuesday in the Paseos del Mar neighborhood of Cancun, local newspaper Riviera Maya News reported. The bodies have not yet been identified.

► Feb. 23: Mexico police shut down second black market tequila still
► Feb. 21: 'There is more to this deeper, darker story than we know'

Authorities discovered dismembered bodies of two men in multiple plastic bags at another location later that day.Another man was discovered bound and fatally shot. The prosecutors’ office for the state of Quintana Roo said another man was killed while lying in a hammock while another was found shot and covered in a plastic bag.

Authorities found the eighth victim decapitated in the neighborhood of Tres Reyes, more than a dozen miles from the hotels, according to Newsweek, citing local reports.

Visiting Cancun on a budget

1 / 23
Cancun Tourist Board
While Cancun is geared toward tourism, and skews pricey, there are ways to visit the destination and stretch a dollar.