Test flight: Aboard the innovative HondaJet

Test flight: Aboard the innovative HondaJet 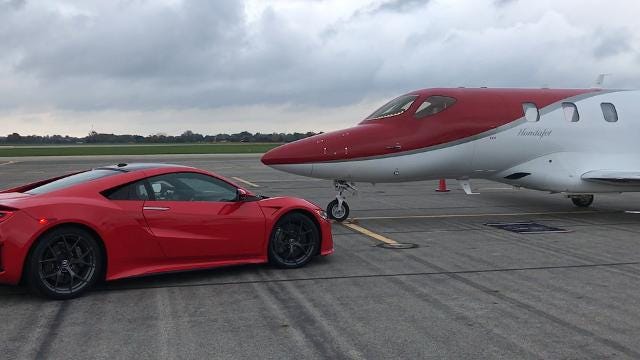 The HondaJet and Acura NSX experience: Planes and automobiles

Honda has developed a private jet as well as the second generation NSX sports car.

OHIO STATE UNIVERSITY AIRPORT—I grab the best seat on Honda’s light business jet, which is about to take off from this airport about six miles outside of downtown Columbus towards New Jersey’s Teterboro Airport.

I’m sitting next to pilot Tom Maurer, who has been test flying HondaJets for about six years.

Maurer has several sheets of paper that he’s poring through with instructions on speeds to reach at various points on the route. But he doesn’t really need the paperwork. He has three 14-inch landscape displays and two touchscreen controllers in front of him, and he maneuvers them like one would an iPad. He gets all the information he needs from the screen, developed by GPS technology company Garmin -- route, weather information, and details on aircraft around him.

During the 85-minute flight, he barely has to hold on to the control wheel. Everything is automatic. He keeps up with radio chatter, answering questions from air traffic control. But for the most part, he is changing frequencies and following instructions.

“It reduces the workload,” he says. “You don’t really have to touch the knobs.”

It’s quite a change for a former Navy man who has been flying planes for about 27 years. But he’s enjoying it.

The single-pilot HondaJet, the first of which flew in June 2014, has a patented over-the-wing engine that maximizes cabin and storage space. It also reduces cabin noise.

It’s not unusual for car manufacturers to delve into the aviation industry. Saab, Mitsubishi and Toyota also develop private jets.

Honda estimates that because of its unique design, the aircraft gets 17% better fuel efficiency for a typical mission of an aircraft its size.

The HondaJet was the brain child of Michimasa Fujino, an engineer who is now the CEO of Honda Aircraft Company, a Honda subsidiary. He first sketched the design in 1997.

United’s new 18-hour flight is longest-ever by a U.S. airline

Today, 20 years after Fujino came up with the idea for the HondaJet, the company has delivered 58 planes at a price tag of about $5 million each. The aircraft is certified in the USA, Mexico, Europe, Canada and Brazil. It will also soon spread its wings to China.

But Honda is best known for its cars, and it is continuing to make advances with its flagship, the second-generation Acura NSX, a two-seat, mid-engine sports car. The price tag can reach nearly $200,000.

The vehicle is produced at Honda’s Marysville, Ohio, plant. The operations there began 40 years ago with about 64 people building motorcycles. Now, the facility spans 8,000 acres with about 15,000 employees. The campus houses not just the plant, but offices and tracks for test-driving.

Now Honda has combined its two operations from a customer standpoint by offering its clients packages that will let them experience the HondaJet and the Acura NSX.

Priced from $800 to $10,000, clients can customize their experiences to test drive an NSX, fly on the HondaJet, tour the factory, and visit the Honda Heritage Center, a museum that tells the story of the Japanese company’s presence in North America.

Those who have purchased a vehicle can even watch their actual car being made.

On a recent Wednesday, I get to do all three over the span of 11 hours. We take off from Teterboro around 8 a.m. and land in Ohio about 90 minutes later.

The jet can fit up to seven people, including the crew. The cabin itself is almost 5 feet in height and 5 feet in width. The seats are comfortable and can be adjusted, either reclining or sliding farther into the aisle.

There's a pull-out table if we want to eat. Controls above adjust the window shades. There is a very well-concealed toilet in the back of the aircraft. Other options can be added to the aircraft, such as Wi-Fi.

It’s a smooth and quiet ride, even allowing for a short nap.

Upon arrival, we're whisked off to the Honda Heritage Center, where we see almost every vehicle that Honda has created, including a 1971 N600 and a 1980 Elsinore CR250R motorcycle. Employees, even top executives, wear white jumpsuits or white jackets. The museum is free and open to the public.

Next, we head to the testing facility, where we drive the NSX around a couple of sometimes very winding tracks, including a 7.5 mile high-speed one.

Our last stop is the plant where we watch a car being manufactured. The painting is done by a robot, but much of the work is accomplished by hand. We stop to watch two employees install an engine before turning it over to a machine.

After our tour, we return to the airport for our ride back home. This time I’m not in the driver’s seat, but I’m happy to sit back to enjoy the views as we approach the Manhattan skyline.