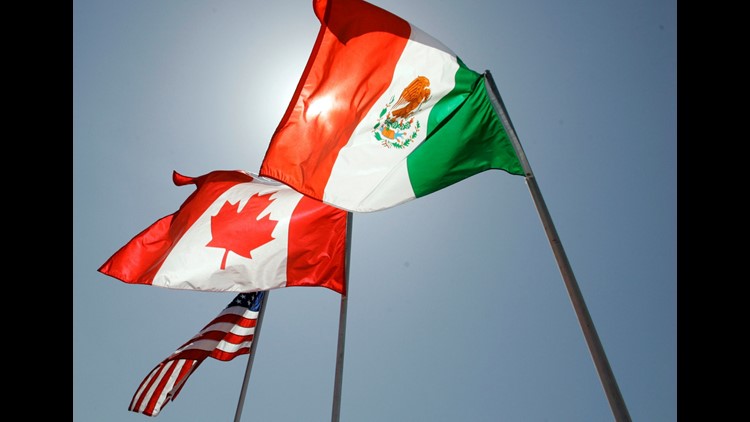 Photo by: Judi Bottoni, AP
National flags representing the United States, Canada, and Mexico fly in the breeze in New Orleans where leaders of the North American Free Trade Agreement met in April 2008.

WASHINGTON – President Donald Trump and the leaders of Canada and Mexico touted a new trade agreement between the three countries Monday as a historic deal that would benefit workers across North America.

But the hard work is far from over.

The agreement, which would replace the long-standing North American Free Trade Agreement, must be ratified by all three countries. The leaders of all three nations are likely to sign the deal by the end of November.

In the USA, Congress is unlikely to vote on the accord until early next year, when Democrats could hold a slim majority in the House and possibly even control the Senate as a result of the midterm elections in November.

At a Rose Garden news conference Monday, Trump called the trade agreement "truly historic news" but said he’s “not at all confident” that it will win congressional approval.

“Anything you submit to Congress is trouble, no matter what,” Trump said, arguing that Democrats “can take the greatest thing ever done and try to make it sound as bad as possible.”

Dairy farmers in Canada denounced the deal for giving the United States greater access to Canada’s dairy markets. Trudeau could have a difficult time selling the pact in Quebec, an important dairy-producing province.

Regardless, free and fair trade in North America “is in a much more stable place than it was yesterday,” he said. “We now have a path forward.”

In Mexico, the trade pact faces a much smoother road to passage even as the presidency changes hands in December.

The agreement, announced late Sunday night just before a midnight deadline imposed by the United States, is designed to replace NAFTA, a 25-year-old pact that essentially eliminated tariffs on most goods traded among the three countries.

The deal, the result of 13 months of negotiations, includes rules for the movement of products between the three countries and even a new name: the United States-Mexico-Canada Agreement, or USMCA.

In a briefing after Trump’s news conference, U.S. Trade Representative Robert Lighthizer said the trade agreement would make improvements in a number of areas, including automobiles, labor provisions, intellectual property, access to agricultural markets and a review mechanism.

The last-minute deal would provide the United States with greater access to Canada’s dairy market, a concession sought by Trump and U.S. dairy producers. The agreement contains rules requiring that a higher percentage of autos be made from parts manufactured in North America.

Under NAFTA, automakers can qualify for zero tariffs if 62.5 percent of their vehicles’ components are manufactured in the USA, Canada or Mexico. That figure would jump to 75 percent under the new deal. Starting in 2020, 30 percent of vehicle production would have to be done by workers earning an average production wage of at least $16 per hour. By 2023, that percentage would rise to 40 percent.

The agreement would run for 16 years but would be reviewed after six years and could be extended for another 16.

In Congress, the deal received favorable reviews from Republicans.

House Speaker Paul Ryan, R-Wis., applauded the Trump administration for “bringing Canada into the fold to reach a trilateral agreement” and said he looks forward to reviewing the text.

House Minority Leader Nancy Pelosi, D-Calif., said any trade agreement “must be judged by whether it improves the wages, working conditions and well-being of America’s workers and farmers."

Senate Minority Leader Charles Schumer, D-N.Y., said that NAFTA needed fixing and that Trump deserves praise for taking steps to improve it. But “any final agreement must be judged on how it benefits and protects middle-class families and the working people in our country,” he said.

One of the Senate's top Republicans, Sen. John Cornyn, who represents the border state of Texas, said in a statement he was pleased to see the three countries "modernize NAFTA," saying it's "a positive step toward maintaining a strong, unified North American economy, and I look forward to reviewing the details.”

More: What is NAFTA? Seven things to know about the North American free trade pact

More: Trump says he rejected a meeting with Canada that Canada says it never requested