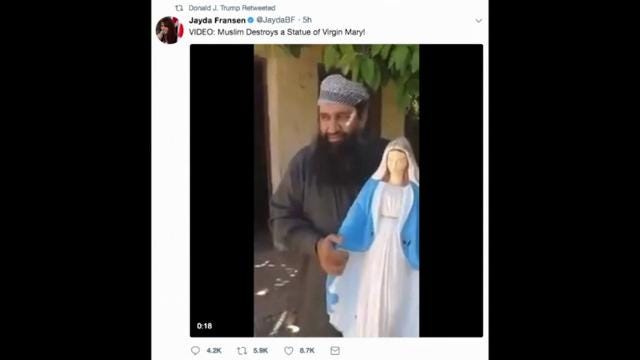 WASHINGTON — The backlash from President Trump's retweets of unverified anti-Muslim videos stretched into its second day on Thursday, as British Prime Minister Theresa May admonished her U.S. counterpart for promoting material from the far-right political group she called "a hateful organization."

Speaking from Jordan during a trip to the Middle East, May said the United Kingdom has been working with the United States to combat terrorists "from whatever source they come."

President Trump and British Prime Minister Theresa May speak during a dinner meeting at the NATO summit in Brussels, Belgium, May 25.

"The fact that we work together does not mean that we’re afraid to say when we think the United States have got it wrong, and to be very clear with them," May said. "And I'm very clear that retweeting from Britain First was the wrong thing to do."

May's comments were her most extensive since Trump retweeted a series of unverified videos depicting what appeared to be violence carried out by Muslims.

The back-and-forth kerfuffle between the two leaders escalated after Trump tweeted at May directly Wednesday night: "Don’t focus on me, focus on the destructive Radical Islamic Terrorism that is taking place within the United Kingdom. We are doing just fine!"

More: What is Britain First, the far-right group re-tweeted by President Trump?

More: Trump reacts to Theresa May's criticism of his far-right retweets: 'Don’t focus on me'

More: President Trump criticizes the wrong Theresa May on Twitter

The episode is just the latest incident that has tested the close working relationship between the U.S. and the United Kingdom that has bound presidents and prime ministers of different political parties for decades.

The Cold War-era concept of a "special relationship" — a term coined by Prime Minister Winston Churchill in 1946 — was built around nuclear weapons, special forces, and intelligence, said Tim Oliver, who studies trans-Atlantic relations at the London School of Economics.

"That core has long been protected from fallings-out between presidents and prime ministers," he said. "Trump, however, is pushing it to its limits."

Indeed, May appears to be facing a domestic backlash in the U.K. by appearing close to Trump — who has been supportive of British efforts to leave the European Union but has often clashed British leaders on intelligence and counter-terrorism issues.

London Mayor Sadiq Khan, a practicing Muslim who has clashed with Trump on similar issues before, called for May to cancel her invitation for Trump to visit the U.K. "Many Brits who love America and Americans see this as a betrayal of the special relationship between our two countries," he said on Twitter. "It is increasingly clear than any visit at all from President Trump to Britain would not be welcomed."

The videos originated with Jayda Fransen, the deputy leader of Britain First, who posted them with the captions: "VIDEO: Islamist mob pushes teenage boy off roof and beats him to death!"; "VIDEO: Muslim Destroys a Statue of Virgin Mary!"; "VIDEO: Muslim migrant beats up Dutch boy on crutches!"

White House press secretary Sarah Huckabee Sanders said she didn't think the president knew who Fransen was when he promoted her videos. "But he knew what the issues were," she said.

"I think what he's done is elevate the conversation to talk about a real issue and a real threat, which is extreme violence and terrorism," Sanders said.

After the videos spread, the Netherlands embassy in Washington protested that one of the videos in particular as misleading. "Facts do matter. The perpetrator of the violent act in this video was born and raised in the Netherlands. He received and completed his sentence under Dutch law."

Muslim groups have condemned the videos as hate speech, and said they could lead to more violence against Muslim Americans who are being increasingly targeted for hate crimes.

"It seeks to spread division and mistrust among our communities. It stands in fundamental opposition to the values we share as a nation: values of respect, tolerance, and — dare I say — just common British decency," said May. "British Muslims are peaceful. They're law abiding people who themselves have been victims of acts of terror by the far right."