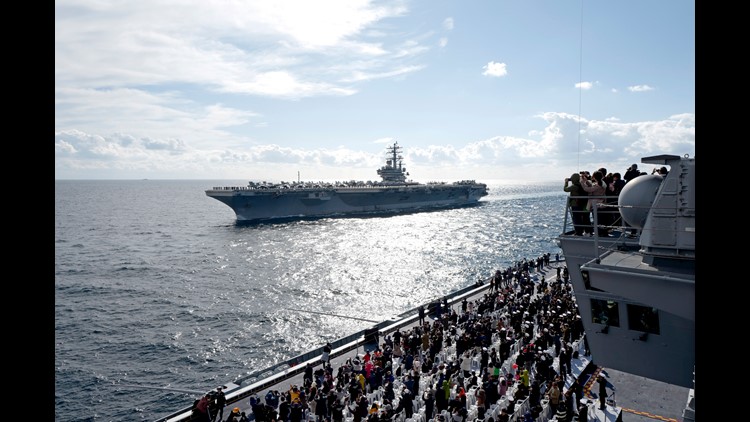 Photo by: JEON HEON-KYUN, EPA-EFE
Spectators watch the US Navy's Nimitz-class aircraft carrier USS Ronald Reagan sailing during the International Fleet Review in the sea of Seogwipo, off the island of Jeju, South Korea, 11 October 2018.

A number of sailors were injured Friday when a U.S. Navy helicopter crashed on the flight deck of the USS Ronald Reagan aircraft carrier in the Philippine Sea.

The Navy’s 7th Fleet said in a statement that the MH-60 Seahawk "made an emergency landing and crashed" shortly after takeoff at about 9. a.m. local time while the carrier was undertaking routine operations off the Philippine coast.

The statement did not specify how many sailors were hurt. Task Force 70 spokesman Lt. Cmdr. Matt Knight said 12 people were injured, military newspaper Stars and Stripes reported. Knight said four air crewmembers were aboard the helicopter when it crashed, according to Stars and Stripes.

The Navy said the injured were in stable condition for non-life threatening injuries ranging from minor abrasions and lacerations to fractures.

It said the most seriously injured were evacuated to a hospital in the Philippines, while the others were being evaluated by the carrier's medics.

"The cause of the mishap is under investigation," the 7th Fleet statement said. The aircraft carrier has resumed flight operations, it added.