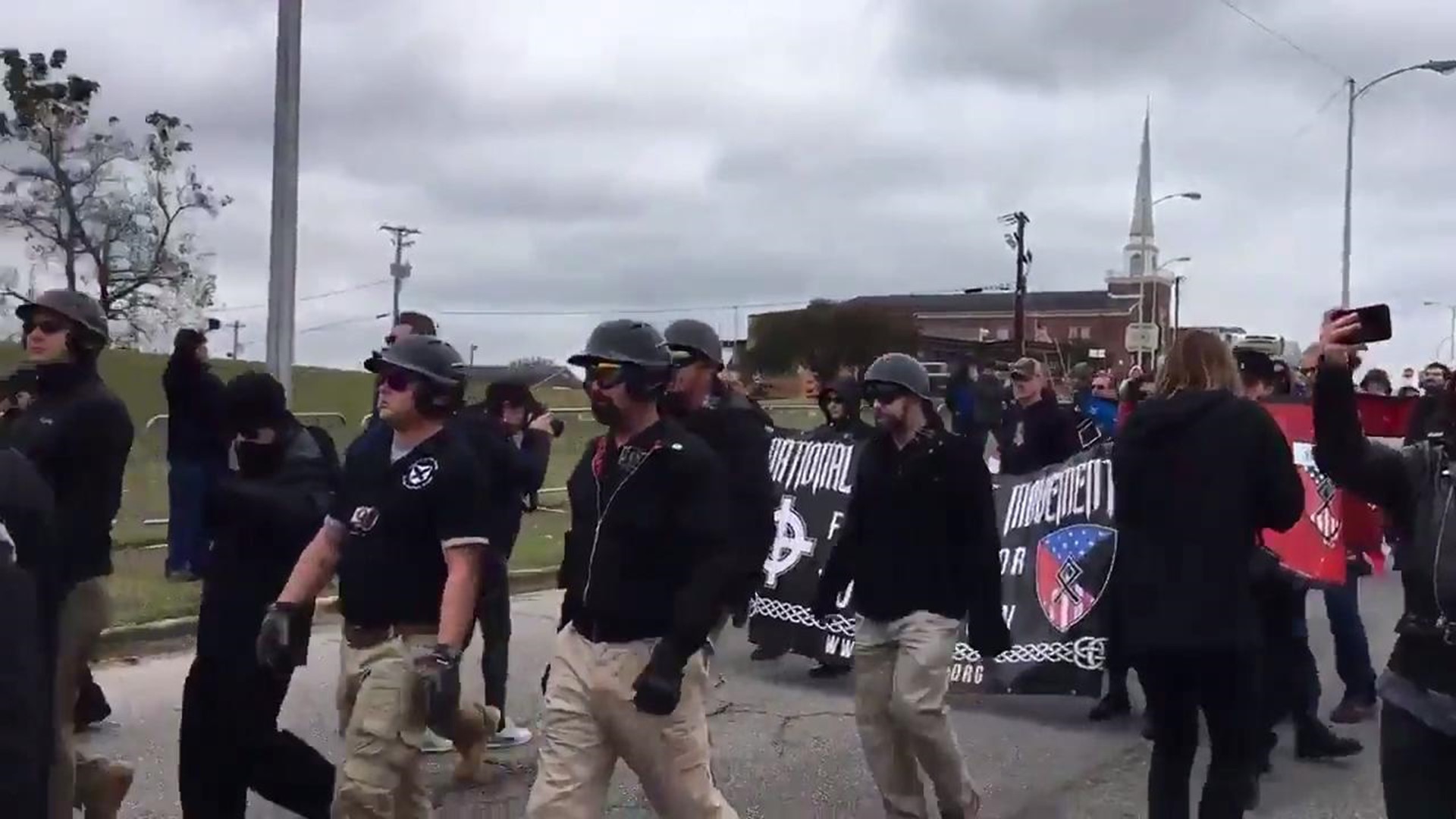 Some bore swastika tattoos and others wore "SS" bolt patches, perhaps unsurprising for a rally involving members of the National Socialist Movement. The Anti-Defamation League and Southern Poverty Law Center consider the movement to be the largest neo-Nazi group in the United States.

Matthew Heimbach of Paoli, Ind., who founded the Traditionalist Worker Party in 2013, speaks Oct. 28, 2017, at the White Lives Matter rally in Shelbyville, Tenn.

But the symbols weren't entirely what the event's organizers intended and ultimately contributed to division and bickering within the white nationalist community.

"I didn't want to start a scene with the KKK in Shelbyville," said Brad Griffin, a League of the South member who helped organize Saturday's rally in this Middle Tennessee city of about 22,000 residents that was a collaborative event with members of Nationalist Front. "The whole point of this was to do something peaceful."

The League of the South is a neo-Confederate group founded in 1994 that advocates for a second Southern secession with white elites running a pious nation.

Members of the so-called "alt-right," a term used to describe those who subscribe to a white nationalist and often anti-Semitic ideology promoted largely through social websites, have ridiculed Griffin and others in the Nationalist Front, which includes League of the South, National Socialist Movement, Traditionalist Worker Party and Vanguard America. The Montgomery, Ala.,-based Southern Poverty Law Center has labeled all four as hate groups.

Some in the movement believe that the white nationalists' symbols and tactics offend the general public and are hurting the overall cause.

Identity Evropa, founded in 2016, focuses on the preservation of white American culture, i.e. its European roots and identity.

Other leaders in the white nationalist alt-right movement echoed Damigo's sentiments. They seek to appeal more to the masses — people who would be turned off by the Ku Klux Klan and Nazi imagery — and try to target a more sophisticated demographic.

"This is what the infighting is about," said Marilyn Mayo, senior research fellow at the Anti-Defamation League's Center on Extremism. "It's about the people on one side who embrace National Socialism, who embrace the Klan, who embrace symbols of extremism, and those on the other side who really want to show a sort of suit-and-tie or khaki-and-polo-shirt version of the extremist movement."

The KKK, which Confederate veterans founded in Tennessee after the Civil War to target blacks that they viewed as threatening, is known for its white-clad members who wear pointy hats and participate in what they call cross lightings. The U.S. neo-Nazi movement traces its roots to the 1959 founding of the American Nazi Party.

The Traditionalist Worker Party, founded four years ago, fired back on Twitter, referring to Damigo as "an insecure, preening, back-stabbing weasel" who is overly concerned with his group's haircuts. Damigo's Twitter display name is "Fashy Haircut," a reference to the the side-fade male hairstyle associated with Nazi Germany and now popular among members of the alt-right.

Both Damigo and Nicholas Fuentes, another prominent alt-right figure, equated white nationalists covering their faces with helmets and masks and carrying shields to rallies with "LARPers," an online acronym for live-action, role-playing now commonly being used as an insult within white nationalism.

"If you can't see why the optics of today's TN rally are problematic for our goals, you are not prepared to be a part of a serious movement," Fuentes tweeted Saturday.

If you can't see why the optics of today's TN rally are problematic for our goals, you are not prepared to be a part of a serious movement.

Griffin indicated that some degree of jealousy of Nationalist Front's event, the largest white nationalist gathering since Unite the Right in Charlottesville, Va., according to the Anti-Defamation League, may be why members of the alt-right, who were invited to participate but declined, were critical.

"I think a lot of them were just mad we had a big demonstration and they weren’t a part of it," he said. Shelbyville is about 50 miles southeast of Nashville.

David Tillery of Tuscaloosa, Ala., walks away from a security checkpoint frustrated Oct. 28, 2017, because he’s not allowed to bring his cane into the White Lives Matter rally in Shelbyville, Tenn.

Others outside the movement have criticized participants in the White Lives Matter rally for not following through with plans they announced to hold a second event that afternoon about 30 miles north in Murfreesboro, Tenn., where an estimated 800 to 1,000 counterprotesters and hundreds of law-enforcement officers were awaiting their arrival.

Griffin has said Shelbyville and the planned rally in Murfreesboro were being held partially to prove that white nationalists weren't the ones who instigated violence against counterprotesters in Charlottesville.

Opposing sides were kept separate and no violence erupted during Saturday's rally, so in some ways Griffin and Nationalist Front accomplished their goal, Mayo said. But the event revealed other fissures.

"As you can see in the aftermath, for the movement itself it created more infighting," Mayo said of the rally. "I don’t think it’s a win or a loss (for them), really. It's just a sign of the fact that there's a lot of infighting and tension within the movement from different strands."

Griffin said he hadn't planned on having KKK and Nazi insignia at the rally and likely would have taken action if Klan members were wearing robes or if someone were carrying a Nazi flag, which would have looked worse for the group.

But KKK members and avowed Nazis still are necessary supporters of the white nationalist cause, he said.

"I'm not really thrilled about their way of doing things," Griffin said. "At the same time, we're all white nationalists and we're all pro-white."

How the general public or others in white nationalism perceive Griffin doesn't deter him.

"I expect to get called a racist or a Nazi anyway, so I don’t really give a damn," he said.

1 / 22
Shelley Mays, The Tennessean, via USA TODAY NETWORK
A man wearing a Confederate flag went through the counter protest gate and was escorted by police to the White Lives Matter rally during in Murfreesboro, Tenn., Oct. 28, 2017. 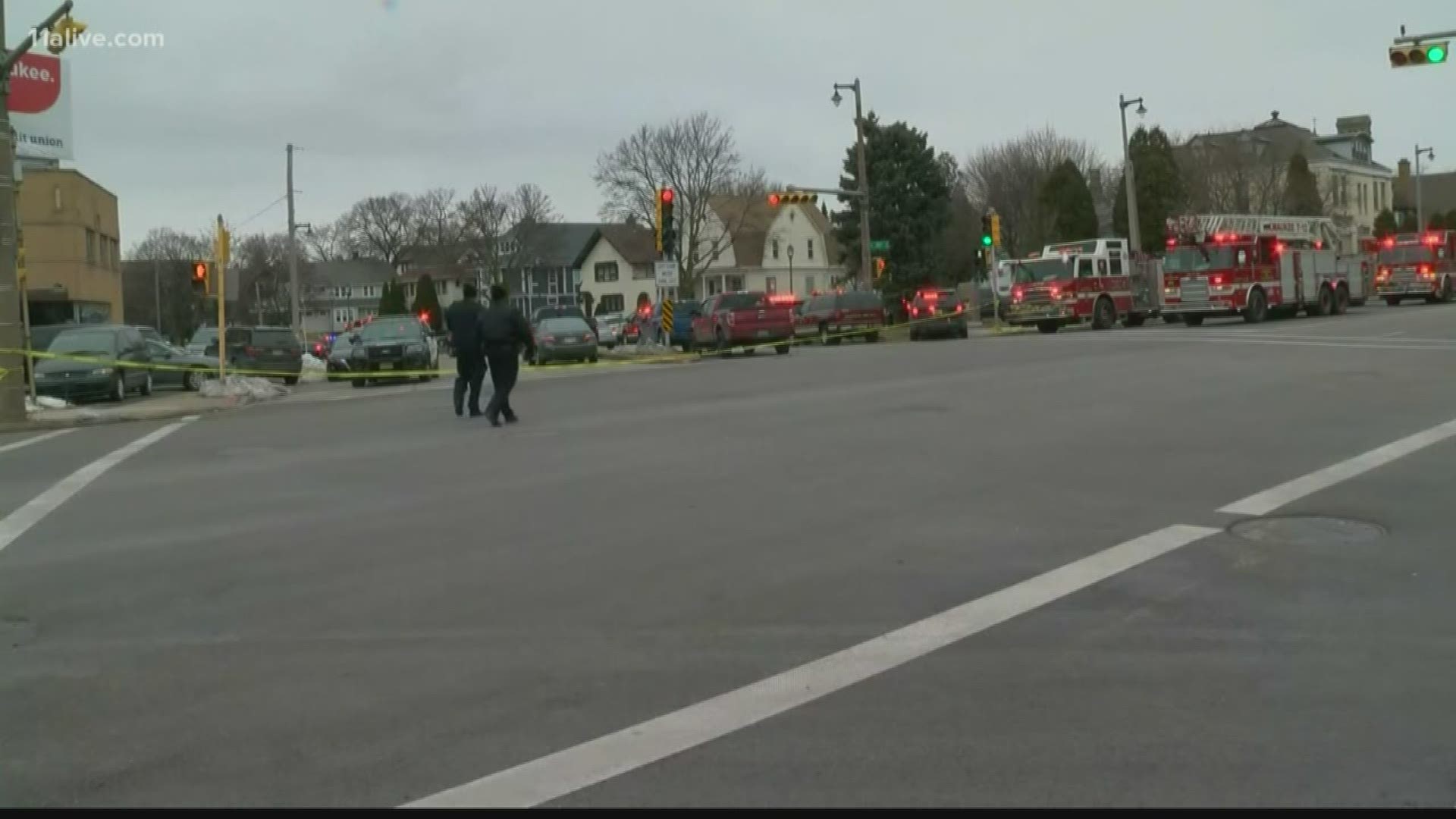