The man suspected of killing three and injuring 13 in a shooting in a France Christmas market has a police record and had been flagged for extremism. 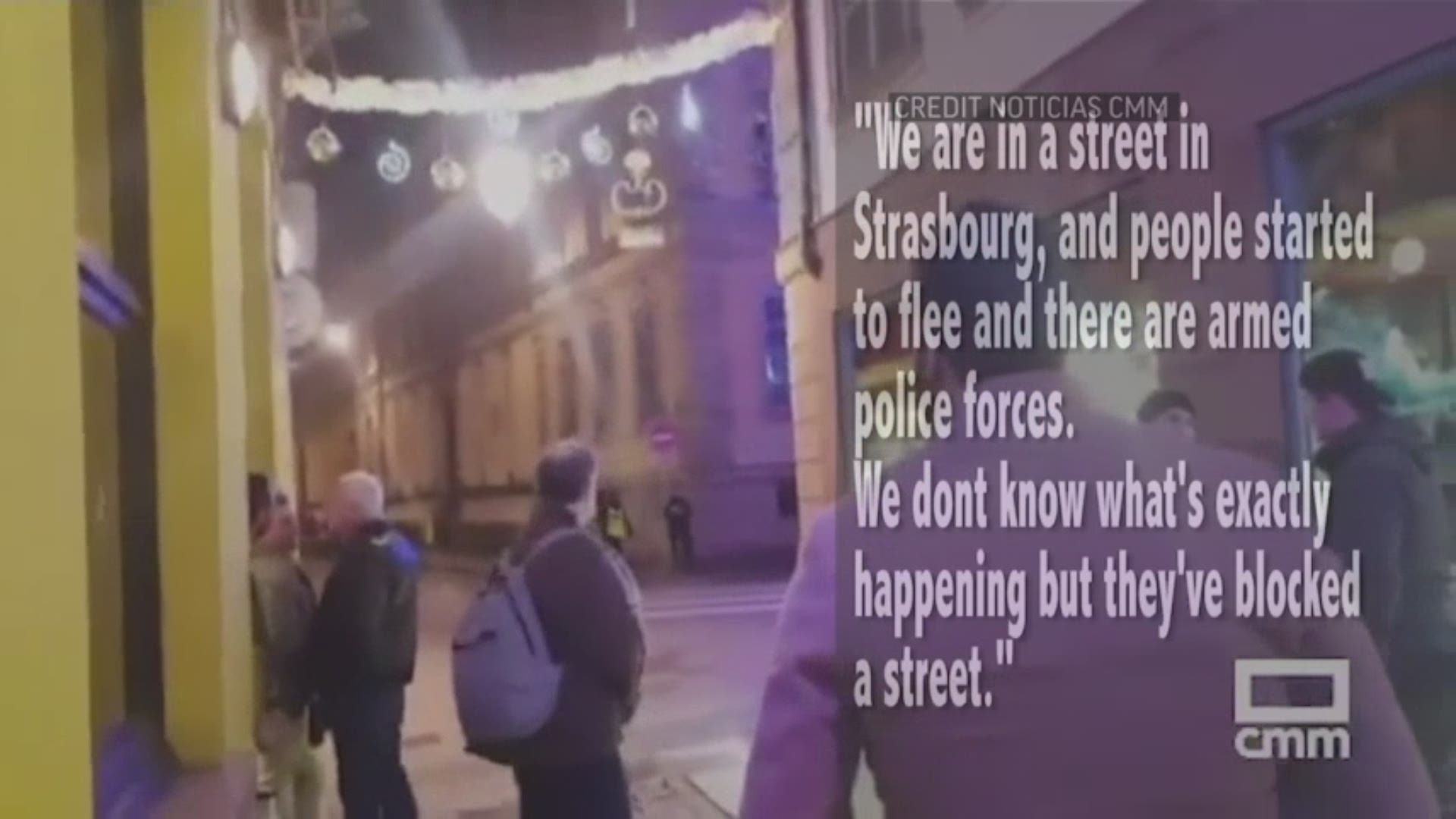 STRASBOURG, France — French authorities detained five people as they hunted Wednesday for a suspected extremist who sprayed gunfire at one of Europe's most famous Christmas markets in the eastern city of Strasbourg, killing three and wounding at least 13 and putting the whole country on edge anew.

The government raised the security alert level and sent police reinforcements to Strasbourg, where some 350 security forces are searching for the assailant. Police officials said he was wounded in a gunfight with soldiers after the Tuesday night attack but escaped, and a top official said he might have escaped to neighboring Germany.

The attacker is a 29-year-old with a police record in France and Germany who had been flagged for extremism, police said. Police detained five people in overnight searches around the city, Laurent Nunez, secretary of state for the Interior Ministry, said on France-Inter radio.

A terrorism investigation was opened, but the motive of the attack is unclear. Nunez said eight of the injured are in serious condition, and the city mayor said some had head wounds.

Witnesses described shots and screams after the gunman opened fire at the Christmas market Tuesday evening in a city that's home to the European Parliament and considers itself a capital of Europe — and promotes itself as the "capital of Christmas." For several hours swaths of the city were under lockdown.

The attack is a new blow to France, after a wave of Islamic extremist killings in 2015 and 2016, and amid a month of protests against President Emmanuel Macron that have blocked roads around the country, led to rioting in the capital and put heavy strain on police.

While authorities urged people in the area to stay inside after Tuesday's attack, Strasbourg Mayor Roland Ries told BFM television Wednesday that "life must go on" so that the city doesn't cede to a "terrorist who is trying to disrupt our way of life."

The assailant got inside a security zone around the venue and opened fire from there, Mayor Roland Ries said on BFM television.

One possible reason for the attack: police tried and failed to arrest him earlier Tuesday for an attempted murder, Nunez said. The suspect had been identified as radicalized during past stays in prison, Nunez added. Authorities did not identify him publicly.

Police were out in force in Strasbourg on Wednesday morning, and the Christmas market was closed. Strasbourg, a city about 500 kilometers (310 miles) east of Paris on France's border with Germany, promotes itself as the "Capital of Christmas" and the market set up around the local cathedral is a holiday tradition. The market was the target of an al-Qaida-linked plot at the turn of the millennium.

Many of Europe's deadliest terror attacks in recent years have taken place in France. In response to Tuesday's shooting, the government decided to take the country's attack risk up a level on the official threat index and to send security reinforcements to Strasbourg, Interior Minister Christophe Castaner said in Strasbourg.

Some 350 officers and two helicopters were searching for the assailant after Tuesday's drama, which involved shooting in multiple neighborhoods of Strasbourg, authorities said. The assailant confronted law enforcement officers twice, exchanging fire, while he "sowed terror," Castaner said.

The shooter was shot and wounded by soldiers guarding the Christmas market, according to Stephane Morisse of police union FGP Police.

"I heard two or three shots at around 7:55 p.m., then I heard screams. I got close to the window. I saw people running. After that I closed the shutters. Then I heard more shots, closer this time," said Yoann Bazard, 27, who lives in central Strasbourg.

"I thought maybe it's firecrackers," he said, speaking by phone. "And then, as it got close, it was really shocking. There were a lot of screams. ... There were police or soldiers shouting 'Get inside!' and 'Put your hands on your head.'"

Another witness, Peter Fritz, told the BBC one of the three people killed was a Thai tourist who was shot in the head and didn't respond to lengthy attempts to revive him.